November 23, 2016 at 2:18 PM ET by Billy Dec and Justin Trinidad
Twitter Facebook Email
Summary:
Filipino Americans have much to celebrate from the Obama Administration’s efforts over the past 8 years 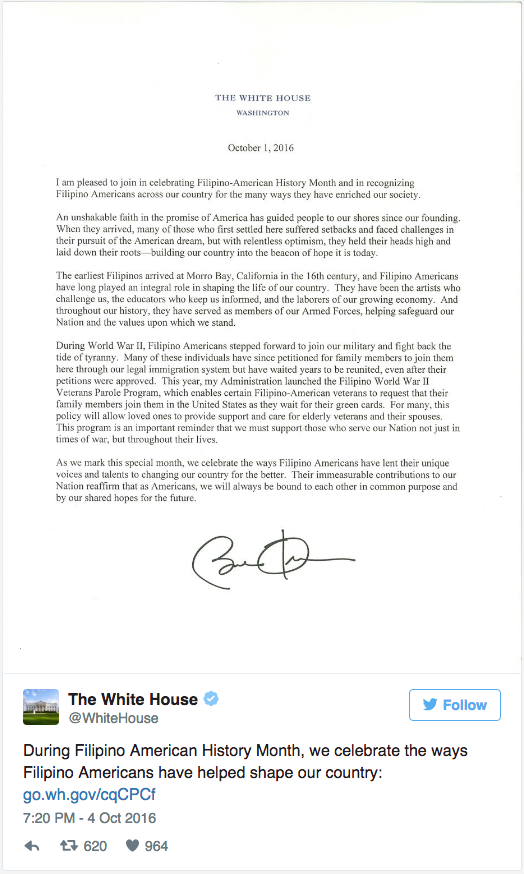 On October 24, the White House Initiative on Asian Americans and Pacific Islanders – housed in the Department of Education – and the White House Office of Public Engagement hosted the final White House Filipino American History Month celebration of President Obama’s Administration. The celebration brought together Filipino American federal agency representatives, elected officials, advocates, entrepreneurs, and community members to learn, discuss, and celebrate the Administration’s efforts on addressing the most important issues of the Filipino American community. The Filipino American National Historical Society’s (FANHS) National President, Judy Patacsil, kicked off the celebration by reminding participants of the earliest Filipinos who arrived at Morro Bay, California in the 16th century and the community’s many contributions thereafter. 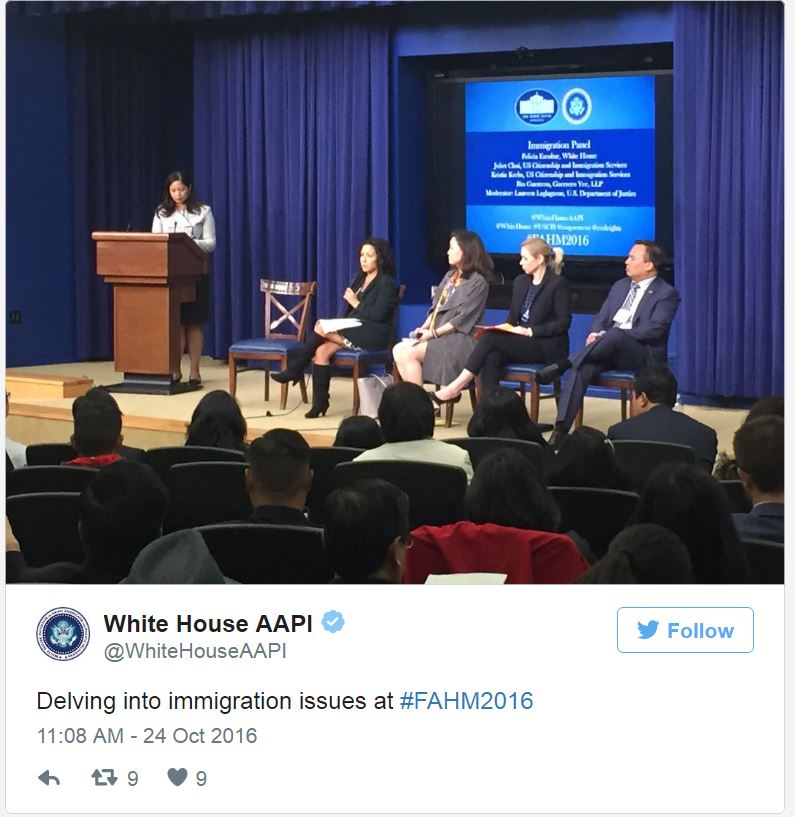 In the education panel, Mayor of West Sacramento Christopher Cabaldon moderated a discussion on the importance of disaggregating Asian American and Pacific Islander (AAPI) data in order to uncover disparities in education, and the need for the Filipino American community to be engaged in the implementation of the Every Student Succeeds Act. Following the education panel, key leaders in the movement for recognition of Filipino Veterans highlighted Filipino Veterans Equity Compensation Fund (FVEC), which has provided important financial relief for 15,000 veterans in the United States  and 9,000 veterans in the Philippines.  The immigration panel highlighted key programs carried out by the Administration including the U.S. Citizenship and Immigration Services’ Filipino WWII Veterans Parole Program and outreach efforts on Deferred Action on Childhood Arrivals (DACA). Finally, the health and mental health panel brought forth discussions on destigmatizing behavioral and mental health issues, the significance and impact of the Affordable Care Act, and health disparities within the AAPI population. 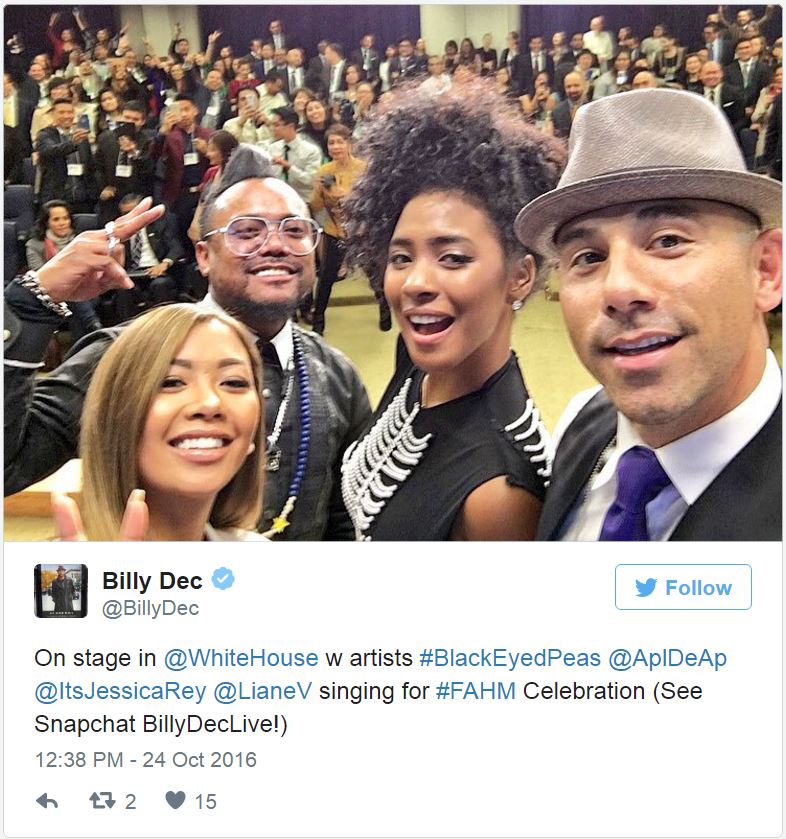 It would not have been a Filipino American celebration without live performances from Parangal, a San Francisco based Philippine Folk Dance Company; Broadway Barkada, featuring Filipino Americans starring on Broadway in New York; Apl.de.Ap of the Black Eyed Peas featuring The Voice Philippines’ Jessica Reyonoso; and singer Liane V. To close the program, U.S. Housing and Urban Development (HUD) Deputy Secretary Nani Coloretti spoke of her personal journey into public service and the importance of her identity as the highest ranking Filipino American in federal government. In addition, Deputy Secretary Coloretti highlighted HUD’s commitment to language access through in-language counseling services, which have assisted more than 30,000 AAPIs in home buying. 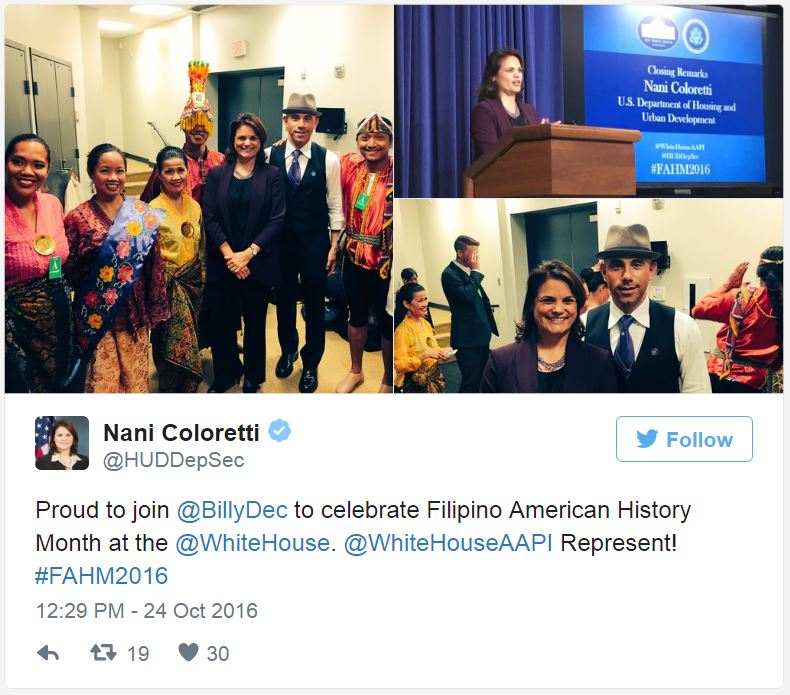 With much to celebrate, the fruitful conversations between the speakers and the vibrant audience cannot end here. As we have had the opportunity to pause and reflect on the contributions of Filipino Americans, we must continue these conversations in building on President Obama’s record with the Filipino American community.