It's Time to Rebuild America

Our nation's infrastructure has long been our economic backbone — a symbol for our might and dynamism. But we've been investing in it less and less — and right now, we have some work to do. Over the years, as our transportation spending has gone down, congestion and maintenance backlogs have gone up. 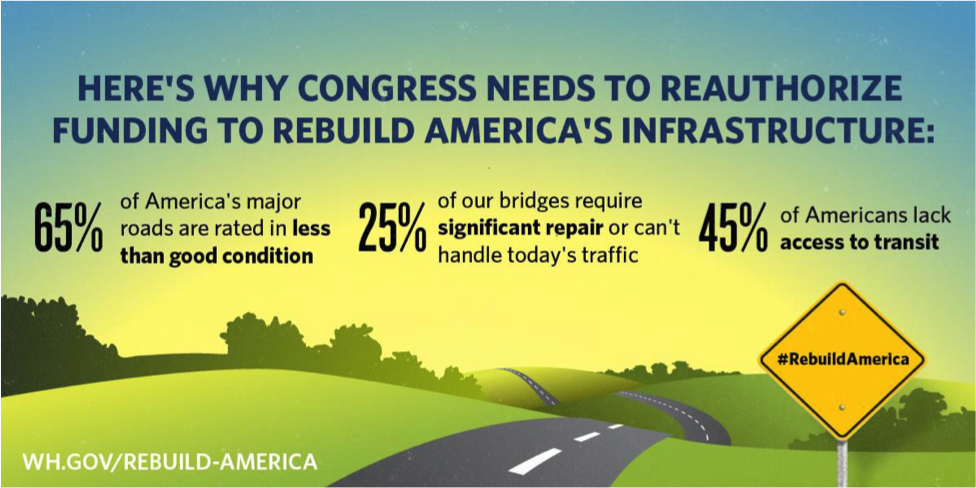 And we're falling behind our competitors internationally as a result. The President's plan would rebuild our roads and bridges in a smarter, more responsible way while supporting millions of jobs.

The Generating Renewal, Opportunity, and Work with Accelerated Mobility, Efficiency, and Rebuilding of Infrastructure and Communities throughout America Act, or GROW AMERICA Act, is a $478 billion, six year transportation reauthorization proposal that provides funding for our nation’s highways, bridges, transit, and rail systems. It would prevent Trust Fund insolvency for 6 years and increase investments to meet national economic goals. Learn More.

In July 2014, President Obama launched the Build America Investment Initiative to strengthen America’s infrastructure and increase private investment in areas like highways, bridges, ports and water systems. As we approach it's one year anniversary, President Obama is announcing new executive actions to help further accelerate our nation’s infrastructure development, including:

Fixing Infrastructure in My Community

How Does Infrastructure Get Fixed?

Infrastructure gets fixed in a variety of ways. Here is a quick overview:

Plan: Design the project – whether a bridge, highway, port or water system. Develop the cost estimates and timeline to complete the project.

Fund: Identify a way to pay for the project, for example, with federal grant dollars, state or local funding, tolls or some combination of these.

Operate and Maintain: It’s important to keep the infrastructure working well, whether it’s fixing potholes or repairing damns after flooding.

Getting an Infrastructure Project Funded

President Obama believes innovative financing centers can help get much-needed projects off the ground. Across the country we can put private capital to work revitalizing U.S. infrastructure. That’s why the Administration has taken active steps to grow public-private collaboration, including establishing three investment centers:

1. The Build America Transportation Investment Center (BATIC) at the Department of Transportation helps enable local governments and the private sector to utilize innovative finance tools and get needed transportation infrastructure projects off the ground. Learn more.

2. The Water Finance and Resiliency Center at the Environmental Protection Agency serves as a resource for local governments and the private sector looking for innovative financing tools and technical support for wastewater, drinking water and stormwater systems projects throughout the country. Learn more.