Get Up To Speed

Conceived in an era of landlines, eight-track tapes, and paper tickets, what we know as the modern internet began as a means of transmitting data in “packets” of information to create internal military communications networks. It quickly grew into something much bigger. Email became a primary means of communication. Social networks connected people across the globe. Learning became dynamic and digital.
Decades later, we’ve got high-speed-connected hand-held and wearable computers that manage our health, our time, and our student loans. We can use them to order a pizza, apply for a job, or book a flight. Entrepreneurs with a laptop and a connection create life-changing products and services out of thin air. The internet has forever changed the way we live, work, and play.
Here’s the challenge: While high-speed internet access is a given for millions of Americans, it remains out of reach for far too many. And as a result, they’re falling behind – from the educations they’re pursuing to the businesses they’re running.

Since 2009, the President has been delivering on a comprehensive plan to connect America – from our schools, to our homes, to our businesses. Federal government investments have led to the deployment or upgrading of well over 100,000 miles of network infrastructure, while 45 million additional Americans have adopted broadband.

These policies are based on a simple conviction: The opportunities afforded by high-speed internet access should be available to every American.

Here’s how we are connecting America. 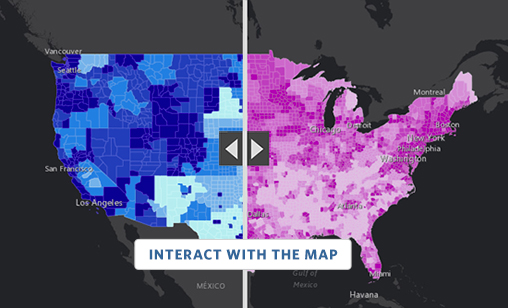 Right now, there is a digital divide in our nation.

Consider the fact that more than 90 percent of households with a college-educated parent use the internet – and fewer than 50 percent of households with less than a high-school education have internet access. And here’s what we know about students who don’t have broadband internet access at home: They perform worse on standardized tests, and have difficulty applying for and securing jobs. There are currently significant disparities in internet access. As more schools use the internet for interacting with students and customizing assignments, it’s not fair to let those disparities handicap the students and schools that are already behind in many other ways.
Deep dive: Map the digital divide in America
The Obama Administration just announced ConnectHome — a plan to bring high-speed broadband internet to low-income housing in 27 cities and one Native American tribal community.
That would mean that more than 275,000 low-income households — and nearly 200,000 of America’s most vulnerable children — will soon have internet access at home.
Deep dive: Learn how ConnectHOME works
Closing the digital divide can increase productivity and open ladders of opportunity, and so President Obama has made expanding broadband internet access a priority of his Administration. Since 2009, investments from the federal government have led to the deployment or upgrading of well over 100,000 miles of network infrastructure, while 45 million additional Americans have adopted broadband. The President’s ConnectED initiative aims to connect 99 percent of American students to high-speed broadband in their classrooms by 2018. And in January of this year the President announced several steps that the Administration would take to ensure that fast and reliable broadband is available to more Americans at lower cost, including efforts to promote community-based broadband and a call for State and local governments to roll back short-sighted regulations that restrict competition.

Connecting our Kids at School

New technology has created learning opportunities that are more interactive and personalized than ever before – and a good education and good jobs for our kids depend on having access to them. But fewer than 40 percent of America’s schools have the broadband they need to teach using today’s modern technology.

In June of 2013, the President announced an initiative called ConnectED, and it had a bold goal: Connecting 99 percent of American students to high-speed broadband in their classrooms by 2018.
Deep dive: Get the story behind how ConnectED was created
Today, we’re well on our way to reaching that goal. Because of ConnectED’s public and private sector commitments, billions of additional dollars will help wire America’s schools and libraries, and over 3 million students, across all 50 states, are using new educational tools that leverage higher-speed connections.
Deep dive: Learn more about how ConnectED works

Connecting Communities Across the Country

It’s a city of just 40,000 people – but its broadband internet is nearly 100 times faster than the national average.
Why? Because the people of that city came together to make strategic investments for their citizens and businesses. Through public-private partnerships, we’re making it easier for more cities to do that.
Deep dive: Hear the President on expanding access to high-speed broadband

High-speed broadband means faster download speeds, better streaming, and instant access to information.
In the 21st century, that means far more than watching YouTube videos. A slow connection means slow response times – and that could cost a small business a business deal or a customer relationship. It could mean they don’t have access to digital payroll systems that have the potential to bring their costs down. For a student, slow connections could mean you aren’t able to download resources you need to do your homework or take an exam. Those real-world consequences, taken together, make us less economically competitive.
Back in 2011, the President challenged the public and private sectors to work together to expand wireless access – with an ambitious goal of providing fourth generation (4G) mobile broadband to at least 98 percent of Americans. In early 2015, we announced that we reached that goal nearly two years ahead of schedule.
Deep dive: Learn more about the President's public-private broadband effort

One of the main reasons we’ve seen such incredible growth and innovation online is that most providers have treated internet traffic equally. So, in other words, an entrepreneur’s young company should have the same chance to use the internet to succeed as any huge, established corporation. Access to a high school student’s blog shouldn’t be slowed down unfairly to make way for advertisers with more money. That’s a principle known as “net neutrality” – something the President believes we need to protect.
Get the story behind net neutrality.
So what does this all add up to? A faster internet; more free and more fair; wired and wireless; urban and rural; in classrooms, libraries, and schools; across every kind of community.

Over the past seven years, under President Obama’s leadership the United States has expanded broadband access, bringing millions of people online and creating significant new economic, educational, and social opportunities.
Since the President took office, investments from the Federal government have helped deploy or upgrade more than 140,000 miles of network infrastructure, and more than 45 million additional Americans have adopted broadband Internet. The United States led the world in deployment of high-speed 4G/LTE mobile broadband and today it is available to over 98% of Americans. Moreover, the President’s ConnectED initiative, to deliver the benefits of technology and personalized learning to all the nation’s K-12 students, has closed the connectivity divide in U.S. schools by half. But, there is still more work to do, especially for the 51 percent of the lowest-income households that lack a wireline broadband connection at home. A recent analysis from the Council of Economic Advisers highlighted where this additional work is needed.

Add your name to receive important messages from the White House about connecting America — and the rest of the work we're doing.
This form is now closed.