I lost my job in 2001, after the tech meltdown. Was a senior IT manager for an Internet company in NY that went belly up. I applied to hundreds of jobs, after this disastrous event - nothing. I was never able to get a full time job, I guess due to my age (I am now 58), but got by on my considerable savings, and some minor real estate transactions. Of course I bade to take out private insurance. I was assured by the sales agent that rates rarely went up. Since 2001, my insurance premiums have gone up exactly one hundred per cent - and i have never had a serious illness of any sort. In the last 8 years, I have paid almost ONE HUNDRED THOUSAND DOLLARS in insurance premiums, for my wife and 1,to Blue Cross Blue Shield of Florida. I believed in then Senator Obama, when he said it was time for a change, that yes, he could be the one we could believe in to change things. I was one of the few where I live who put up Obama/Biden election signs (at my own expense, and at some personal risk from Republican goons, who tore them down every night) up and down US I and did other things (such as contributing $100 to the Senator’s campaign, and working with the local democratic party) to help him get elected - this in a conservative, often bigoted, religion-obsessed county, a place where Rush Limbaugh is actually taken seriously by many. Three month ago, my wife had to have minor arm surgery. Our insurance premium immediately went up 30 per cent, and this is the first claim we have ever put in. I now have to make do without insurance - I can longer afford it - and I am, I repeat, 58 years old, not exactly in my prime. But I guess people like my wife and I dont really matter to you, President Obama, or the rest of the Washington crowd; we are just disposable, powerless losers who will be forced to go through everything we own before we can one day qualify for Medicaid. Thank you, Mr. Obama, thank you so much for reminding me what Washington is really about, and how much my wife and I mean to you. I just have one question: how could you put aside what your own mother had to go through? Sorry for taking up your time. After all, I am nothing but a disposable old fool in your world, right? Good luck getting our vote next time around. I am even going to vote Green or sit out the midterm elections to teach you and your cynical coterie of advisers a very very small lesson about keeping one's promises. You betrayed me, Sir: shame on you. I will never forget it. 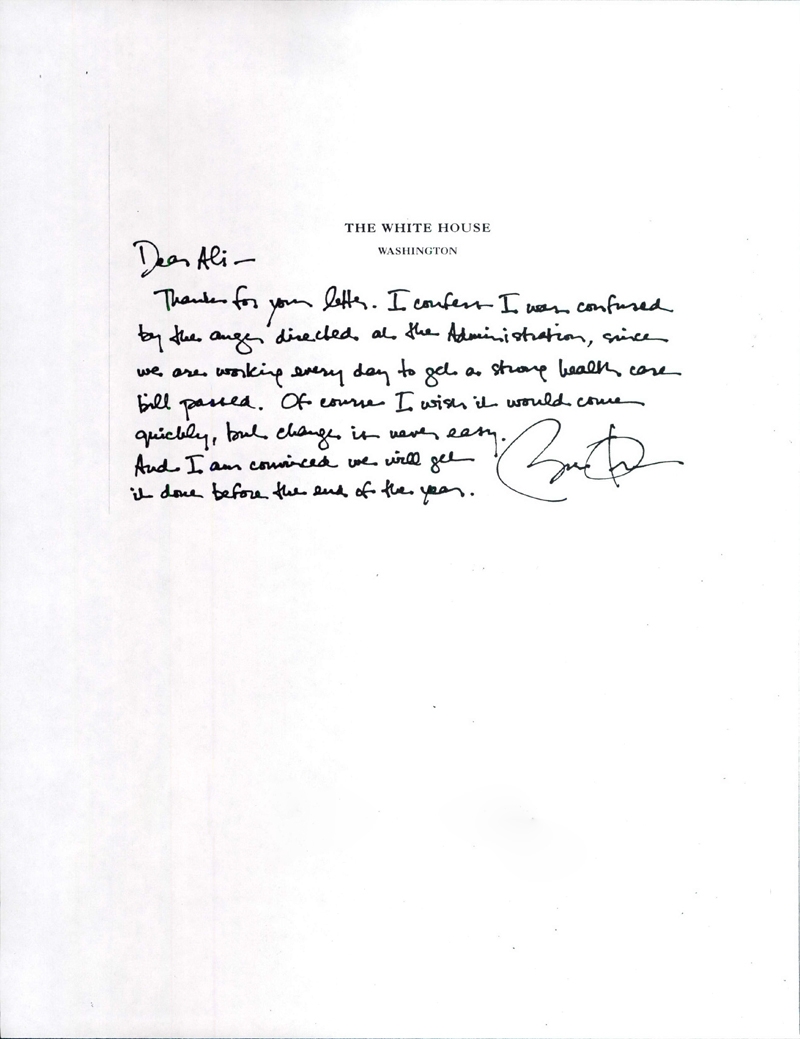 Thank you for your letter. I confess I was confused by the anger directed at the Administration, since we are working every day to get a strong health care bill passed. Of course I wish it would come quickly, but change is never easy. And I am convinced we will get it done before the end of the year.