Re: "Play anything but play it loud"

I served as a Marine Aviator in Vietnam and am a registered Republican. For the first time in my life, I did not vote for the Republican candidate in 2008. Many of us were excited about the possibility of having a leader who would break the Washington, DC political deadlock and champion legislation to strengthen the economy, improve Federal services and reduce public waste. These Obama votes should not be interpreted as an endorsement for a liberal agenda of big government, accelerated earmarks, union paybacks or astronomical budget deficits.

Your push for health care reform reminds me of a scene in Good Morning Vietnam when an artillery infantryman called in to Robin Williams to request a song. When Robin asked what song he wanted, the soldier's reply was "play anything but play it loud!" Your strategy on health care seems to be "pass anything but pass it by Christmas!"

Pressuring a 2,000 plus page health care bill through Congress before year end which (1) no one fully understands; and (2) does not address major expense and revenue issues is irresponsible. I guess you have decided that the near-term personal potential political capital outweighs the long-term financial debris which our children and grandchildren will inherit.

Any serious health care reform must include:

The Democrats have consistently described President George W. Bush as the most "financially irresponsible president in history." Nonetheless, since taking office ten months ago, the deficit has increased from $800 billion to $1.4 trillion. This is before health care reform and another Federal jobs stimulus package! 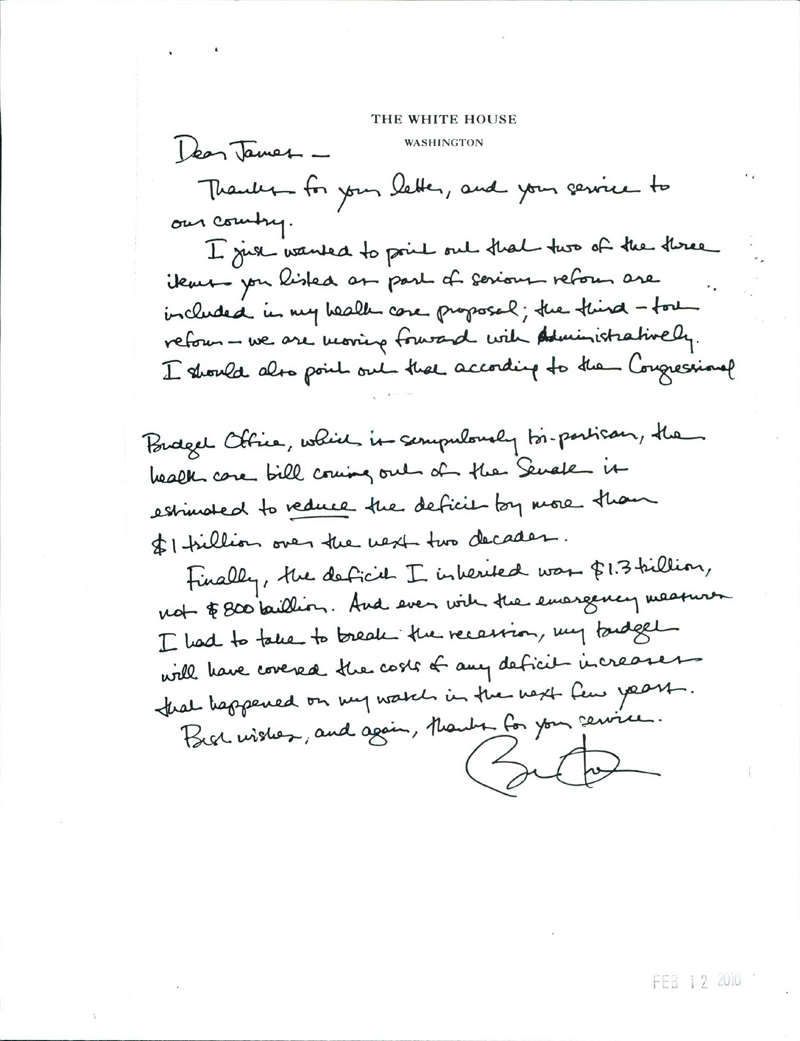 Thanks for your letter, and your service to our country.

I just wanted to print out that two of the three items you listed as part of serious reform are included in my health care proposal; the third — tort reform — we are moving forward with Administratively. I should also point out that according to the Congressional Budget Office, which is scrupulously bi-partisan, the health care bill coming out of the Senate is estimated to reduce the deficit by more than $1 trillion over the next two decades.

Finally, the deficit I inherited was $1.3 trillion, not $800 billion. And even with the emergency measures I had to take to break the recession, my budget will have covered the costs of any deficit increases that happened on my watch in the next few years.

Best wishes, and again, thanks for your service.