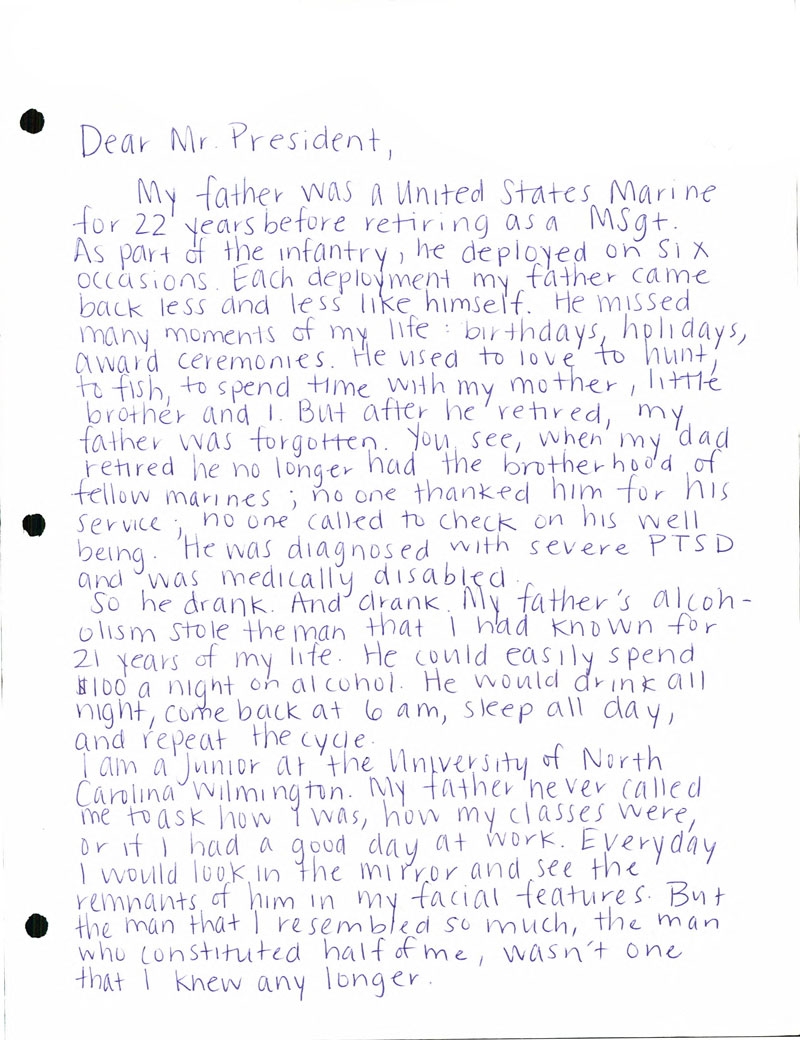 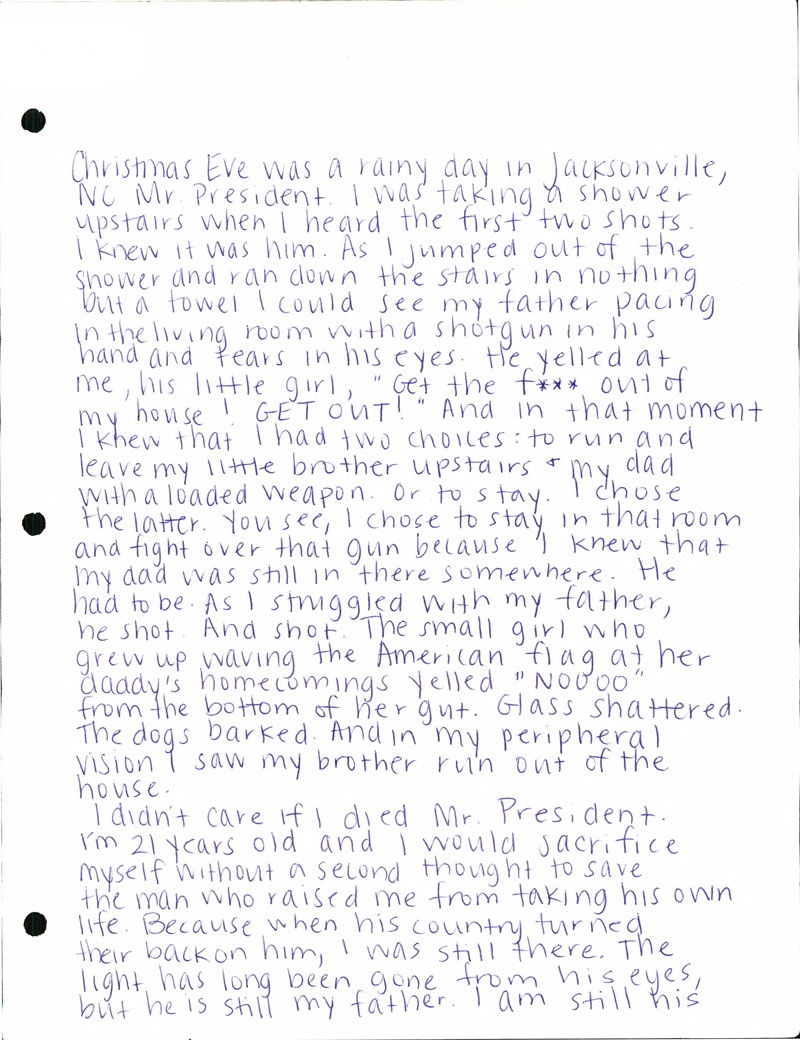 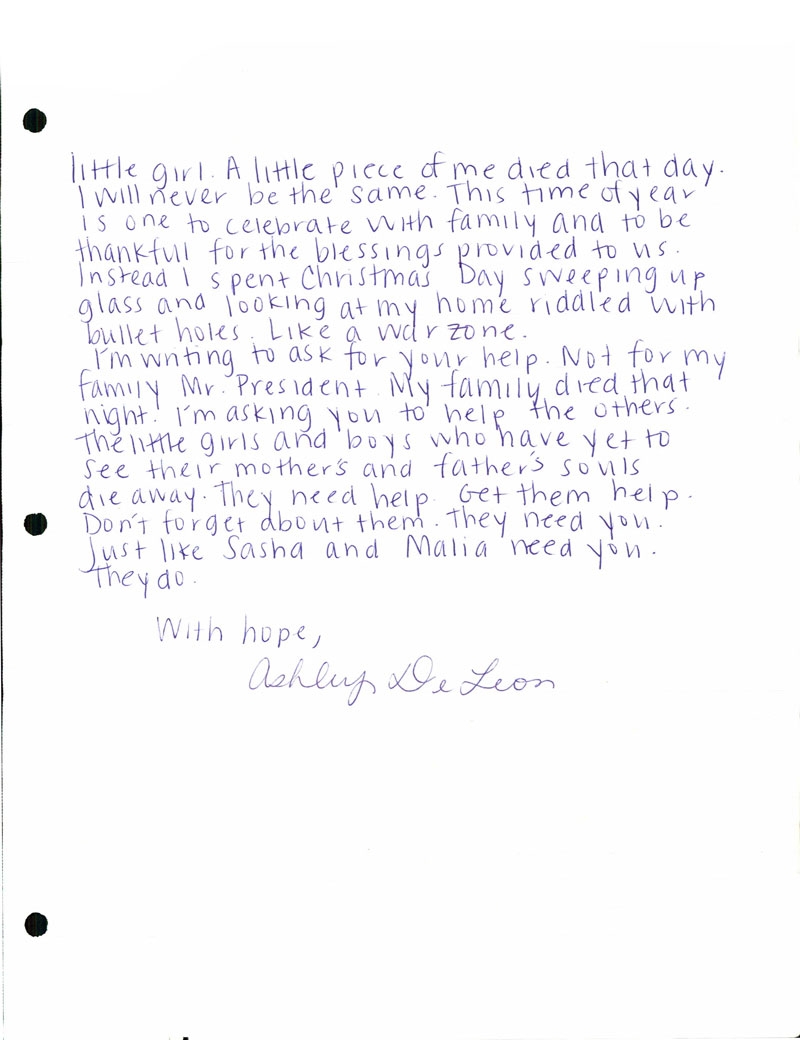 My father was a United States Marine for 22 years before retiring as a Msgt. As part of the infantry, he deployed on six occasions. Each deployment my father came back less and less like himself. He missed many moments of my life: birthdays, holidays, award ceremonies. He used to love to hunt, to fish, to spend time with my mother, little brother and i. But after he retired, my father was forgotten. You see, when my dad retired he no longer had the brotherhood of fellow marines; no one thanked him for his service; no one called to check on his well being. He was diagnosed with severe PTSD and was medically disabled.

So he drank. And drank. My father's alcoholism stole the man that I had known for 21 years of my life. He could easily spend $100 a night on alcohol. He would drink all night, come back at 6 am, sleep all day, and repeat the cycle.

I am a Junior at the University of North Carolina Wilmington. My father never called to ask how I was, how my classes were or if I had a good day at work. Everyday I would look in the mirror and see the remnants of him in my facial features. But the man that I resembled so much the man who constituted half of me, wasn't one that I knew any longer.

Christmas Eve was a rainy day in Jacksonville, NC Mr President. I was taking a shower upstairs when I heard the first two shots. I knew it was him. As I jumped out of the shower and ran down the stairs in nothing but a towel I could see my father pacing in the living room with a shotgun in his hands and tears in his eyes. He yelled at me, his little girl, "Get the f*** out of my house! GET OUT!" And in that moment I knew that I had two choices: to run and leave my little brother upstairs and my dad with a loaded weapon. Or to stay. I chose the latter. You see, I chose to stay in that room and fight over that gun because I knew that my dad was still in there somewhere. He had to be. As I struggled with my father, he shot. And shot. The small girl who grew up waving the American flag at her daddy's homecomings yelled "NOOOO" from the bottom of her gut. Glass shattered. The dogs barked. And in my peripheral vision I saw my brother run out of the house.

I didn't care if I died Mr. President. I'm 21 years old and I would sacrifice myself without a second thought to save the man who raised me from taking his own life. Because when his country turned their back on him, I was still there. The light has long been gone from his eyes, but he is still my father. I am still his little girl. A little piece of me died that day. I will never be the same. This time of year is one to celebrate with family and to be thankful for the blessing provided to us. Instead I spent Christmas Day sweeping up glass and looking my home riddled with bullet holes. Like a war zone.

I'm writing to ask for your help. Not for my family Mr. President. My family died that night. I'm asking you to help the others. The little girls and boys who have yet to see their mother's and father's souls die away. They need help. Get them help. Don't forget about them. They need you. Just like Sasha and Malia need you. They do. 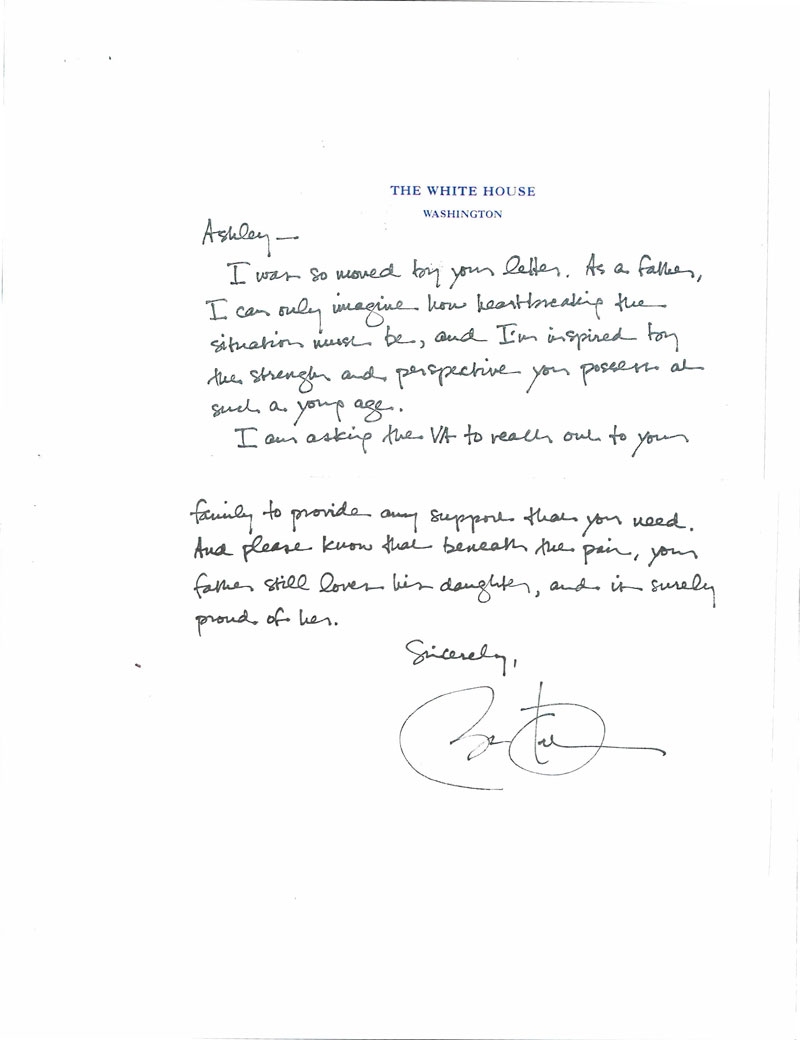 I was so moved by your letter. As a father, I can only imagine how heartbreaking the situation must be, and I'm inspired by the strength and perspective you posses at such a young age.

I am asking the VA to reach out to your family to provide any support that you need. And please know that beneath the pain, your father still loves his daughter, and is surely proud of her.