My name is Thomas J. Meehan III, father of Colleen Ann Meehan Barkow, age 26, who perished on September 11 2001 at the WTC. Colleen was an employee of Cantor-Fitzgerald working on the 103rd Floor. Her upper torso was found September 17th, 2001, the date of her first wedding anniversary. In the days and months afterwards there were to be additional discoveries of her, a total of six, which still did not amount to a whole body, but was more than what some other families affected have been given back, Families still speak in terms of body parts found and not found, and what will never be found.

In the past seven years, my wife and I have been committed to the issue of the ashen remains of those lost that day, which have been interred (bulldozed) into the 40 acres of land known as the Fresh Kills landfill on Staten Island, New York. For the one thousand families who did not receive any remains, this is the final resting place, an un-holy, un-consecrated landfill. The live lost are there with garbage beneath them and construction fill above them, an unbefitting resting place for those we called heroes and took an oath never to forget.

While this issue has been before the courts, and remains may in fact be permanently interred at the landfill, parents, spouses, siblings, extended family members must live with the knowledge that their loved ones lie in what was the world’s largest dump. How we as a society will be judged in the treatment of those lost, only history will record.

My wife and I mourn the continued loss of Americans in the war in Iraq and Afghanistan while we still await the apprehension and trial of those we hold responsible for the death of our daughter and almost 3000 other American and international citizens.

While we understand the reasons for closure of the detention facility at Guantanamo Bay, we urge you to allow the trials of those defendants charged in connection with the attacks of September 11, 2001, to go forward and complete the judicial process and give some small measure of justice to all of the 9/11 family members, while we still await the capture of Osama Bin Laden.

Our lives have been forever changed by the events of September 11, 2001, and yet life goes on, we now have two granddaughters, Brett Colleen, age four an and Ryann Elizabeth, age two, we hope that their lives will be in a better world that the one which claimed their aunt. And they will have the opportunities to live their lives to the fullest and live in a safer world, free of the threat of terrorism.

I share these facts with you so that you will understand why these issues mean so much to us, and ask that you not forget the promise “Never to Forget”, and will bring to justice those responsible for September 11, 2001.

God Bless You and You’re Family,

May the Peace of the Lord Be Upon You and Remain With You,​ 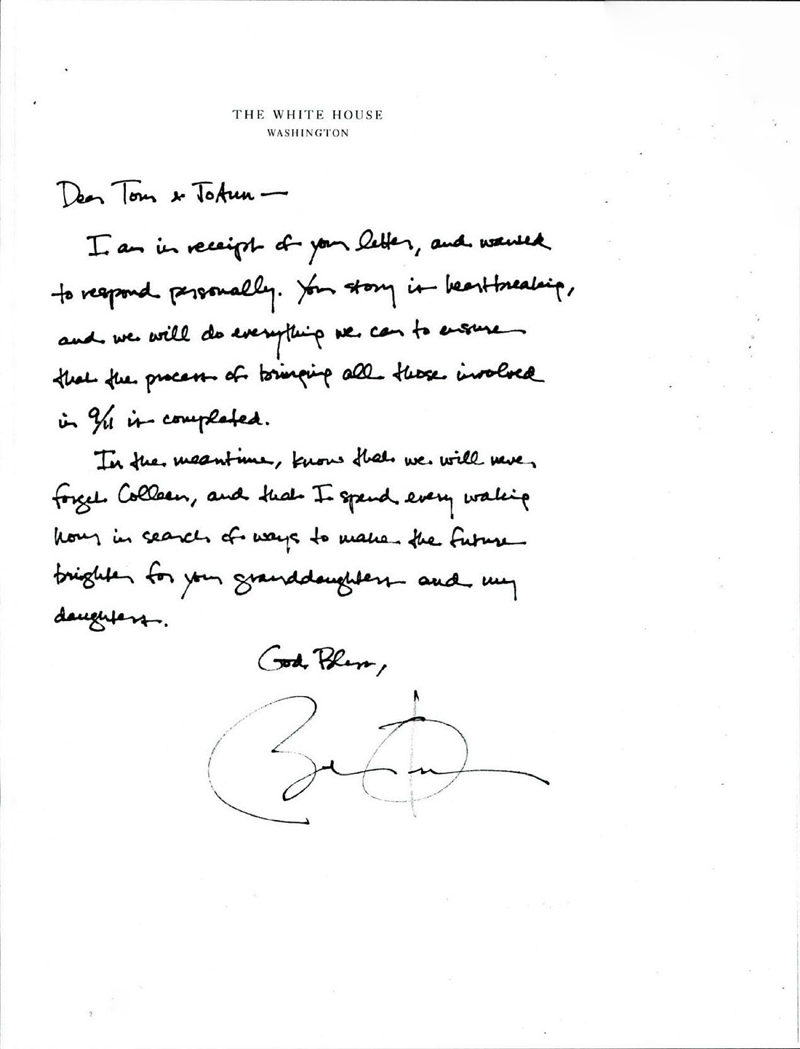 I am in receipt of your letter, and wanted to respond personally. Your story is heartbreaking, and we will do everything we can to ensure that the process of bringing all of those involved in 9/11 is complete is completed.

In the meantime, know that we will never forget Colleen, and that I spend every waking hour in search of ways to make the future brighter for your granddaughters and my daughters.