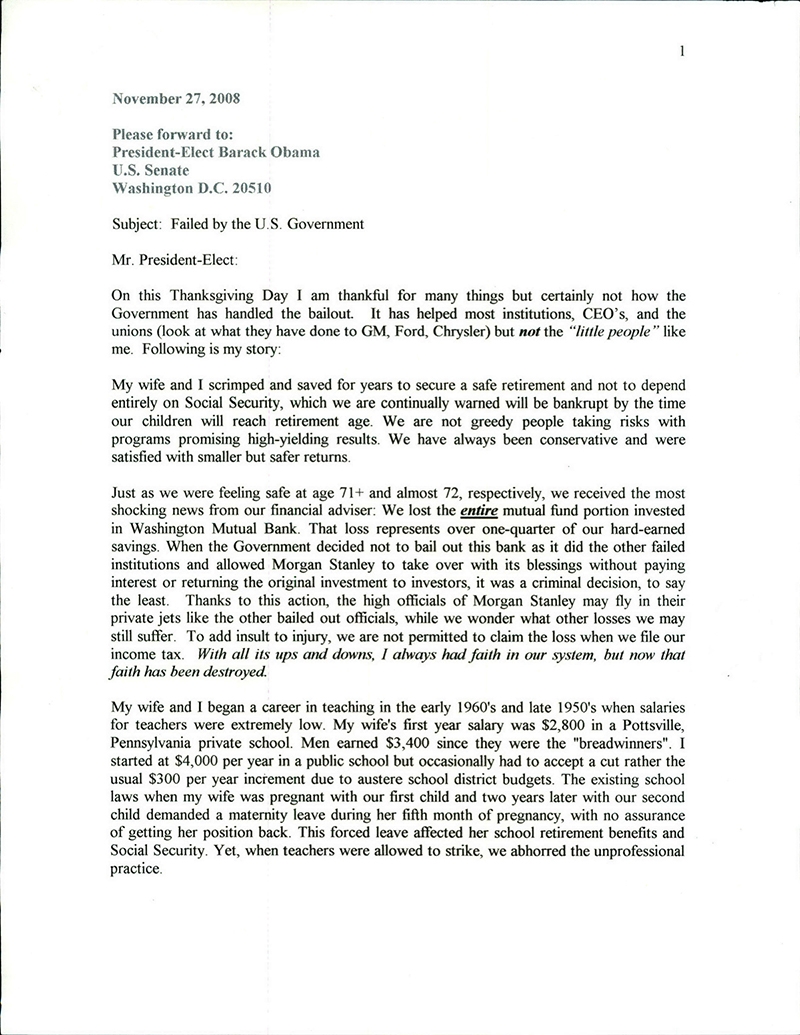 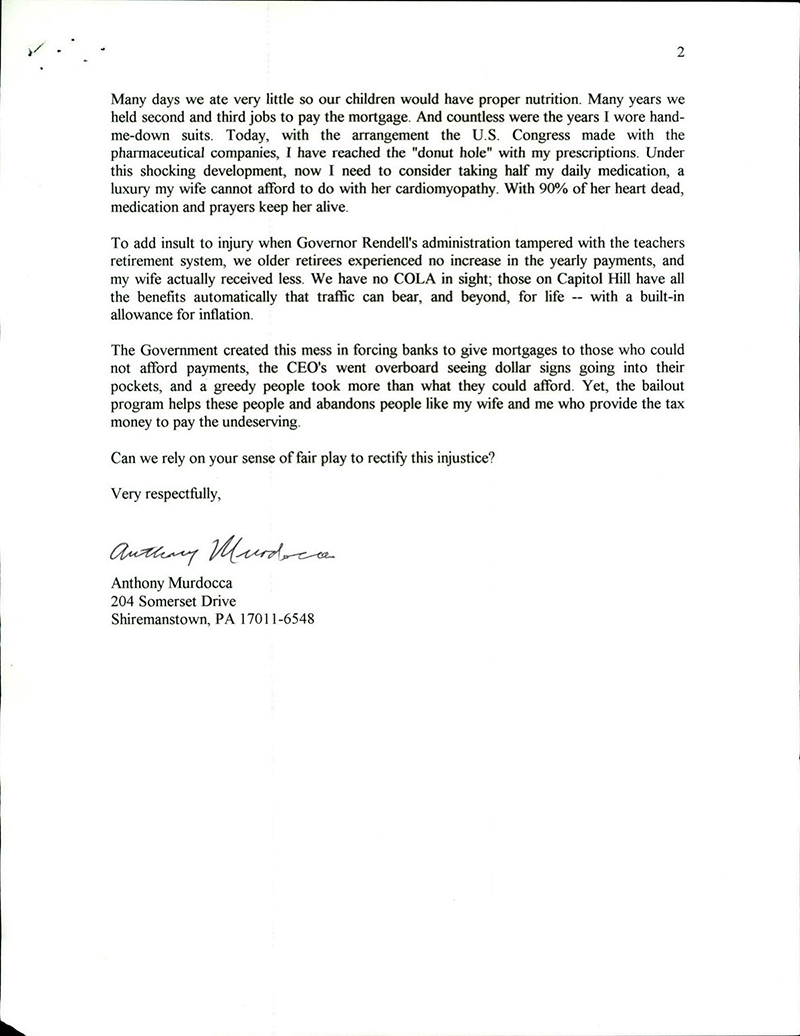 Subject: Failed by the U.S. Government

On this Thanksgiving Day I am thankful for many things but certainly not how the Government has handled the bailout. It has helped most institutions, CEO's, and the unions (look at what they have done to GM, Ford, Chrysler) but not the "little people" like me. Following is my story:

My wife and I scrimped and saved for years to secure a safe retirement and not to depend entirely on Social Security, which we are continually warned will be bankrupt by the time our children will reach retirement age. We are not greedy people taking risks with programs promising high-yielding results. We have always been conservative and were satisfied with smaller but safer returns.

Just as we were feeling safe at age 71 + and almost 72, respectively, we received the most shocking news from our financial adviser: We lost the entire mutual fund portion invested in Washington Mutual Bank. That loss represents over one-quarter of our hard-earned savings. When the Government decided not to bail out this bank as it did the other failed institutions and allowed Morgan Stanley to take over with its blessings without paying interest or returning the original investment to investors, it was a criminal decision, to say the least. Thanks to this action, the high officials of Morgan Stanley may fly in their private jets like the other bailed out officials, while we wonder what other losses we may still suffer. To add insult to injury, we are not permitted to claim the loss when we file our income tax. With all its ups and downs, I always had faith in our system, but now that faith has been destroyed.

My wife and I began a career in teaching in the early 1960's and late 1950's when salaries for teachers were extremely low. My wife's first year salary was $2,800 in a Pottsville, Pennsylvania private school. Men earned $3,400 since they were the "breadwinners". I started at $4,000 per year in a public school but occasionally had to accept a cut rather the usual $300 per year increment due to austere school district budgets. The existing school laws when my wife was pregnant with our first child and two years later with our second child demanded a maternity leave during her fifth month of pregnancy, with no assurance of getting her position back. This forced leave affected her school retirement benefits and Social Security. Yet, when teachers were allowed to strike, we abhorred the unprofessional practice.

Many days we ate very little so our children would have proper nutrition. Many years we held second and third jobs to pay the mortgage. And countless were the years I wore hand-me-down suits. Today, with the arrangement the U.S. Congress made with the pharmaceutical companies, I have reached the "donut hole" with my prescriptions. Under this shocking development, now I need to consider taking half my daily medication, a luxury my wife cannot afford to do with her cardiomyopathy. With 90% of her heart dead, medication and prayers keep her alive.

To add insult to injury when Governor Rendell's administration tampered with the teachers retirement system, we older retirees experienced no increase in the yearly payments, and my wife actually received less. We have no COLA in sight; those on Capitol Hill have all the benefits automatically that traffic can bear, and beyond, for life -- with a built-in allowance for inflation.

The Government created this mess in forcing banks to give mortgages to those who could not afford payments, the CEO's went overboard seeing dollar signs going into their pockets, and a greedy people took more than what they could afford. Yet, the bailout program helps these people and abandons people like my wife and me who provide the tax money to pay the undeserving.

Can we rely on your sense of fair play to rectify this injustice? 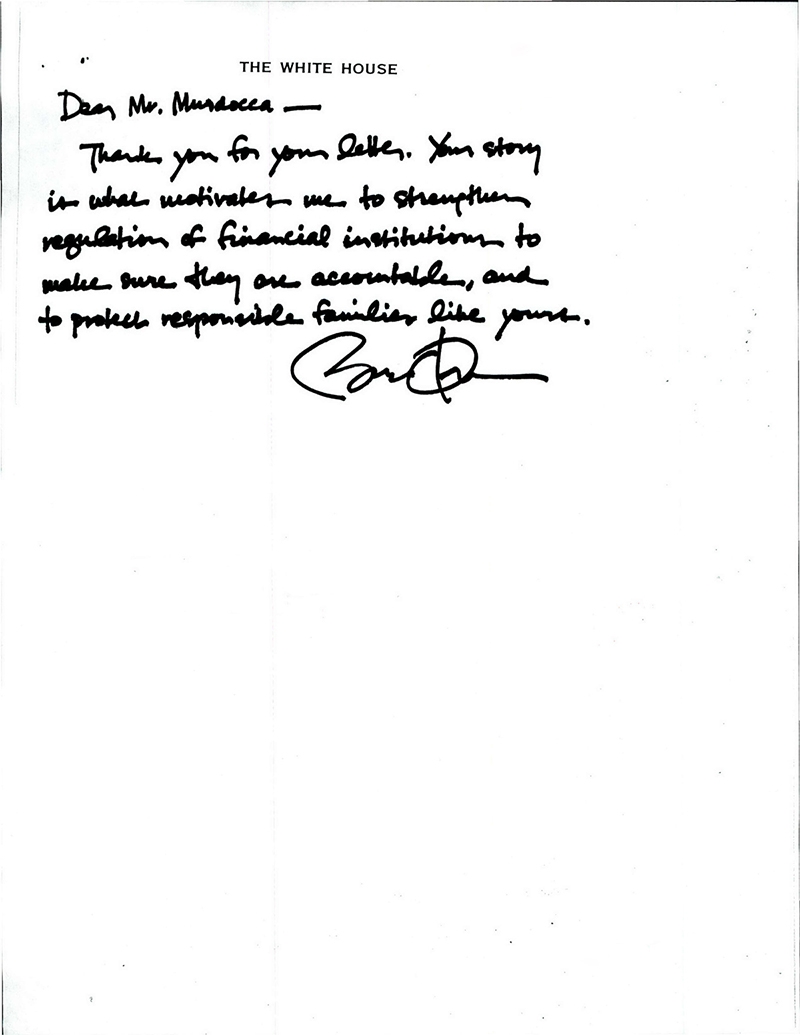 Thank you for your letter. Your story is what motivates me to strengthen regulations of financial institutions to make sure they are accountable and protect responsible families like yours.