for the 21st century

The President has outlined his vision of an America built to last—where an educated, skilled workforce has the knowledge, energy and expertise to compete in the global marketplace. Yet—for far too many Americans—that vision is limited by drug use, which not only limits the potential of the individual, but jeopardizes families, communities and neighborhoods.

The economic costs of drug use are enormous: In 2007 alone, illicit drug use cost our Nation more than $193 billion in lost productivity, healthcare, and criminal justice costs. But the human costs are worse. Nationwide, drug-induced overdose deaths now surpass homicides and car crash deaths in America.

The Obama Administration’s plan to reduce drug use and its consequences—the National Drug Control Strategy—represents a 21st century approach to drug policy. This science-based plan, guided by the latest research on substance use, contains more than 100 specific reforms to support our work to protect public health and safety in America. 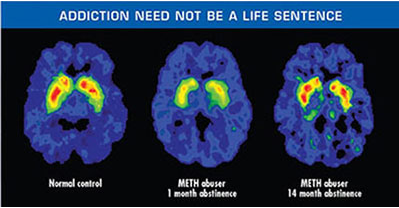 Throughout much of the last century, scientists studying drug abuse labored in the shadows of powerful myths and misconceptions about the nature of addiction. When science began to study addictive behavior in the 1930s, people addicted to drugs were thought to be morally flawed and lacking in willpower. Those views shaped society's responses to drug abuse, treating it as a moral failing rather than a health problem, which led to an emphasis on punitive rather than preventative and therapeutic responses.

Even now, discussion of substance use disorders is too often relegated to the shadows, steeped in stigma and misunderstanding.

Today, thanks to significant advances in neuroscience, our Nation's responses to drug abuse have begun to change. Groundbreaking discoveries about the brain have revolutionized our understanding of drug addiction, enabling us to respond more effectively to the problem.

“This issue touches every family and every community in one way or another. There are millions of Americans – including myself – who are in successful long-term recovery from a substance use disorder. This policy supports each and every one of us and demonstrates a real commitment to a smarter, more humane approach to drug policy in the 21st century.”

Science demonstrates that addiction is a disease of the brain—a disease that can be prevented and treated, and from which people can recover. The Administration's drug policy reflects this understanding by emphasizing prevention and access to treatment over incarceration, pursing "smart on crime" rather than "tough on crime" approaches to drug-related offenses, and support for early health interventions designed to break the cycle of drug use, crime, incarceration, and re-arrest.

“ [T]his Administration remains committed to a balanced public health and public safety approach to drug policy. This approach is based on science, not ideology—and scientific research suggests that we have made real progress.”

Advocates for Action: Pam Rodriguez and Melody Heaps
Pamela Rodriguez and Melody Heaps are re-designing the criminal justice system to break the cycle of addiction, arrest, and incarceration.
Advocate for Action: Dr. Steven Loyd
Dr. Steven Loyd is working to educate other physicians about safe prescribing practices after entering recovery from a substance use disorder involving prescription drugs himself.
Advocate for Action: Judge Robert Russell
Judge Robert Russell is helping link veterans struggling with substance use disorders to the programs, benefits, and services they have earned.

While law enforcement will always play a vital role in protecting our communities from drug-related crime and violence, we simply cannot incarcerate our way out of the drug problem. Put simply, an enforcement-centric “war on drugs” approach to drug policy is counterproductive, inefficient, and costly. At the other extreme, drug legalization also runs counter to a public health and safety approach to drug policy. The more Americans use drugs, the higher the health, safety, productivity, and criminal justice costs we all have to bear.

The Administration's 21st century drug policy plan provides an evidence based alternative to these approaches. Here's how it works.

Emphasizing prevention over incarceration. Preventing drug use before it begins— particularly among young people— is the most cost-effective way to reduce drug use and its consequences. In fact, recent research has concluded that every dollar invested in school-based substance use prevention programs has the potential to save up to $18 in costs related to substance use disorders.

That's why the President's plan promotes the expansion of national and community-based programs—such as the Drug Free Communities Support Program—that reach young people in schools, on college campuses, and in the workplace with tailored information designed to help them make healthy decisions about their future. But prevention alone isn't enough.

Training health care professionals to intervene early before addiction develops. Early detection and treatment of a substance use problem by a doctor, nurse, or other health care professional is much more effective and less costly than dealing with the consequences of addiction or criminal justice involvement later on. Therefore, the Administration's plan works to expand programs that train health care professionals to identify and treat problematic drug use before the condition becomes chronic. By supporting programs like Screening, Brief Intervention, and Referral to Treatment, we can promote healthy lifestyles, prevent addictive disorders from taking hold, and reduce the number of people entering the criminal justice system. For too many, however, drug use has progressed to the point of a disorder and requires treatment.

Expanding access to treatment. Today, about 22 million Americans need treatment for a substance use disorder, and yet only 2 million—about 1-in-10—actually receive the treatment they need. This is unacceptable. Research shows that addiction is a disease from which people can recover. In fact, success rates for treating addictive disorders are roughly on par with recovery rates for other chronic diseases such as diabetes, asthma, and hypertension.

Recognizing this, the Obama Administration has taken unprecedented action to expand access to treatment for millions of Americans. Through the Affordable Care Act, insurance companies will be required to cover treatment for addiction just as they would cover any other chronic disease. We estimate that with the Affordable Care Act, 62.5 million people will receive expanded substance abuse benefits by 2020, with 32.1 million gaining those benefits for the first time. To support this expansion, the President's FY 2014 Budget includes an increase of $1.4 billion for treatment over the FY 2012 amount, the largest such request for treatment funding in decades.

Taking a "smart on crime" approach to drug enforcement. Drugs and crime are often linked, which is why addressing serious drug related crime and violence will always be a vital component of our plan to protect public health and safety in America. But at the end of the day, we cannot arrest our way out of the drug problem. The Obama Administration has made clear we will not focus limited Federal drug enforcement resources on individual drug users. Instead, our drug policy emphasizes the expansion of innovative "smart on crime" strategies proven to help break the cycle of drug use, crime, arrest, and incarceration.

Our plan calls for substantial reforms to the Nation's criminal justice system to lower incarceration rates and reduce recidivism while protecting public safety: Reforms like the expansion of specialized courts that divert non-violent drug offenders into treatment instead of prison. Reforms like smart diversion programs that identify first time offenders who have a substance use disorder and provide community health services instead of a jail cell or arrest record. Reforms like reentry programs, which help guide former offenders back into society, support their recovery from addiction, and help them avoid a return to the criminal justice system.

Giving a voice to Americans in recovery. Millions of Americans successfully make the journey from addiction to recovery. Yet too often, these Americans face barriers to maintaining their sobriety, including a lack of access to housing, employment, or even getting a driver's license or student loan.

In support of the roughly 23 million Americans in recovery today, the President's plan seeks to eliminate legislative and regulatory barriers facing Americans who have made the successful journey from addiction to sobriety. As part of this effort, the Obama Administration has, for the first time, established a Recovery Branch at the Office of National Drug Control Policy to support Americans in recovery and help lift the stigma associated with addiction.

Being honored for his role in beginning the National African American Drug Policy Coalition.
Learn More

Improving clinical, administrative and educational practices in the field of substance use disorders.
Learn More

Helping individuals with substance use disorders find and maintain their recovery through sport.
Learn More

Identifying and promoting new strategies to reduce illegal drug use and its consequences.
Learn More

Our Record of Reform

Drug policy reform is already underway. To learn more about the Administration’s approach, sign up for updates.