The Eisenhower Executive Office Building (EEOB) is located next to the West Wing, and houses a majority of offices for White House staff. Originally built for the State, War, and Navy Departments between 1871 and 1888, the EEOB is an impressive building that commands a unique position in both our national history and architectural heritage.

Designed by Supervising Architect of the Treasury Alfred Mullett, the granite, slate, and cast iron exterior makes the EEOB one of America’s best examples of the French Second Empire style of architecture. Construction took 17 years as the building slowly rose wing by wing. The EEOB was finished in 1888 and was the largest office building in Washington with nearly 2 miles of black and white tiled corridors. 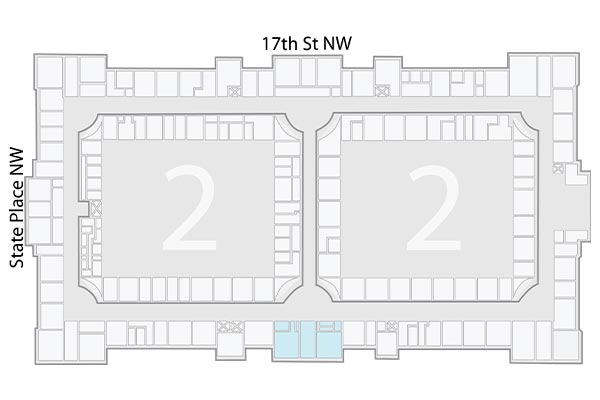 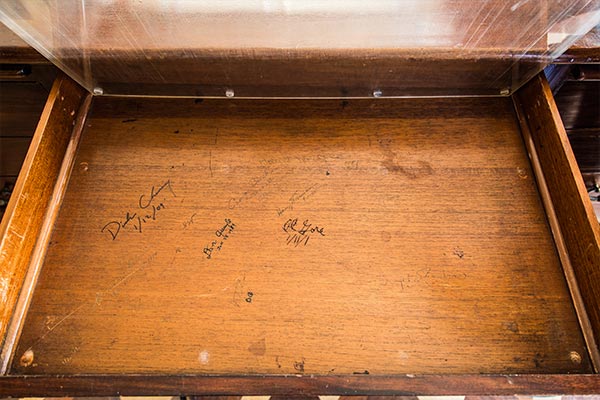 The current Vice President's Ceremonial Office was originally used as the Secretary of Navy's office from 1879 to 1923. From 1923 to 1947, General John Pershing occupied the office initially as the Army Chief of Staff then as the Chairman of the Battle and Monuments Commission, becoming the longest single occupant of this room (24 years). Additionally, President Hoover used the office for three months following a Christmas Eve fire in the West Wing in 1929.

Since 1960 it has been used as the Vice President's Ceremonial Office with the exception of Vice President Hubert Humphrey, because Lyndon Johnson did not give up the office when he became President after the Kennedy assassination.

The current desk is part of the White House collection, and was commissioned to be built for Theodore Roosevelt's use in the Oval Office. Several important figures have used the desk including Presidents Taft, Wilson, Harding, Coolidge, and for a few months, Hoover. The desk was placed in storage early on during Herbert Hoover's Presidency where it remained until 1945 when President Truman then used it. Vice President Johnson and all subsequent Vice Presidents (except Hubert Humphrey) have used the desk. Since the 1940s, various users have signed the inside of the top drawer.

The top drawer has been signed by Vice Presidents Cheney, Gore, Quayle, Mondale, and Rockefeller; and Presidents Truman and Eisenhower. 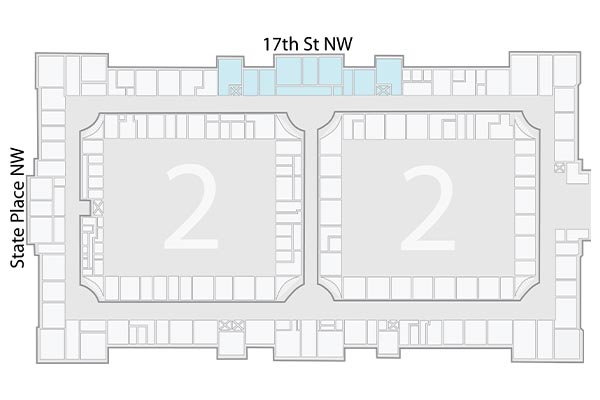 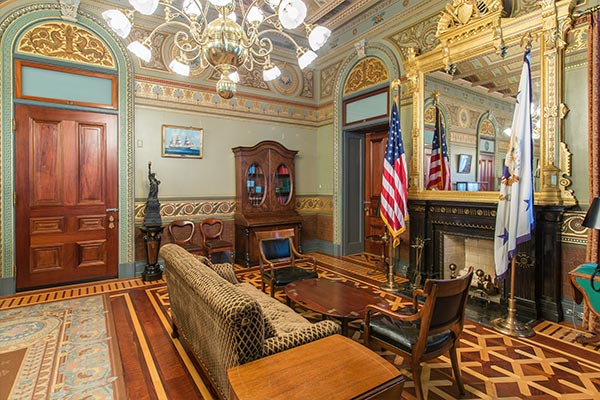 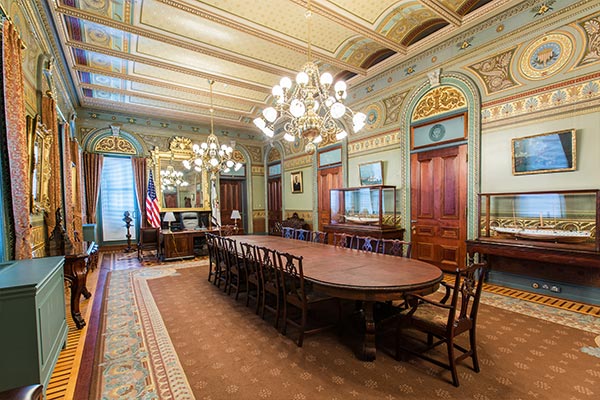 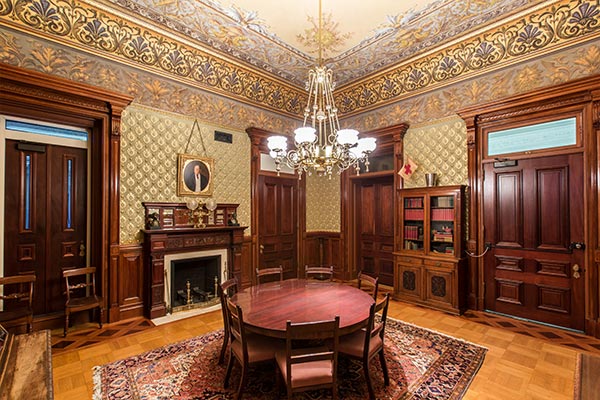 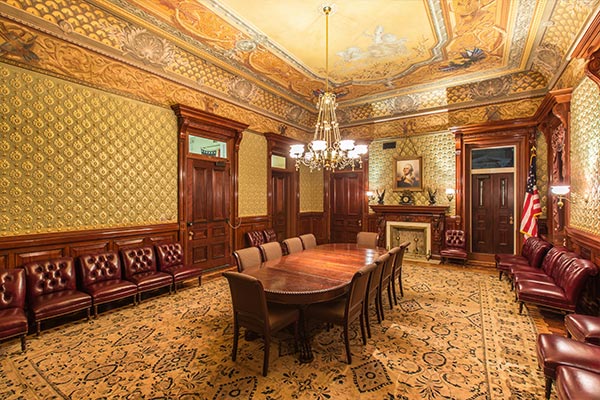 The Secretary of War Suite consists of ten rooms designed by Stephen Decatur Hatch, a prominent New York architect of the late 19th-century. Beginning in March of 1888, Secretary of War William Endicott occupied the suite. The suite would continue on to be occupied by 18 Secretaries of War until July 1939. Notable Secretaries of War included William Endicott, Elihu Root, William Howard Taft, and Henry Stimson.

History made in these rooms included the development, review, and acceptance of all plans of defense for our nation and our armed forces in times of conflict as well as in times of peace between 1888 and 1939. The War Department moved from the building between 1938-39. The Bureau of the Budget, newly established by Franklin Roosevelt's administration, immediately took possession of these rooms.

Another event of interest occurred in 1908, while in his office in what is now EEOB 230B, Secretary of War Taft received word by telephone that the Republican convention in Chicago had nominated him for the presidency. 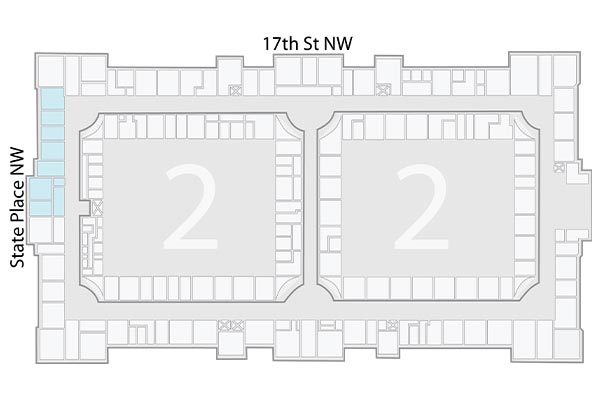 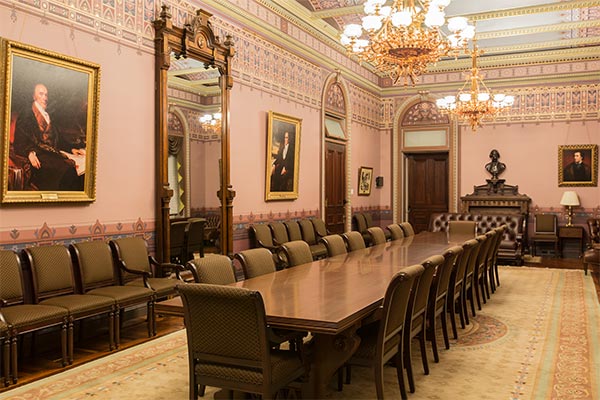 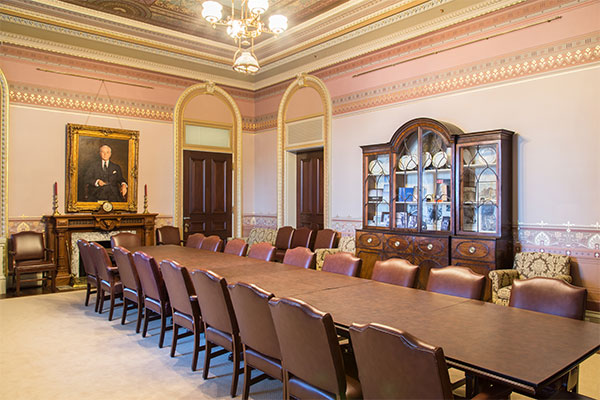 When the south wing of the State Department first opened in 1875, it had three spectacular rooms designed to be showplaces for the department. One of these was the office of the Secretary of State located at the center of the second floor with three windows opening onto the south portico and a view of the Potomac River. The other two rooms included the State Department Library (now the EOP library) and the Diplomatic Reception Room (room 212, pictured upper right).

Many important events have occurred in these rooms. In 1898, Secretary of State John Hay handed the Spanish ambassador his credentials and passport, thus signifying our declaration of war against Spain. During his term, Hay supported an American imperialist solution to the Spanish-American War, helped formulate the "Open Door" policy in China, arranged treaties to facilitate the building of the Panama Canal, and worked with President Roosevelt in settling the Russo-Japanese War.

On Sunday morning, December 7, 1941, Secretary of State Cordell Hull was in his office (pictured lower right) meeting with his aides and discussing the volatile situation in the Far East. The meeting was interrupted when intercepted messages between Japanese Foreign Minister Togo and Japanese Ambassadors to the US were delivered to Secretary Hull's office. After receiving a phone call from President Roosevelt informing him of a Japanese attack on Pearl Harbor, Secretary Hull met with the Japanese Ambassador. The next day, Congress declared war on Japan. Later, in 1942, the United Nations Declaration was drafted and signed in this room.

George Catlett Marshall was the last Secretary of State to serve in this office. Marshall oversaw the move of the Department of State staff from the EEOB to their new offices in Foggy Bottom, in the old War Department building, which was mostly complete by May 1947. 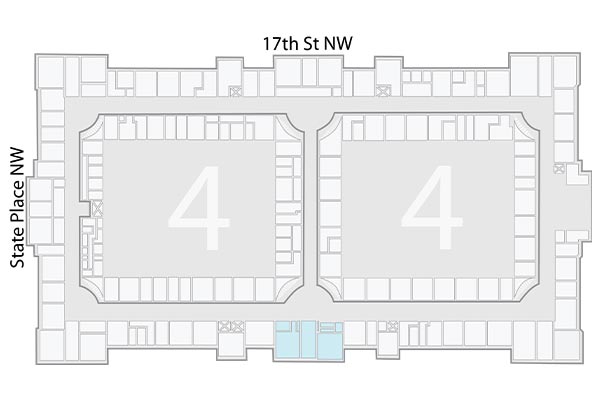 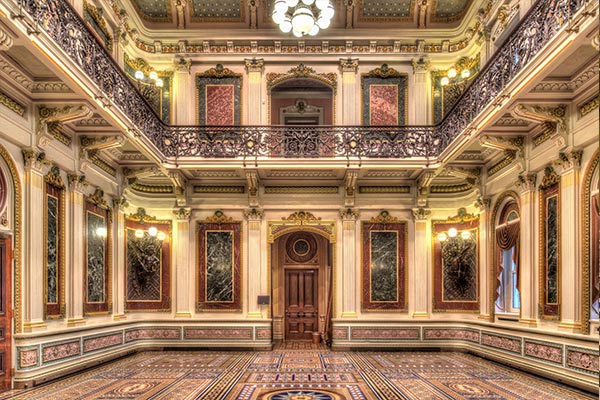 The Indian Treaty Room is located on the east wing's fourth floor and was originally the Navy Department Library. It was designed by Richard Ezdorf and was completed in 1880. The room does not resemble a library as we know it; the books were shelved in alcoves on two levels at each end adjacent to the main reading room. The Navy Department vacated the building between 1918 and 1921, with the library last to leave in 1923.

The room's designation as the "Indian Treaty Room" is one of the building's most interesting mysteries. It is not known how the room inherited its name despite considerable research. Its first mention in the press was in 1954, and many recall the days between 1923 and 1942 when the State Department used the room as storage space, and perhaps someone thought that treaties with Native American tribes were stored in the room. 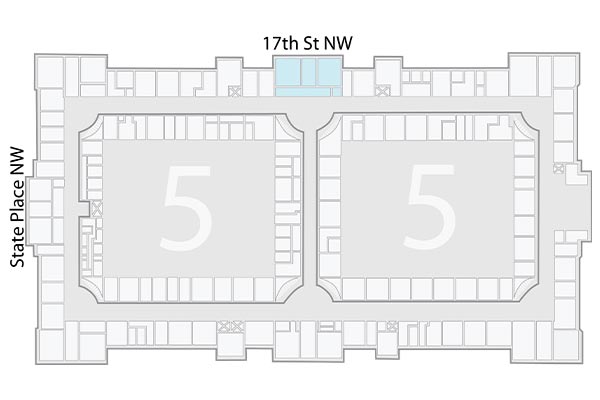 The War Library / The Law Library 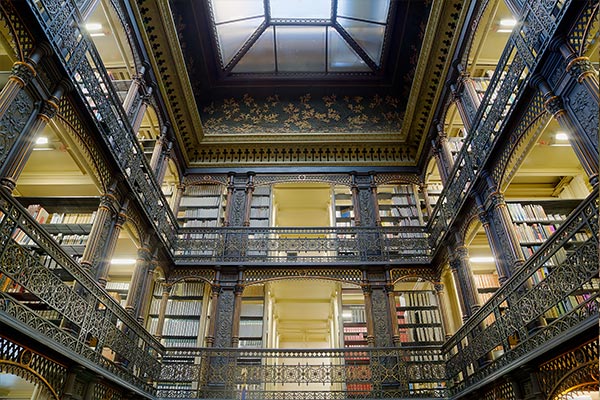 Originally designated as the War Department Library, the room was designed by Austrian-born Richard Ezdorf, a draftsman for the Supervising Architect of the Treasury, and completed in 1887. Ezdorf selected an eclectic mix of the French Renaissance, Classical, and Gothic Revival styles. Mixing elements of these styles was very popular in the late 19th-century and became characteristic of the high Victorian style.

The War Department's library collection included books, charts, maps, and photographs. This includes photographs and their negatives taken by Mathew Brady during the Civil War, which were acquired by the War Department in 1875 for $25,000 when financial difficulties forced Brady to sell them. The U.S. Signal Corps became responsible for the library in 1894, and the War Department occupied the space until 1938 when they vacated the building. 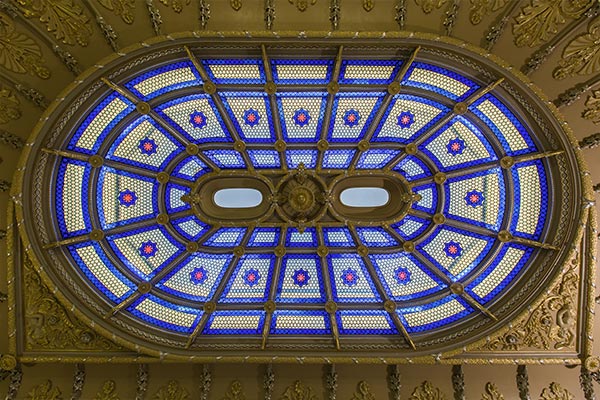 Located on the West Executive Avenue, center corridor side of the EEOB, the East Rotunda was designed for the Department of Navy by Richard Ezdorf, chief draftsman for the Supervising Architect of the Treasury; completed in 1879. 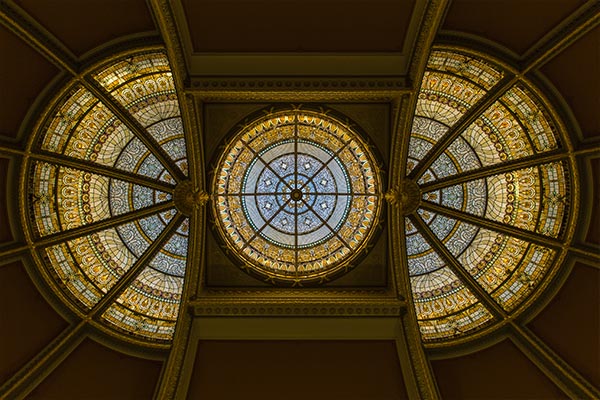 Located on the 17th Street, center corridor side of the EEOB, the West Rotunda was designed for the Department of War by Richard Ezdorf, chief draftsman for the Supervising Architect of the Treasury; completed in 1888. 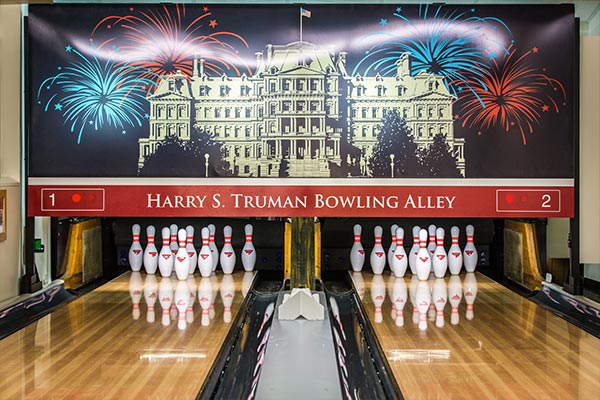 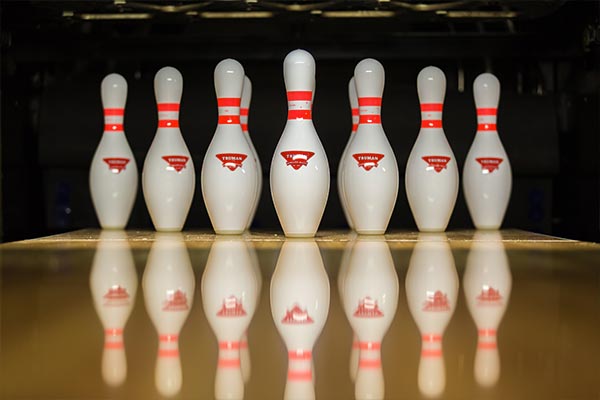 On April 19, 1947, President Harry Truman was presented with the gift of two bowling lanes in the basement of the Executive Offices (today's West Wing where the Situation Room is presently located). The lanes came with an automatic pinsetter, which had been successfully introduced the year before at the 1946 American Bowling Congress (ABC) Tournament by AMF. In 1953, President Truman gave the lanes to the employees of the White House and the bowling alley first opened. In 1955, the lanes were moved from the West Wing's basement to the EEOB's basement.

President Richard Nixon was the most avid of the presidential bowlers, spending as many as four hours at a time rolling games.

EEOB Tour styles - do not display