Joseph Robinette Biden, Jr., represented Delaware for 36 years in the U.S. Senate before becoming the 47th and current Vice President of the United States.

Joseph Robinette Biden, Jr., was born November 20, 1942, in Scranton, Pennsylvania, the first of four siblings. In 1953, the Biden family moved from Pennsylvania to Claymont, Delaware. He graduated from the University of Delaware and Syracuse Law School and served on the New Castle County Council. Then, at age 29, he became one of the youngest people ever elected to the United States Senate.

Just weeks after the election, tragedy struck the Biden family when Biden's wife, Neilia and their one-year-old daughter, Naomi, were killed and their two young sons critically injured in an auto accident. Vice President Biden was sworn in to the U.S. Senate at his sons' hospital bedside and began commuting to Washington every day by train, a practice he maintained throughout his career in the Senate.

In 1977, Vice President Biden married Jill Jacobs. Jill Biden, who holds a Ph.D. in Education, is a life-long educator and currently teaches at a community college in Northern Virginia. The Vice President’s son, Beau, was Delaware's Attorney General from 2007-2015 and a Major in the 261st Signal Brigade of the Delaware National Guard. He was deployed to Iraq in 2008-2009. Beau passed away in 2015 after battling with brain cancer with the same integrity, courage, and strength he demonstrated every day of his life. The Vice President’s other son, Hunter, is an attorney who manages a private equity firm in Washington, D.C. and is Chairman of the World Food Program USA. And his daughter Ashley is a social worker and is Executive Director of the Delaware Center for Justice. Vice President Biden has five grandchildren: Naomi, Finnegan, Roberta Mabel ("Maisy"), Natalie, and Robert Hunter.

As a Senator from Delaware for 36 years, Vice President Biden established himself as a leader in facing some of our nation's most important domestic and international challenges. As Chairman or Ranking Member of the Senate Judiciary Committee for 17 years, then-Senator Biden was widely recognized for his work on criminal justice issues, including the landmark 1994 Crime Act and the Violence Against Women Act. As Chairman or Ranking Member of the Senate Foreign Relations Committee for 12 years, then-Senator Biden played a pivotal role in shaping U.S. foreign policy. He has been at the forefront of issues and legislation related to terrorism, weapons of mass destruction, post-Cold War Europe, the Middle East, and Southwest Asia.

As the 47th Vice President of the United States, Joe Biden has continued his leadership on important issues facing the nation and has represented our country abroad traveling over 1.2 million miles to more than 50 countries. Vice President Biden has convened sessions of the President’s Cabinet, led interagency efforts, and worked with Congress in his fight to raise the living standards of middle class Americans, reduce gun violence, address violence against women, and end cancer as we know it.

Vice President Joe Biden tours the Idora Neighborhood with Assistant Secretary of Commerce for Economic Development, Jay Williams and views homes that were revitalized through funding from the neighborhood stabilization fund at the department of Housing and Urban Development, and the hardest hit fund at the Department of the Treasury, in Youngstown, Ohio, September 1, 2017. (Official White House by David Lienemann)

Eight years ago, the turmoil in the financial sector led to crippling conditions in the real economy -- the livelihood of millions of American households and businesses outside of Wall Street. Eight years later, we’re in the midst of the longest streak of job growth in history -- with more than 15 million jobs added. The Vice President played a key role in acting aggressively to arrest the crisis, restart growth and job creation, rebuild our economy on a stronger long-term foundation, and expand opportunity for all Americans. The Vice President was tasked with implementing and overseeing the $840 billion stimulus package in the American Recovery and Reinvestment Act, which has helped to rebuild our economy and lay the foundation for a sustainable economic future. He fought for America’s auto industry, saving 1.5 million jobs up and down the supply chain. The Vice President also leads the Ready to Work Initiative, the Administration’s key effort to identify opportunities to improve our nation’s workforce skills and training systems to help better prepare American workers for the jobs of a 21st century economy.

Played a Leading Role in Getting the Economy Back on Track

Fought for a Level Playing Field for American Workers 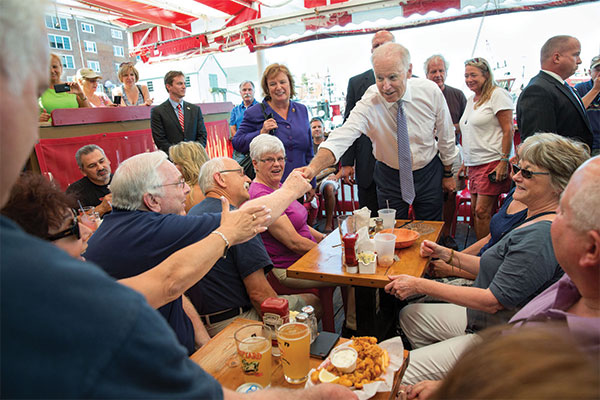 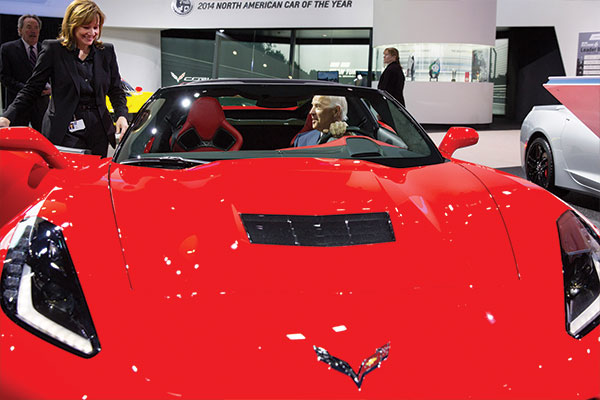 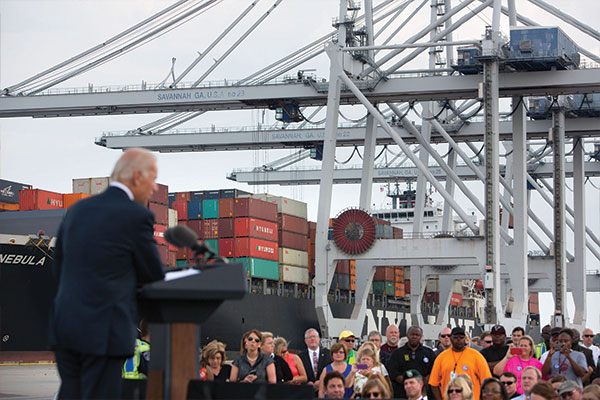 Vice President Joe Biden gives remarks at an "It's On Us" event, in the Schine Student Center on the campus of Syracuse University, in Syracuse, New York, Nov. 12, 2015. (Official White House Photo by David Lienemann)

As the author of the original Violence Against Women Act (VAWA), Vice President Biden has continued to draw upon his years in the United States Senate to address violence against women from the White House -- specifically domestic violence, sexual assault, teen dating violence, and stalking. Not long ago, violence against women was considered a private matter or “family affair” rather than recognized as a crime. Victims often suffered in silence when the court of law and court of public opinion turned a blind eye to a national secret hiding in plain sight. Too often, judges, lawyers, even friends and family blamed the victims instead of the perpetrator. As a senator, the Vice President was convinced that if the curtain was pulled back on this dirty little secret -- the vast majority of the American people would demand change. He and his staff spent thousands of hours researching the legal landscape on domestic violence and meeting with grassroots advocates operating the country’s first battered women’s shelters. They held hundreds of hours of hearings -- with testimony from advocates, health and legal professionals, and brave survivors. After several years as the country began to realize that change was necessary, VAWA was finally enacted into law in 1994. The country made great progress because of it, and the Vice President has continued to tackle the issue of violence against women during this Administration.

Combatting Violence Against Women from the White House

Prioritizing Violence Against Women in Our Foreign Policy and National Security

The Law Enforcement Response to Violence Against Women 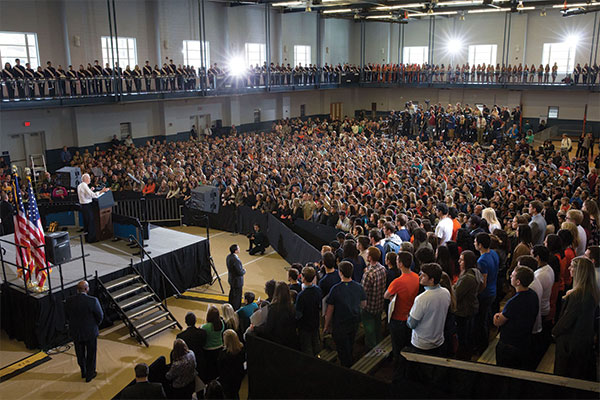 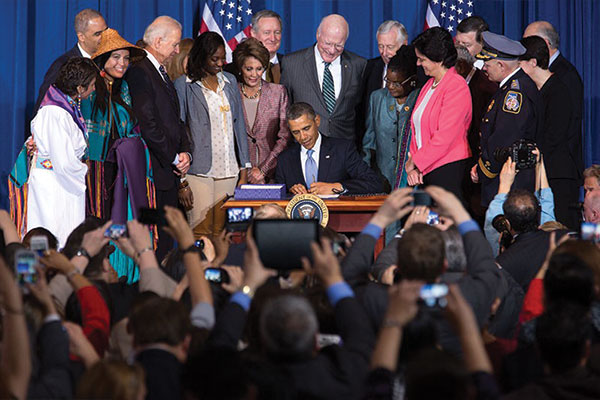 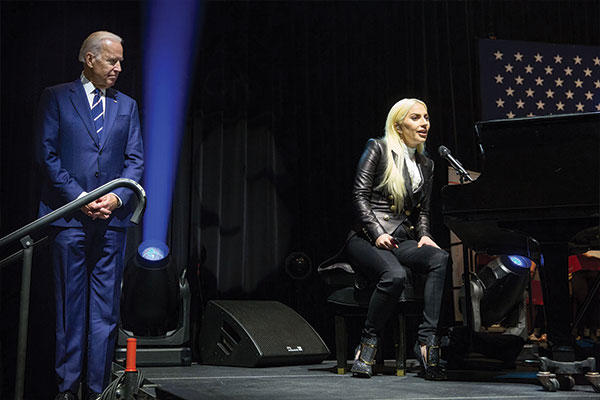 In his final State of the Union address, President Obama asked Vice President Biden to head up a new national effort to end cancer as we know it. Here’s the ultimate goal of this Cancer Moonshot: To make a decade’s worth of advances in cancer prevention, diagnosis, and treatment, in five years. And getting it done isn't just going to take the best and brightest across the medical, research, and data communities -- but millions of Americans owning a stake in it, too.

Working to End Cancer as We Know It

Reporting to the American People 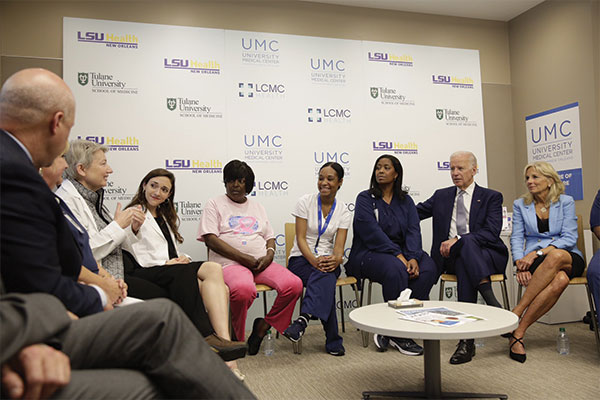 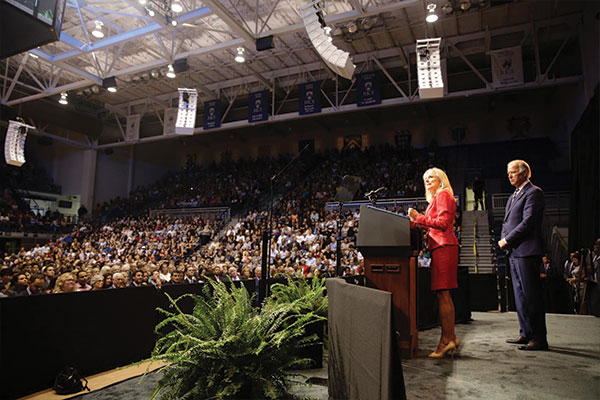 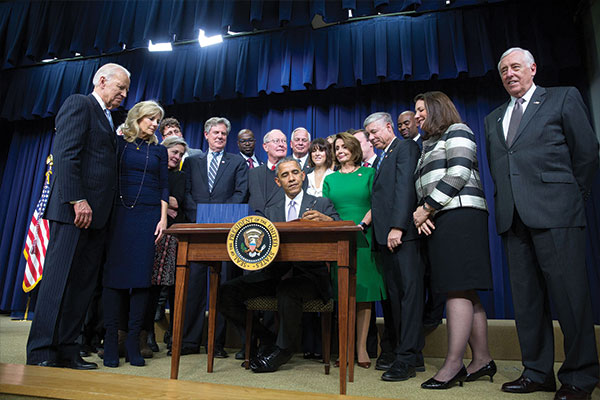 With decades of foreign policy experience in the U.S. Senate, include serving as Chairman of the Senate Foreign Relations Committee, Vice President Biden advises President Obama on international issues. The Vice President is committed to investing in the foundations of American leadership. That means smart investments in our military, but also ensuring we have a vibrant economy and a tolerant society. We not only lead with the "example of our power" but crucially through the "power of our example." The Vice President believes all politics is personal -- you must really know who you’re sitting across the table from and what his or her political reality is. We must work with international and local partners to share the burden and invest key actors in long-term success. This is key to good policy foreign policy. Demonstrating this belief, the Vice President has represented our country in every region of the world, traveling to more than 50 countries during this Administration.

Encouraging a Hemisphere that is Middle Class, Prosperous, and Secure

Vice President Biden is the Administration’s point person for diplomacy within the Western Hemisphere. He has worked to realize his vision of a Hemisphere that is “middle class, secure, and democratic, from Canada to Chile and everywhere in between.” In this capacity, the Vice President has led the Administration’s regional efforts to address economic, social, governance, and citizen security challenges.

Standing up for a Europe Whole, Free, and at Peace

The Vice President has been a leading architect of the U.S. strategic vision of a Europe whole, free and at peace. During his time in the Senate, the Vice President led the effort to enlarge NATO to include the former Warsaw Pact countries of Eastern and Central Europe after the collapse of the Iron Curtain. The Vice President’s speech at the Munich Security Conference in February 2015 laid out a vision for how to revitalize NATO, strengthen democratic institutions in Europe, prioritize investments to bolster energy security, and grow trade and investment ties across the Atlantic. The Vice President has been leading the Administration’s effort to support a sovereign, democratic Ukraine, visiting the country three times in 2014.

Supporting the Rebalance to Asia

The Vice President has also played an active role in supporting the Administration’s rebalance to the Asia-Pacific. He has developed deep relationships with the region’s leaders, demonstrating U.S. commitment to high-level, face-to-face diplomacy.

Engaging Iraq and Its Neighbors

In the Middle East, the Vice President has been deeply involved in shaping U.S. policy toward Iraq, visiting the country several times. He has met with the leaders from around the Middle East and has championed Israel’s security.

Encouraging Economic Integration and Security in the Eastern Mediterranean 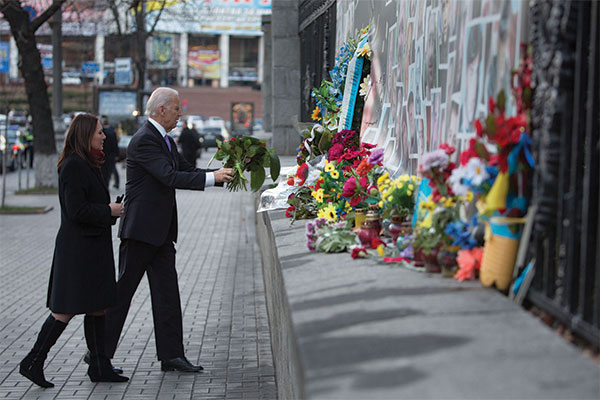 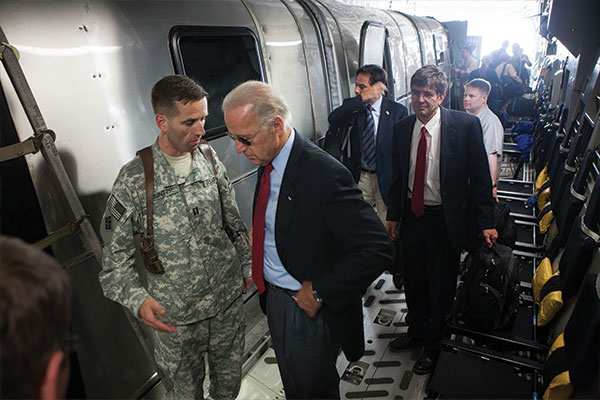 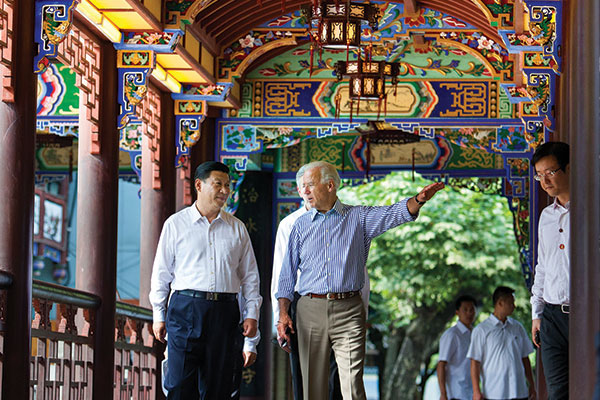 VP - styles - do not display