Meet the Women of the Administration: Claudia Gordon

August 30, 2010 at 5:47 PM ET by Maude Baggetto
Twitter Facebook Email
Summary:
Claudia Gordon is the third featured guest in the Council on Women and Girls: Meet the Women of the Administration series. Get to know her by reading this post.

The Council on Women and Girls is delighted to feature Claudia Gordon from the Department of Labor in our Meet the Women of the Administration series. Claudia is a Special Assistant to the Director of the Office of Federal Contract Compliance Programs (OFCCP). At OFCCP Claudia works on ensuring that contractors doing business with the Federal government do not discriminate and take affirmative action. To get to know about Claudia, her career, and her inspirations read the following Q and A with her. 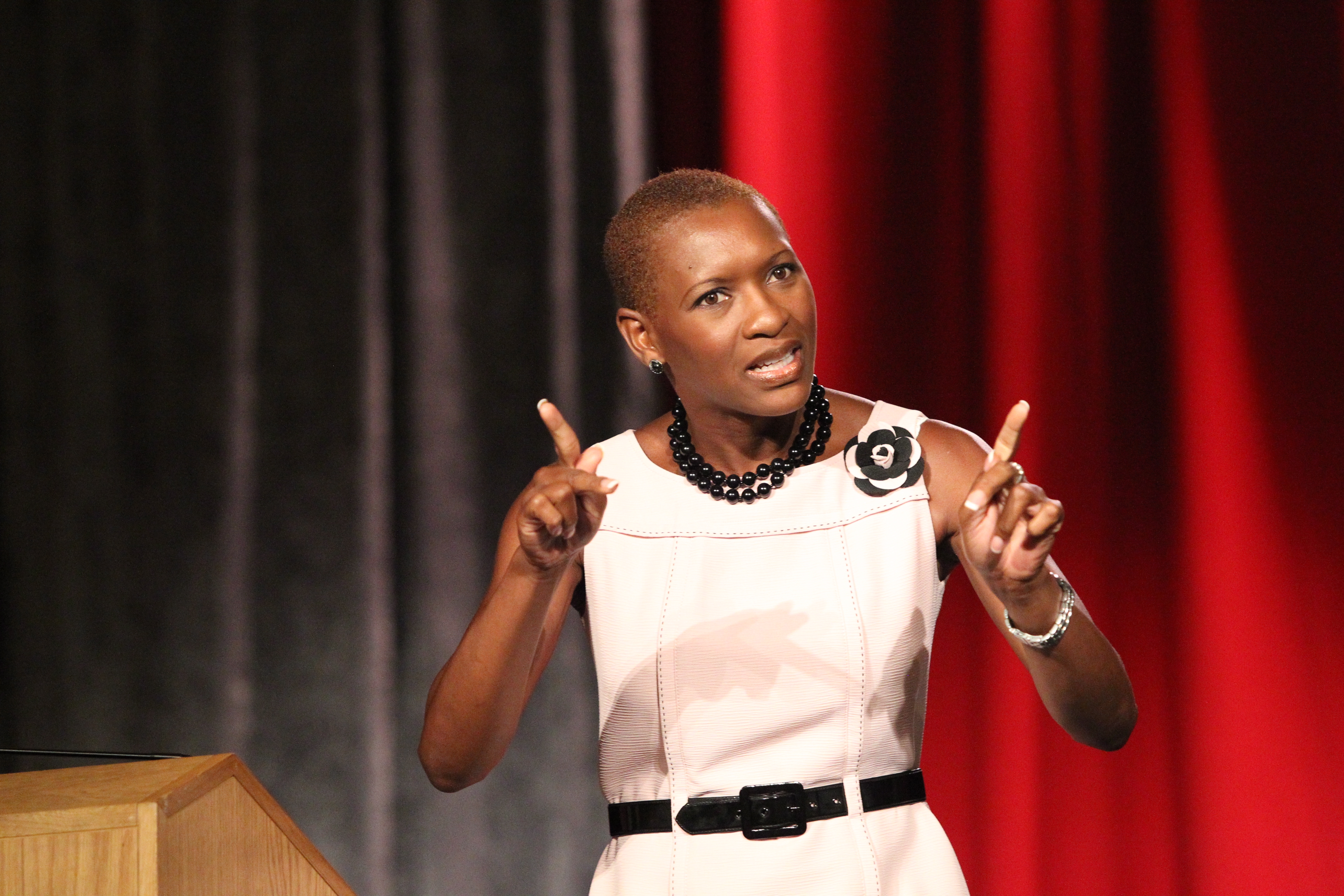 Claudia Gordon delivering the opening keynote in American Sign Language at the 50th Biennial Conference of the National Association of the Deaf in Philadelphia, PA. July 6, 2010.


Growing up, who were your role models?

My mother was my most influential role model. She was a woman of profound faith and perseverance up until the very day she lost her six year battle with ovarian cancer in 2000. Growing up, I witnessed her hard work and sacrifices as she struggled to raise my two siblings and me, all on her own, deep in the rural countryside of Jamaica, W.I. A domestic servant with only an eighth grade education, she literally scrubbed her way to America one garment at a time.  When she immigrated to America -- the South Bronx --  she kept right on working to ensure that within a few years she would be reunited with her three children, whom she had left in the care of her eldest sister, my aunt Mildred Taylor.  My mother taught me that we all control our own destiny and should never become victims of our circumstances. She taught me about the unbelievable power of faith and love.

My aunt Mildred was also a very important role model, along with my grandmother Viola Parsons. In truth, I was raised by a community of women. They were always in the background pitching in whenever my Mom was in need. Despite all the hardships, they created a positive environment in which all of us children could be properly nourished with a sense of responsibility, dignity and pride. My aunt Mildred is a teacher, and as such she instilled in us the importance of a good education. At the age of 74, she is still teaching today.

There are scores of other individuals I could name because behind every successful person are plenty of people: role models, mentors, colleagues, friends and family members. No one gets here by him or herself so I am grateful to a lot of people.

How did you become interested in working for the Federal government?

My interest in working for the Federal government was sparked while working as a Skadden Fellow and staff attorney at the National Association of the Deaf (NAD) Law and Advocacy Center from 2000-2002. The NAD operates on a shoe-string budget and the law center staff fluctuates from two to four full time attorneys working tirelessly to keep pace with incoming discrimination claims and requests for technical assistance from among the 36 million deaf and hard of hearing individuals in America. It was there that I confronted the truth that passing legislation is one thing but actual implementation with enforcement is another. I felt that a job with the Federal government would more effectively allow me to affect the actual enforcement of laws such as the Americans with Disabilities Act of 1990 and the Rehabilitation Act of 1973, thereby alleviating the blatant discrimination that people with disabilities continue to face.

When I suddenly lost my ability to hear at the age of eight, I was taken out of school and kept at home to perform chores. Friends slowly disappeared and what was usually a cheerful hello was replaced by an awkward smile, curious stares and even outright ridicule. There were also those long road trips on the bumpy Jamaican roads to distant towns where healers would perform rituals in attempts to cure me.  I thought I was the only deaf person in the world. I did not realize until years later that a woman who everyone in my town knew as “dummy,” and who children my age would incessantly harass with stone throwing, was deaf. Looking back, I wish I knew her real name. What I do know is that the life of this woman – ostracized as “dummy” – almost became my own but for my mother’s triumph in successfully bringing me to America by the time I was eleven years old.

By my junior year in high school, I made it known to all that I would go to law school and become an attorney. Many shrugged off my grand intention as wishful thinking. Some cited my deafness as an obstacle rendering it impractical if not impossible to pursue a law degree. Thanks to the values that were instilled in me during my formative years, I understood then that those voices of doubt neither dictated my worth nor my capacity. I want to contribute to a better society where there is more understanding and acceptance of people with disabilities and where the same opportunities are provided for all.

I am motivated by knowing that although progress is being made towards inclusion and access, there is still a great deal more work to be done. Also, mentoring youth and young adults with disabilities keeps me motivated. I have an innate desire to give back. It is uplifting when you are able to empower another and help someone discover a sense of self-worth and confidence in his or her abilities.

What has been your favorite moment since you’ve been working for the Department of Labor?

My work at Labor is with an agency called the Office of Federal Contract Compliance Programs. Yes, it’s a cumbersome name that’s all-too-typical of “Federal speak.” And though it’s not as well known as its sister agencies like the Equal Employment Opportunity Commission and the Civil Rights Division at the Department of Justice, OFCCP has powerful investigative and regulatory authorities for protecting workers, promoting diversity and enforcing the law.The agency was born out of the landmark civil rights laws of the 1960s and over its 45-year history has expanded in authority to include protections for women, veterans and people with disabilities.

It’s hard to pick a single moment that stands out in the eight months I’ve been here.Every day I get to be a part of a team of nearly 750 dedicated public servants – working in every part of the country – who are responsible for holding those who do business with the Federal government – contractors and subcontractors – to the very reasonable standard that they cannot discriminate on the basis of race, color, religion, gender, national origin, disability or status as a protected veteran. Secretary Hilda Solis has laid out a pretty straightforward mission for our department: Good Jobs for Everyone. In pursuing that mission, OFCCP is leading the way to ensure that the reach for good jobs is truly within the grasp of everyone.

On a personal level, I’ve had so many wonderful moments at the Department that it’s difficult to pick just one. It’s always a joy when I get to work closely with my boss, OFCCP Director Patricia A. Shiu. She is an intelligent and talented attorney who comes from the advocacy world. Pat spent 26 years as a public interest attorney fighting on behalf of the victims of employment discrimination. Now, she has come “on the inside” to create change from within government. It’s that reality of our jobs – knowing that we have a window of opportunity to effect such sweeping and systematic change – that makes me proud of the work we do. When my service to the President is over and I have to face my family, my friends and my communities – as an African American, as a woman and as a deaf person – what I hope to look back on is not a single moment, but rather a series of opportunities where I used my seat at the table and my voice in the decision-making process to improve the lives of those who seek to redeem the promise of America, the promise that brought my mother here all those years ago.

OFCCP recently published an Advance Notice of Proposed Rulemaking (ANPRM) seeking input from the public on ways to strengthen regulations for implementing Section 503 of the Rehabilitation Act, which requires Federal contractors to take affirmative action to employ and to advance in employment qualified individuals with disabilities. This is long overdue. Given the fact that nearly one in four American workers is employed by a company that receives Federal funds for contracted work, stronger Section 503 regulations, backed by real enforcement, will ensure that more people with disabilities have equal employment opportunity in the labor force. Typically, policy changes like this are submitted for public comment after they’ve been formulated. However, at OFCCP we are going to the public – particularly to leaders and grassroots advocates in the disability community – before we even craft the policy changes so that they can weigh in on our efforts and shape the laws that will directly impact their lives. I think it’s an exciting way for government to function and is in keeping with the high standards of inclusion, openness and transparency that the President has set for all of us.

To be honest, I don’t.  But I am blessed with supportive family and friends who know that the long hours I spend at work are spent doing something important. And I know they are proud, patient and ready to welcome me home when this tour of duty, in service of our country, is done.

Meet other fascinating administration women by checking out our post on Under Secretary of Commerce for Economic Affairs Rebecca Blank and our post on Assistant Secretary of Labor for Disability Employment Policy Kathleen Martinez.