For the Win: Hope and Soap

October 28, 2011 at 5:49 PM ET by Ronnie Cho
Twitter Facebook Email
Summary:
Maren Johnson, a junior at Watertown High School in Watertown, SD, describes how she spreads the word on the importance of washing your hands.

Maren Johnson, 16, is a junior at Watertown High School in Watertown, S.D. She is the Global Soap Project’s student ambassador and a member of the 2011 PARADE All-America High School Service Team, an award recognizing outstanding young service leaders presented by PARADE Magazine in partnership with generationOn, the global youth service enterprise of Points of Light.

Nearly 50 fifth and sixth grade students at Immaculate Conception school in my hometown of Watertown, S.D., were shocked recently when they saw simulated germs on their classmates’ hands light up under a special ultra-violet light as part of a Global Handwashing Day activity. Global Handwashing Day, celebrated this year on October 15, is an annual day to raise awareness about the benefits of handwashing with soap and support a global culture of handwashing.

Studies show that hand washing with soap is the most effective way to reduce disease that causes more than 3.5 million children to die before they reach five. While it is extremely important to raise awareness and create better hand washing habits, I have engaged more than 500 people in solving another critical problem: millions of people simply cannot afford soap, or do not have access to it.

That’s why a little over a year ago I recruited six hotels in Watertown to begin collecting their used bars of soap so that I could help recycle them through the Global Soap Project in Atlanta, Ga. My network has grown to more than 160 hotels in four states and Canada and I’ve collected more than 6,000 pounds of used soap. Recently, about 100 hotels with more than 7,000 hotel rooms in the Black Hills of South Dakota indicated they intend to join our effort.

The collected soap is then delivered to Atlanta where it is reprocessed into new bars and shipped by aid agencies to refugee camps and medically underserved areas, primarily in Haiti and Africa. In fact, this year on Global Handwashing Day, the same day the fifth and sixth graders learned about hand washing, approximately 25 Watertown High School freshmen and sophomores helped me package approximately 5,000 pounds of the used soap for shipment. 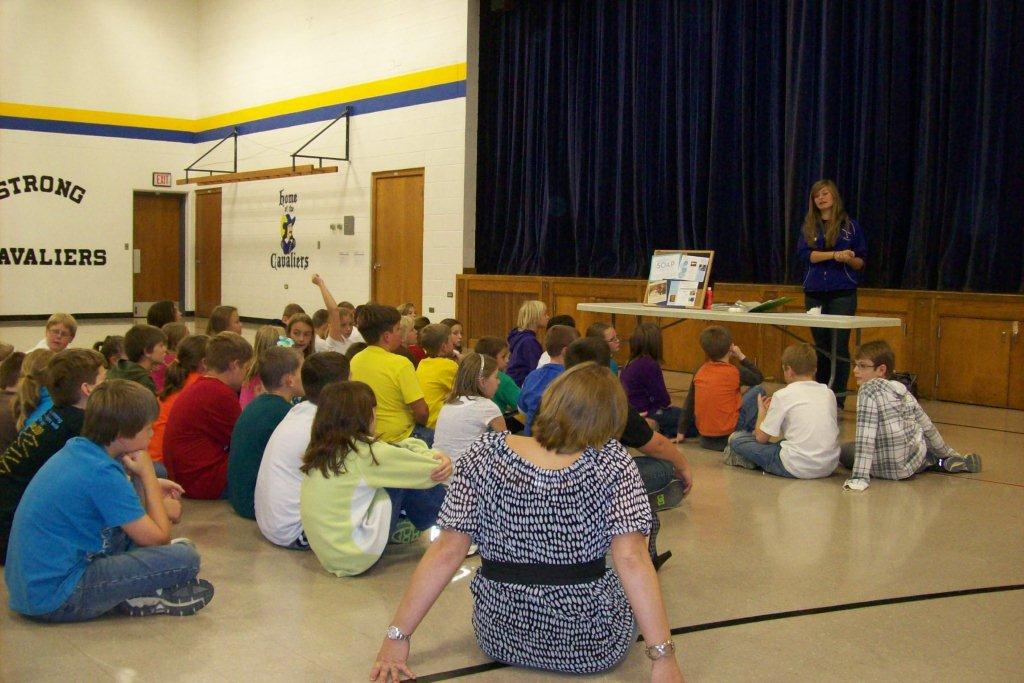 Fifth and sixth grade students at the Immaculate Conception School listen to Maren Johnson tell them about the Global Soap Project. Watertown, SD. (Photo from Points of Light Institute)

After finishing our work, we talked about how important community service is to our world and how one person can make a difference and if you have an idea, act on it.

That’s what Derreck Kayango did in 2009 when he started the Global Soap Project. He was recently recognized as one of the Top 10 CNN Heroes of 2011. Derreck made his way out of a refugee camp in Uganda to the United States. As Derreck knows firsthand, a person who has no money, or may make only one dollar a day, is not likely to spend 10 cents on a bar of soap.

Meanwhile, we are throwing away more than 2.6 million bars of soap daily from hotels throughout the United States. My collection effort started in collaboration with the Minnesota Chapter of the Hospitality Sales and Marketing Association International (HSMAI) and has gathered more than 22,000 pounds of soap. We are working to expand the soap collection effort across the United States because recycling our waste can mean the difference between life and death.

According to Global Handwashing Day promoters, “Handwashing with soap is among the most effective and inexpensive ways to prevent diarrheal diseases and pneumonia, which together are responsible for the majority of child deaths.” And they say, “turning handwashing with soap before eating and after using the toilet into an ingrained habit could save more lives than any single vaccine or medical intervention, cutting deaths from diarrhea by almost half and deaths from acute respiratory infections by one-quarter.”

My work with the Global Soap Project is to get students involved as volunteers to collect soap and raise money to help defray the expenses. A combination of awareness through Global Handwashing Day’s efforts and providing soap to vulnerable populations from the Global Soap Project can save lives and give people across the world an opportunity for better and longer life, but it takes a community to get involved.