November 16, 2011 at 4:13 PM ET by Lynn Rosenthal
Twitter Facebook Email
Summary:
Lynn Rosenthal shares her experiences from this past October, Domestic Violence Awareness Month. She traveled took around the country to visit communities, host roundtable meetings with local domestic violence advocates to hear about their successes in the field, as well as the challenges they are facing every day. 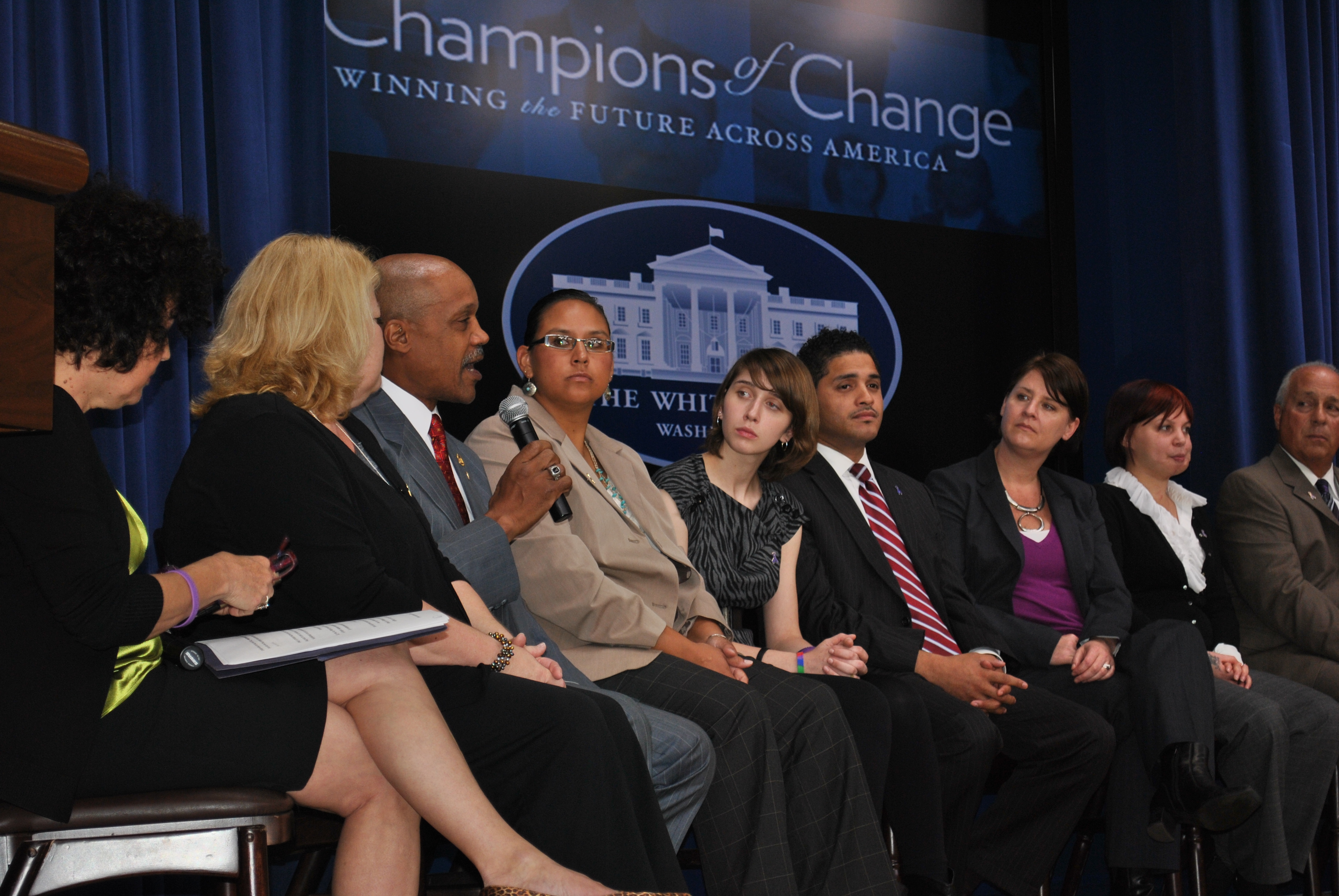 In honor of Domestic Violence Awareness Month, Lynn Rosenthal, left, moderates a 'Champions of Change' event to honor 14 individuals and organizations, from across the country, that are focused on ending domestic violence in their communities. (Photo by Riana Lynn) October 20, 2011.

This October, Domestic Violence Awareness Month took me around the country to participate in a variety of listening sessions, conferences, and local events. In many of the communities I visited, I hosted roundtable meetings with local domestic violence advocates to hear about their successes in the field as well as the challenges they are facing every day.

In early October, I traveled to Radnor, Pennsylvania to give an address at the Cabrini College Domestic Violence Symposium. The Symposium was part of Cabrini College’s broader initiatives on domestic violence education. While passing through Philadelphia, I had the chance to meet with local advocates who serve the Philadelphia community and bring their concerns back to the White House.

Later that week, I returned to Washington D.C.  to participate in a panel at the Center for American Progress (CAP) on domestic violence safety and services in communities of color, discuss violence against women efforts at the World Bank, and participate in an Interagency Meeting and Listening Session for Tribal Leaders at the White House.

On October 13, I set off for West Virginia to give the keynote address at the West Virginia Coalition Against Domestic Violence’s 30th Anniversary Celebration. The Coalition has worked tirelessly over the years to develop programs to serve the needs of those in rural communities. I also held a roundtable with local executive directors of programs serving victims of violence and addressed a group of local domestic violence advocates trained at the Coalition’s annual conference.  A few days later, I flew to Las Cruces, New Mexico to speak at a Domestic Violence Awareness Month vigil for a local organization called La Casa, Inc. Earlier in the day, La Casa gathered together local advocates to talk with me about the needs women are facing in New Mexico.

On October 20, Valerie Jarrett and Director Susan Carbon of the Office on Violence Against Women at the Department of Justice joined me in honoring 14 incredible individuals for their dedication to ending domestic and sexual violence These White House Champions of Change have done extraordinary work in their local communities to bring about change in this field. You can view the inspirational profiles and stories of our Champions, and also watch the event in case you missed the livestream here.

Throughout the month of October, The Departments of Education, Health and Human Services, and Housing and Urban Development collaborated to hold ten town hall events throughout the country on the topic of “Engaging Men and Boys in Ending Violence Against Women.” These town halls provided a unique opportunity for federal and community partners to participate in important discussions about how to include men in ending violence against women. You can learn more about the event that took place in your area here. The Vice President also announced the winners of the Apps Against Abuse Challenge, on a conference call with college presidents. You can see exciting new apps to help keep students safe.

Thank you for taking time to learn about the work on violence against women at the White House during Domestic Violence Awareness Month. Like you, we remain committed to engaging communities, and keeping up the fight to end violence against women not only during October but throughout every month and day of the year.

Lynn Rosenthal is the White House Advisor on Violence Against Women.