February 10, 2012 at 9:02 AM ET by Doug Rand
Twitter Facebook Email
Summary:
Hayley Hoverter is an award-winning technology innovator, an entrepreneur, a CEO – and she’s also a 16-year-old high school student. This week she met President Obama at the White House Science Fair, where she presented her product, “Sweet (dis)SOLVE.” 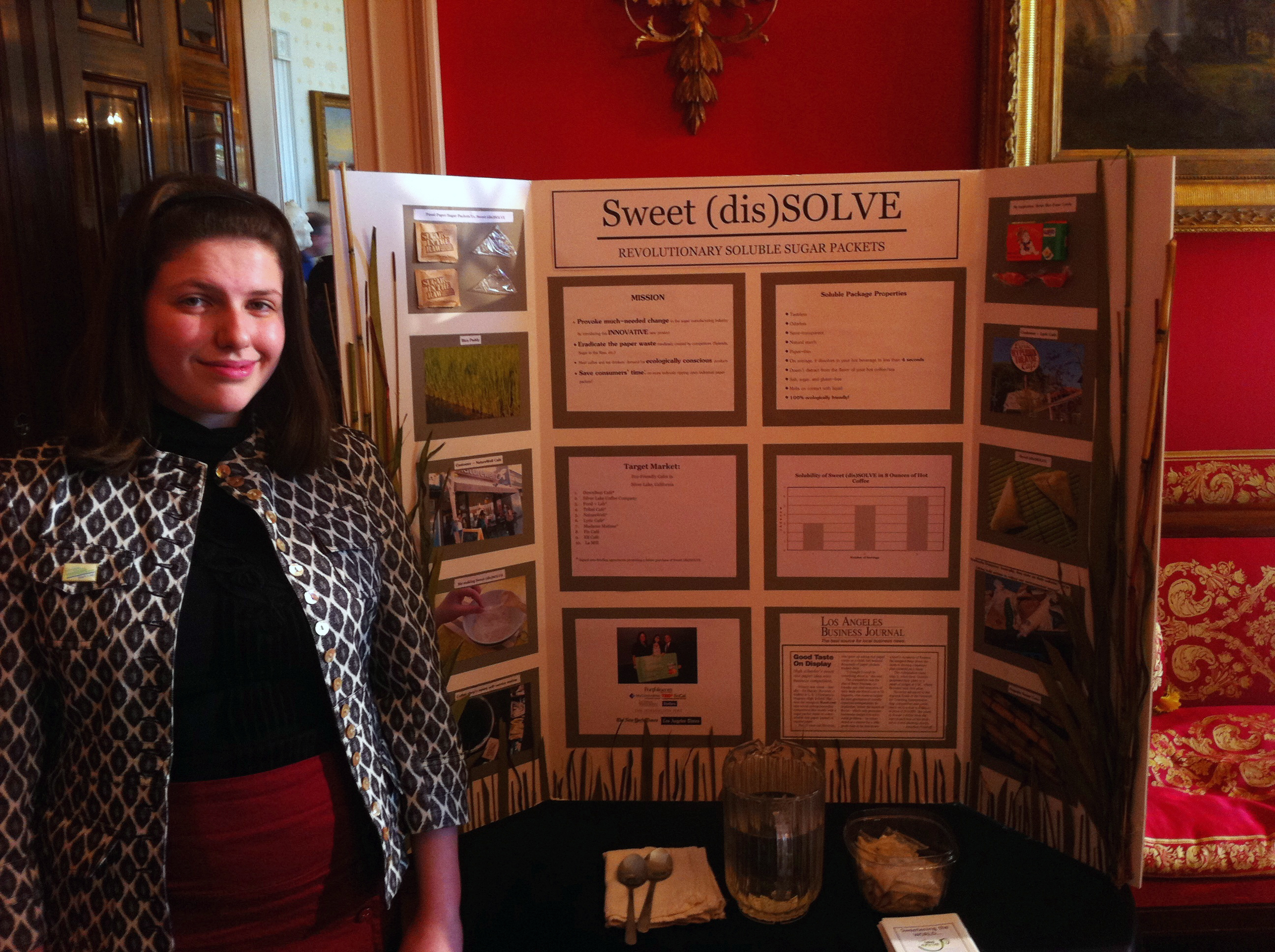 Hayley Hoverter is an award-winning technology innovator, an entrepreneur, a CEO – and she’s also a 16-year-old high school student.  This week she met President Obama at the White House Science Fair, where she presented her product, “Sweet (dis)SOLVE.”  As the President explained:

“What impresses me so much is not just how smart you are, but it’s the fact that you recognize you’ve got a responsibility to use your talents in service of something bigger than yourselves.  Some of you, that means developing new products that will change the way we live.  Hayley Hoverter invented a new type of sugar packet that dissolves in hot water.  It’s flavorless, it’s colorless, and potentially could save up to 2 million pounds of trash each year -- and that’s just at Starbucks.”

Last year Hayley won the National Youth Entrepreneurship Challenge, run by the Network for Teaching Entrepreneurship (NFTE).  She received a $10,000 award from Mastercard to turn her idea into a business, and she’s well on her way.  “Tell me when I can buy stock," the President joked after hearing her pitch.

Nearly 40% of American teenagers are interested in starting a business, and now is a better time than ever to be a young entrepreneur.  For starters, it’s easier to pursue an entrepreneurial path now that the President has signed legislation allowing young people to stay insured on their parents’ health plan and capping student loan payments at 15% of income (soon dropping to 10% as part of the President’s “We Can’t Wait” series of executive actions).

Private sector trends have also made it easier than ever for young entrepreneurs to surround themselves with the right resources.  Since Y Combinator launched in 2005, mentor-driven startup accelerators have sprouted up across the country.  The cost of starting and growing a company has plummeted with the rise of web-based tools, and the Startup America Partnership has mobilized over $1 billion in business services to bring that cost down even further for 100,000 startups.

Meanwhile, as part of the White House Startup America Initiative – which just celebrated its first birthday last week – the Obama Administration has funded a National University Clean Energy Business Challenge and a National Center for Engineering Pathways to Innovation, inspiring more young Americans to start new companies and solve tough problems.  And top Administration officials – including the First Lady-- continue to meet with young entrepreneurs at the White House and across the country.