February 28, 2012 at 3:34 PM ET by Megan Slack
Twitter Facebook Email
Summary:
President Obama speaks at the United Auto Workers Annual Conference about the growth of the American auto industry, which is creating jobs and making profits after nearly collapsing before the President took office. 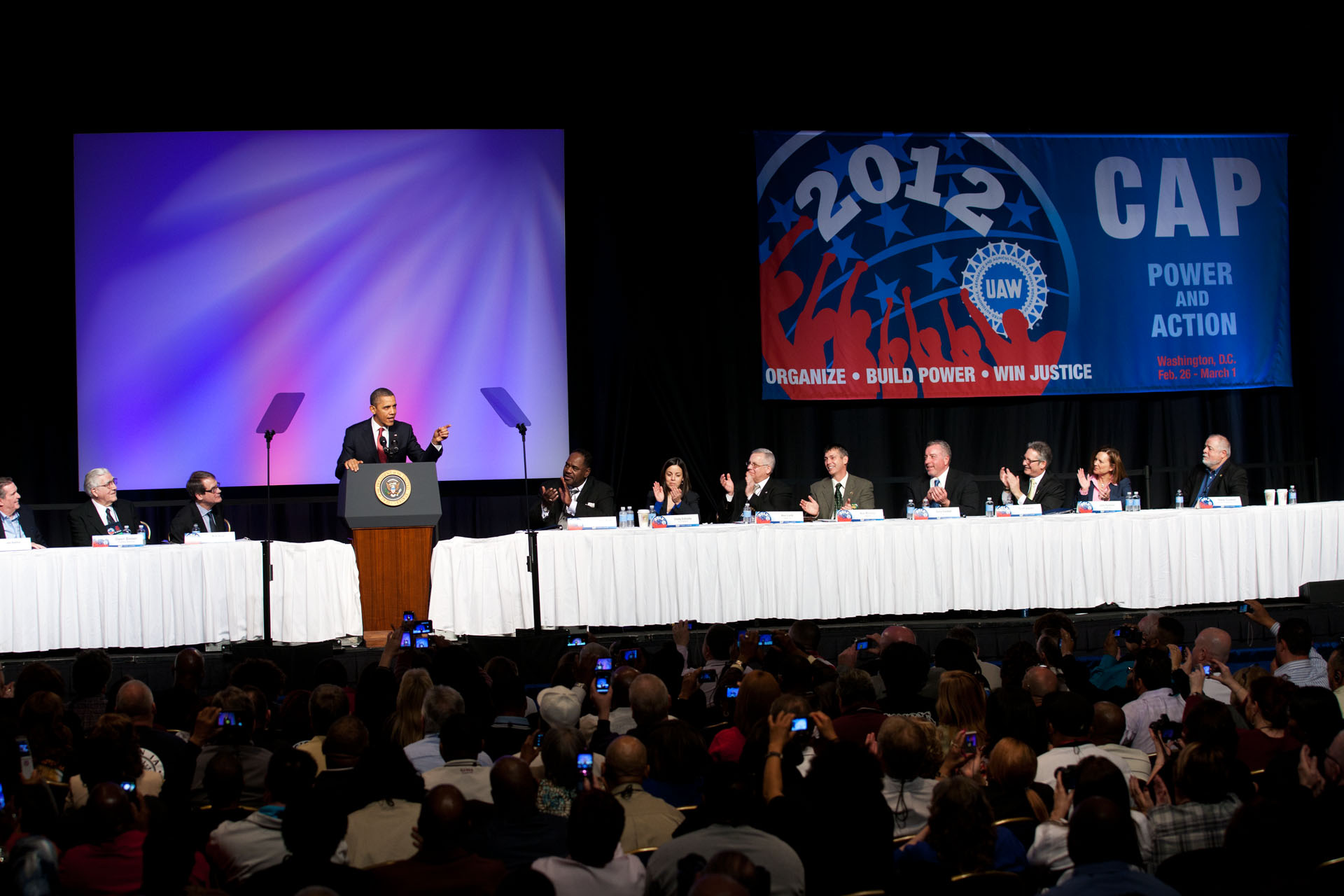 Today, President Obama spoke at the United Auto Workers Annual Conference to discuss the success of the American auto industry.

After nearly collapsing three years ago, our nation's big three automakers are turning profits and opening new factories. The industry has added more than 200,000 jobs. And those workers aren't just building cars again--they are building better, more fuel efficient automobiles that help Americans save money at the pump every time they fill up. The cars they are building to meet new fuel efficiency standards will average 55 miles to the gallon by 2025, cutting our oil consumption by 2 million barrels a day.

When the President took office, our nation’s three largest automakers were on the brink of failure. The economy was in complete free fall and private  investors weren’t willing to take a chance on the auto industry. Doing nothing, as some proposed, would have cost more than a million Americans their jobs, and threatened the livelihood of many more in the communities that depend on the industr. As President Obama explained today:

Think about what that choice would have meant for this country, if we had turned our backs on you, if America had thrown in the towel, if GM and Chrysler had gone under. The suppliers, the distributors that get their business from these companies, they would have died off.  Then even Ford could have gone down as well. Production shut down. Factories shuttered. Once-proud companies chopped up and sold off for scraps. And all of you, the men and women who built these companies with your own hands, would have been hung out to dry.

President Obama wasn’t willing to let that happen. He stepped in and offered the support automakers needed in return for some restructuring on their end:

[W]e were not going to take a knee and do nothing. We were not going to give up on your jobs and your families and your communities.  So in exchange for help, we demanded responsibility. We said to the auto industry, you're going to have to truly change, not just pretend like you're changing.  And thanks to outstanding leadership…we were able to get labor and management to settle their differences.

Since then, the President has taken even more steps to help our automakers and other manufacturers. Thanks to the bipartisan trade agreement he signed into law last year, there will be new cars in the streets of South Korea imported from Detroit and from Toledo and from Chicago. And a new Trade Enforcement Unit, introduced in the State of the Union and launched today, will help counter unfair trading practices around the world to level the playing field for American workers and manufacturers. As the President explained:

...America always wins when the playing field is level. And because everyone came together and worked together, the most high-tech, fuel-efficient, good-looking cars in the world are once again designed and engineered and forged and built -- not in Europe, not in Asia -- right here in the United States of America.