By the Numbers: 2.5 Million

March 21, 2012 at 9:00 AM ET by Megan Slack
Twitter Facebook Email
Summary:
An additional 2.5 million young adults have health insurance because of the provision in the Affordable Care Act that allows them to stay on their parents’ plan until they turn 26. 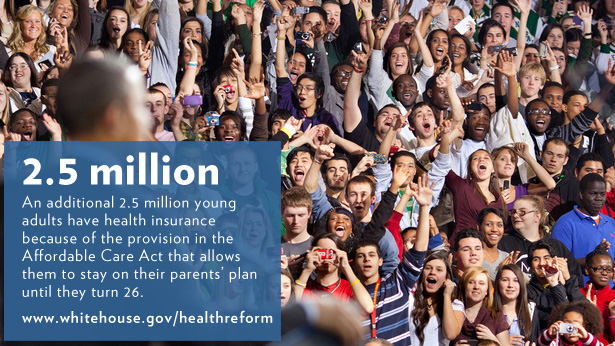 Under the Affordable Care Act, parents can now add or keep their children on their health insurance plans until they turn 26 years old. Since that part of President Obama’s health reform law went into effect in September 2010, more than 2.5 million young adults have gained coverage.

Before the passage of health reform, young adults were typically dropped from their parents’ coverage when they turned 18 or graduated from college, and often faced barriers to accessing and maintaining affordable health insurance. Nearly 76 percent of uninsured young adults avoided getting the care they needed because they couldn’t afford it.

In addition to helping them gain or keep insurance coverage through their parents’ plans, the Affordable Care Act is improving health care for many young adults in other ways. For example, insurance companies must now cover preventive services, like vaccinations and cancer screenings, at no additional cost. Insurance companies are banned from imposing a limit on the amount of care they’ll cover over a person’s life time, and are now required to spend at least 80 percent of premium dollars on care—not overhead.

Young adults that have been unable to purchase or obtain insurance because of a pre-existing condition can now get the coverage then they need through the new Pre-Existing Condition Insurance Plan.

When the Affordable Care Act is fully implemented in 2014, insurance companies will be banned from limiting the amount of care they’ll cover in a year and no longer be able to deny coverage to anyone based on a pre-existing condition. And everyone, including young adults, will have new options for purchasing individual coverage that’s not tied to employment or student status.