From the Roosevelt Room of the White House Monday, President Obama connected directly with Americans via Twitter, where he answered questions about extending middle class tax cuts (watch the video here).

Good to see lots of folks on twitter speaking out on extending middle class tax cuts. I'll answer some Qs on that at 2ET. Ask w/ #My2k –bo

During the live Twitter Q&A, the President addressed the need for a balanced approach to reduce the deficit, the ongoing fiscal cliff negotiations, and even weighed in with his predictions for Chicago sports teams from the White House Twitter account. During the conversation, the hashtag #My2k was used more than 31,000 times and trended nationally on Twitter throughout the chat.

A week ago today, President Obama called on all Americans to speak out on the need to extend middle class tax cuts. And they have: So far, more than 100,000 people have shared the impact a $2,000 tax hike would have on them and their families through WhiteHouse.gov, and another 250,000 Americans spoke out on Twitter using the hashtag #My2k. 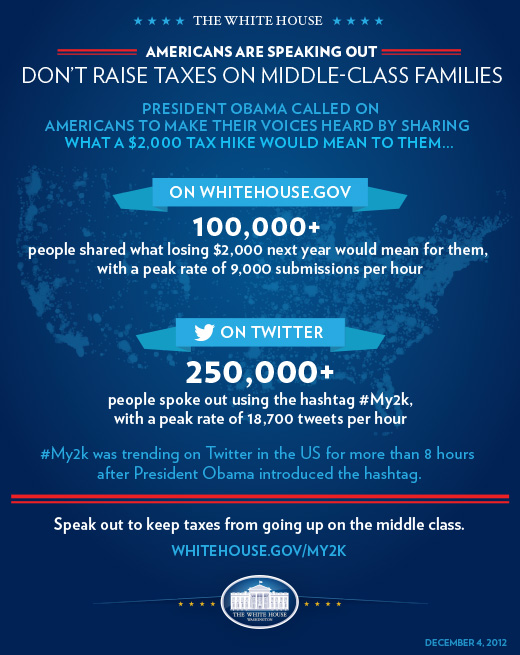 So, what does $2,000 mean to Americans? It means being able to afford groceries, books for school, mortgage payments, prescription drugs, extracurricular activities for kids, and a whole lot more, to each of the hundreds of thousands of people who have spoken out on this issue. Read some of the stories Americans have shared so far, and then tell us what $2,000 means to you.