President Obama Congratulates NCAA Champion UConn Huskies: "One Of The Great Sports Dynasties Of Our

Today in the East Room, President Obama honored the 2013 NCAA Division I women's basketball champion UConn Huskies as a part of his commitment to celebrate sports teams that inspire their communities on and off the court.

The trip was a familiar one for the Huskies, who won the tournament and visits to the White House in 2009 and 2010. President Obama joked that eight-time NCAA champion UConn Coach Geno Auriemma "spent more time than some Presidents in the White House."

While the Huskies have a new trophy to tout, President Obama called attention to their positive impact on those around them. 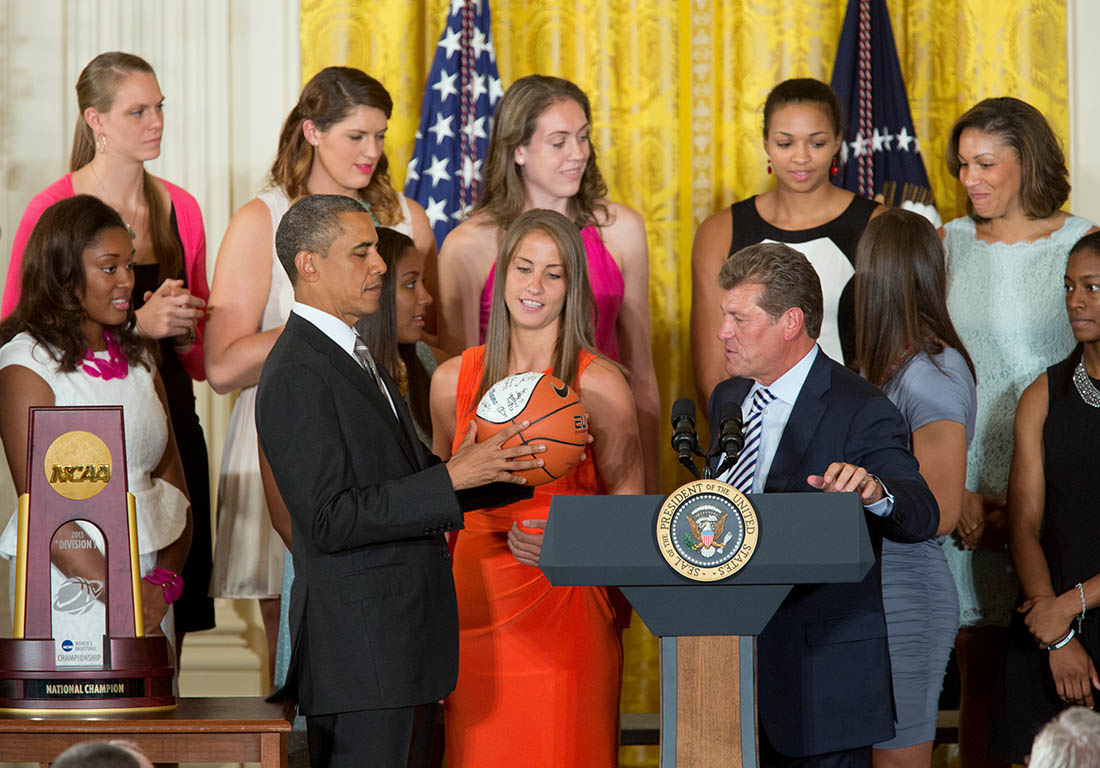 President Barack Obama looks at the basketball presented to him during the ceremony for the NCAA Champion University of Connecticut Huskies to honor the team and their 2013 NCAA Women’s Basketball Championship, in the East Room of the White House, July 31, 2013. (Official White House Photo by Amanda Lucidon)

"As any UConn fan will tell you, folks just love this team -- and it goes beyond what they do on the court. One fan came to the victory parade to take pictures for his daughter and he was quoted as saying, 'We come to as many games as we can because they are truly amazing. They're great role models.' They’re great role models.

And that’s true in the classroom. I want to congratulate all three seniors on earning not just another title, but earning their college degrees as well. It is true overseas, where a lot of these folks played on Team USA, whether it’s Geno and the six UConn Huskies who helped bring home the Gold at the London Olympics, or Breanna leading our under-19 team to a championship just a few days ago.

When they’re not hitting the books or representing their country, they find time to get involved in the community. Last year, players visited the Hole in the Wall Gang Camp for children with serious illnesses; joined the Walk for Autism. Geno just held his 11th annual charity golf tournament. And while you may be rivals with Baylor on the court, you joined together off the court to raise over $30,000 for the Kay Yow Cancer Fund.

And so that’s why we’re so happy to have you all back to the White House. These are just some incredible athletes. They’ve made their mark as one of the great sports dynasties of our time, but they’re also just really outstanding young women."

Thinking of his own family, the President also recognized that the Huskies represent more than themselves: "As the father of two young, beautiful, athletic and tall daughters," he said, "it just always puts a smile on my face whenever I see such class acts represent their school and their country so well."

Last week, President Obama congratulated the Louisville Cardinals, who won the men's tournament this year. President Obama didn't expect to see either team as NCAA champions when he filled out his men's or women's bracket, announcing that "I have to confess that my bracketology needs some work."