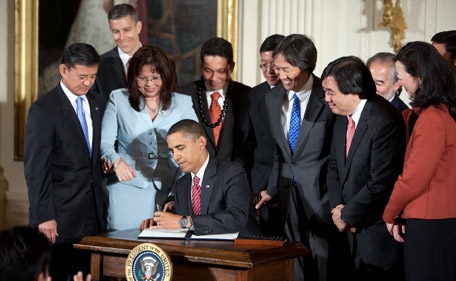 This year, we reached an important milestone.

2013 marks the four-year anniversary of the White House Initiative on Asian Americans and Pacific Islanders under President Obama. Since President Obama signed the Executive Order reestablishing the Initiative and the President’s Advisory Commission on AAPIs in October 2009, we have worked to open the doors of government to the AAPI community.

We’ve partnered with agencies throughout the government and community organizations across the country to improve the quality of life for our community. As we mark our four-year anniversary, we are proud of the work we’ve accomplished for AAPI communities, including:

We have been inspired by the community’s energy, expertise, and efforts. And together, we’ve accomplished a great deal. As we celebrate this milestone, take a look at our special video message to hear more about some of our key accomplishments.

This work is only the beginning. We know there is so much more to be done. We will continue to build upon our efforts by opening doors to better education, better health, better jobs, and a better America where Asian Americans and Pacific Islanders can rest assured that federal government programs and services will be accessible to them.

Read more highlights of our work over the past four years.