February 21, 2014 at 6:45 PM ET by Jonathan Friedman
Twitter Facebook Email
Summary:
This week, President Obama bet on Team USA, and visited Mexico. The First Lady stopped by the Tonight Show, and the White House reaffirmed its commitment to net neutrality. Check out what you missed in this week's wrap up.

This week, President Obama bet on Team USA, and visited Mexico. The First Lady stopped by the Tonight Show, and the White House reaffirmed its commitment to net neutrality. Check out what you missed in this week's wrap up.

The President Bets On Team USA

While in Mexico for the North American Leaders' Summit, the President spoke about our strong relationship with our neighboring countries. But every relationship has room for a little friendly competition, so President Obama and Canadian Prime Minister Stephen Harper decided to make things interesting...

.@pmharper and I bet on the women's and men's US-Canada hockey games. Winner gets a case of beer for each game. #GoTeamUSA! -bo

While both U.S. teams played valiantly, the Canadian teams came out on top and earned Prime Minister Harper a couple cases of White House beer.

FLOTUS and Fallon, Together Again

Last night, the First Lady dropped by "The Tonight Show Starring Jimmy Fallon" to congratulate Jimmy on his new gig and celebrate the fourth anniversary of her Let's Move! initiative.

As the First Lady says in this clip from her interview, "show us how you're moving." Use #LetsMove on Facebook, Twitter, Instagram, and Vine to show her how you move and "if we get enough of a response, we'll have a little surprise... the President, and maybe the Vice President, will show us how they move."

President Obama spoke about the importance of strengthening our "already incredible" relationship with our fellow North American nations and how that relationship improves job creation and security.

In response to the We The People petition to Restore Net Neutrality By Directing the FCC to Classify Internet Providers as "Common Carriers", The White House reaffirmed it's committment to net neutrality and reminded us that President Obama has embraced the principle of net neutrality since his days as a U.S. Senator.

"An open Internet is an engine for freedom around the world." —White House @WeThePeople response on #NetNeutrality: http://t.co/z2JpgZXQJp

Read the full response to the petition to learn more about the importance of net neutrality.

The President traveled to a Safeway Distribution Center in Maryland to announce some big news about big trucks. 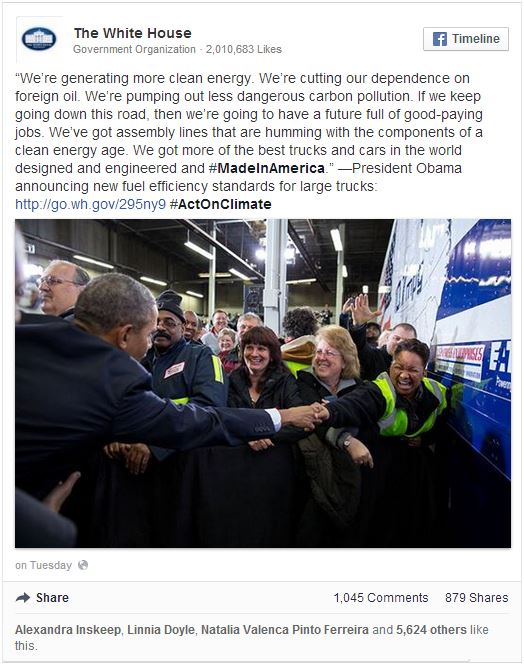 President Obama directed the Environmental Protection Agency and the Department of Transportation to develop new fuel efficiency standards for medium- and heavy-duty trucks that will lead to lower emissions and fuel savings for drivers.