February 28, 2014 at 7:36 PM ET by David Hudson
Twitter Facebook Email
Summary:
The White House, in collaboration with the American Film Institute, hosts young filmmakers from across the country at the first-ever White House Student Film Festival. 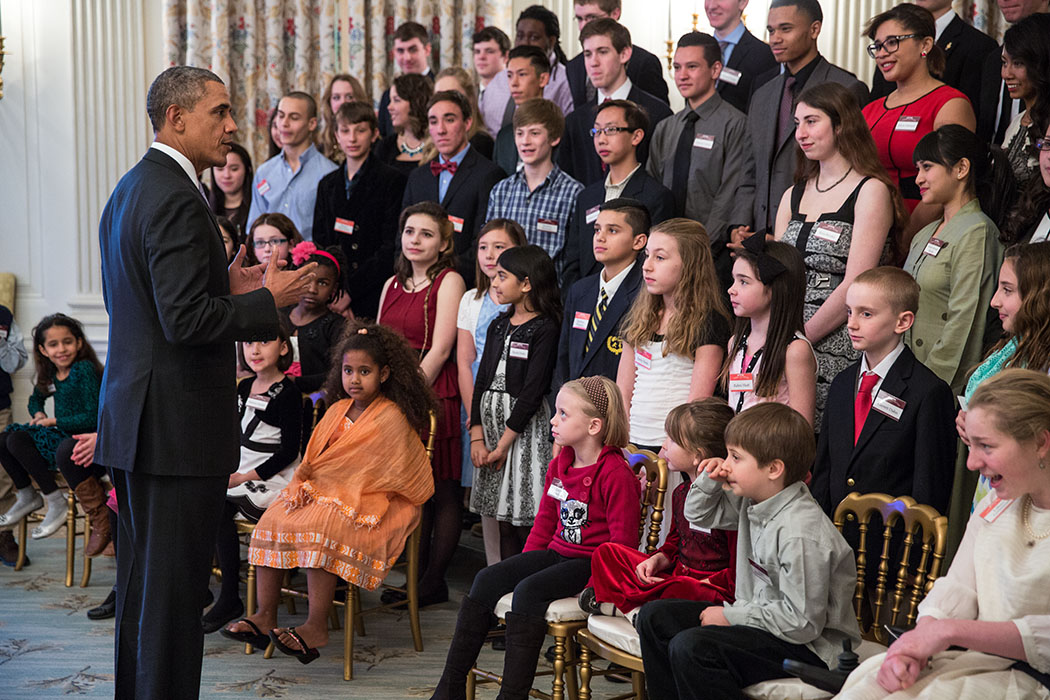 President Barack Obama speaks with students in the State Dining Room prior to the White House Student Film Festival in the East Room of the White House, Feb. 28, 2014. (Official White House Photo by Pete Souza)

Back in November, we asked K-12 students across the country to create short films on the role that technology plays in their classrooms. We asked them to tell us why technology is so important, and how it will change the educational experience for kids in the future.

And they responded with nearly 3,000 films.

Today, in collaboration with the American Film Institute, we hosted more than a dozen of the young filmmakers at the first-ever White House Student Film Festival, where we presented our 16 official selections. Special guests included Kal Penn, Bill Nye, and Neil deGrasse Tyson, along with Conan O’Brien who addressed the students by video.

To kick things off, President Obama addressed the attendees and told the young filmmakers how great their movies were:

[I]n my official capacity as President, let me just say these movies are awesome. Like all great movies, yours do something special -- they tell a story. They help us understand, in this case, the amazing things that are going on in classrooms and how technology is empowering our students and broadening their imaginations and challenging them to dream bigger and reach further.

The President also talked briefly about his ConnectED initiative, which aims to connect 99 percent of America's students to next-generation, high-speed Internet over the next five years. He announced $400 million in new commitments from Adobe and Prezi to make free software available to teachers and students, helping introduce creative learning materials to America's classrooms. Coupled with the $750 million in commitments that the President announced earlier this month, private-sector leaders have pledged – in February alone – to invest more than $1 billion in America's students.

If you missed the livestream of the event, don’t worry – the film festival's official selections, as well as the videos that received honorable mentions, are below for your viewing pleasure: