The President Gives an Update on the Situation in Iraq

August 9, 2014 at 12:51 PM ET by David Hudson
Twitter Facebook Email
Summary:
From the South Lawn of the White House, President Obama makes a statement on the situation in Iraq, detailing the progress of current American operations in the country.

This morning, from the South Lawn of the White House, President Obama made a statement on the situation in Iraq, detailing the progress of current American operations in the country:

Good morning.  Over the past two days, American pilots and crews have served with courage and skill in the skies over Iraq.

First, American forces have conducted targeted airstrikes against terrorist forces outside the city of Erbil to prevent them from advancing on the city and to protect our American diplomats and military personnel.  So far, these strikes have successfully destroyed arms and equipment that ISIL terrorists could have used against Erbil.  Meanwhile, Kurdish forces on the ground continue to defend the city, and the United States and the Iraqi government have stepped up our military assistance to Kurdish forces as they wage their fight.

Second, our humanitarian effort continues to help the men, women and children stranded on Mount Sinjar.  American forces have so far conducted two successful airdrops -- delivering thousands of meals and gallons of water to these desperate men, women and children.  And American aircraft are positioned to strike ISIL terrorists around the mountain to help forces in Iraq break the siege and rescue those who are trapped there.

The President added, however, that the United States is continuing to pursue our broader strategy in Iraq, even while dealing with these immediate situations:

We will protect our American citizens in Iraq, whether they’re diplomats, civilians or military. If these terrorists threaten our facilities or our personnel, we will take action to protect our people.

We will continue to provide military assistance and advice to the Iraqi government and Kurdish forces as they battle these terrorists, so that the terrorists cannot establish a permanent safe haven.

We will continue to work with the international community to deal with the growing humanitarian crisis in Iraq.  Even as our attention is focused on preventing an act of genocide and helping the men and women and children on the mountain, countless Iraqis have been driven or fled from their homes, including many Christians.

This morning, I spoke with Prime Minister Cameron of the United Kingdom and President Hollande of France.  I’m pleased that both leaders expressed their strong support for our actions and have agreed to join us in providing humanitarian assistance to Iraqi civilians who are suffering so much.  Once again, America is proud to act alongside our closest friends and allies.

More broadly, the United Nations in Iraq is working urgently to help respond to the needs of those Iraqis fleeing from areas under threat.  The U.N. Security Council has called on the international community to do everything it can to provide food, water and shelter.  And in my calls with allies and partners around the world, I’ll continue to urge them to join us in this humanitarian effort.

"Finally," the President concluded, "we continue to call on Iraqis to come together and form the inclusive government that Iraq needs right now."

Just as we are focused on the situation in the north affecting Kurds and Iraqi minorities, Sunnis and Shia in different parts of Iraq have suffered mightily at the hands of ISIL.  Once an inclusive government is in place, I’m confident it will be easier to mobilize all Iraqis against ISIL, and to mobilize greater support from our friends and allies.  Ultimately, only Iraqis can ensure the security and stability of Iraq.  The United States can’t do it for them, but we can and will be partners in that effort.

One final thing -- as we go forward, we’ll continue to consult with Congress and coordinate closely with our allies and partners.  And as Americans, we will continue to show gratitude to our men and women in uniform who are conducting our operations there.  When called, they were ready -- as they always are.  When given their mission, they’ve performed with distinction -- as they always do.  And when we see them serving with such honor and compassion, defending our fellow citizens and saving the lives of people they’ve never met, it makes us proud to be Americans -- as we always will be.

Read the full transcript of the President's statement, along with the questions he answered from the press. 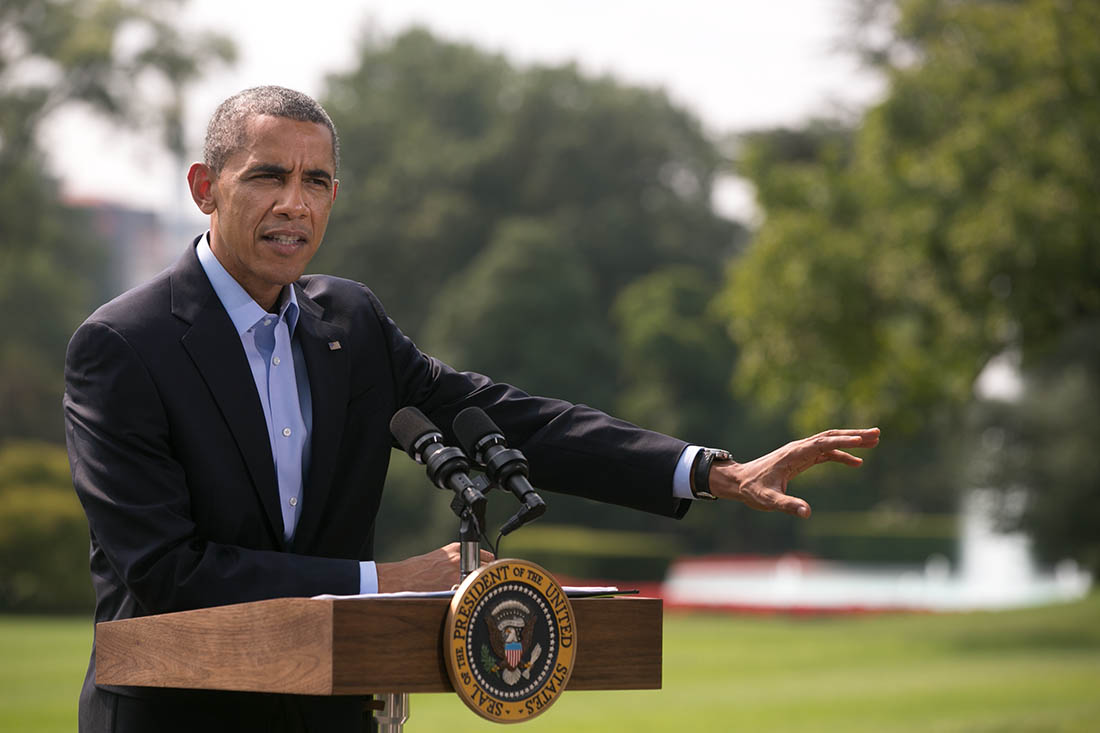 President Barack Obama delivers a statement to the press on the South Lawn of the White House before he departs for Martha's Vineyard, Mass., Aug. 9, 2014. (Official White House Photo by Amanda Lucidon)