Weekly Wrap Up: 10 Million Jobs, 50 Years of Conservation, and a Trip to Estonia and the U.K.

September 5, 2014 at 7:28 PM ET by David Hudson
Twitter Facebook Email
Summary:
This week, the economy added 10 million jobs; the country celebrated 50 years of environmental conservation; and the President spoke about the enduring strength of democracy to the people of Estonia.

This week, the economy added 10 million jobs; the country celebrated 50 years of environmental conservation; and the President spoke about the enduring strength of democracy to the people of Estonia.

Check out what else you may have missed in this week’s wrap up.

And while there’s a lot more work to do, President Obama has made good on his promise of a “year of action.” Here are some of the ways we’ve made our economy stronger than ever:

In his remarks, President Obama spoke about how we’ve made America stronger with record sales of American goods abroad, booming clean energy production, and much more. And while we’ve made substantial progress, the President reiterated that there’s still more work to do -- especially when it comes to raising the minimum wage for hardworking Americans:

I want an economy where your hard work pays off with higher wages, and higher incomes, and fairer pay for women, and workplace flexibility for parents, and affordable health insurance, and decent retirement benefits. I’m not asking for the moon, I just want a good deal for American workers.

"If you work full-time in America, you shouldn’t be living in poverty." —Obama: http://t.co/pz7syFtbOH #RaiseTheWage pic.twitter.com/0CEyN6wo7Z

On Wednesday, the President became the first sitting U.S. president to address the people of Estonia. He reflected on the historic struggle the Baltic people have faced in their fight for democracy, and reiterated the United States’ commitment to the people of Ukraine in their ongoing fight for independence:

We want Ukrainians to be independent and strong and able to make their own choices free from fear and intimidation, because the more countries are free and strong, and free from intimidation, the more secure our own liberties are.

Watch the President’s speech on the winning strength of democracy:

A Statement on the Ebola Outbreak

In a video released on Tuesday, the President spoke directly to the people of West Africa about the Ebola outbreak affecting the countries of Liberia, Sierra Leone, Guinea, and Nigeria. He emphasized that stopping the outbreak won’t be easy, but the United States, along with our global partners, are working to help stop the spread of this disease.

This week marked the 50th anniversary of two landmark conservation bills: the Land and Water Conservation Fund Act and the Wilderness Act. Passed by President Lyndon Johnson in 1965, these two critical laws have helped usher in a new era of conservationism.

Protecting America’s great outdoors is not only good for our air and water, but it also boosts our local economies. Did you know that Americans spend $646 billion on outdoor recreation each year? Cool, right? 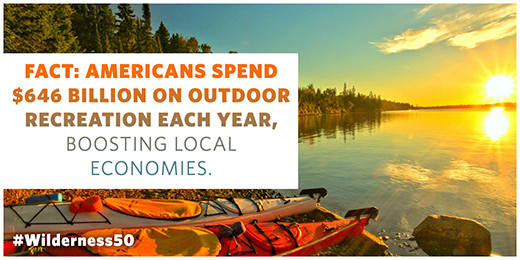 And while we’ve made great strides, our work isn’t done yet. That’s why President Obama has urged Congress to permanently fund the Land and Water Conservation Fund and act on a number of proposals to help protect and conserve America’s great outdoors.