The President Meets with Senior Staff to Discuss the U.S. Response to Ebola

The Centers for Disease Control and Prevention (CDC) confirmed that two health care workers at Texas Presbyterian Hospital -- who both provided care for an Ebola patient who traveled from Liberia to Dallas, Texas -- have also tested positive for Ebola, and have since been isolated.

In today's White House press briefing, Press Secretary Josh Earnest that these two transmissions of Ebola do not amount to an outbreak, but made clear that the President is working to ensure that "all of the needed resources of the federal government are being deployed to deal with this specific situation."

Learn more about the active steps CDC is taking related to hospital preparedness for Ebola treatment.

This afternoon, President Obama met with his senior health, homeland security, and national security advisors to review the United States' response to the Ebola epidemic.

The participants discussed the Ebola case in Dallas, Texas; the United States' broader preparedness plans; and both domestic and international efforts to contain and end the epidemic. Participants also discussed options to enhance airport screening in the United States and the need to tackle Ebola at its source in West Africa, where the United States has launched a civilian-led whole-of-government effort that leverages the unique capabilities of the U.S. military to help bring the epidemic under control.

In remarks following the meeting, the President reiterated that our country's public health infrastructure is well-prepared to prevent an Ebola outbreak in the United States.

"It is important for Americans to know the facts," the President said. "Because of the measures that we’ve put in place, as well as our world-class health system and the nature of the Ebola virus itself -- which is difficult to transmit -- the chance of an Ebola outbreak in the United States is extremely low."

"Because of the measures that we’ve put in place, as well as our world-class health system and the nature of the Ebola virus itself – which is difficult to transmit – the chance of an Ebola outbreak in the United States is extremely low."

As President Obama said today, there are now procedures in place to rapidly evaluate any person who may be showing symptoms of Ebola. He also noted that while thousands of travelers have come to the U.S. from West Africa in recent months, only one case of Ebola has been diagnosed in our country.

At the same time, he made it clear that Ebola is still a top national security priority, and "not just a matter of charity":

As I’ve said from the start of this outbreak, I consider this a top national security priority.  This is not just a matter of charity -- although obviously the humanitarian toll in countries that are affected in West Africa is extraordinarily significant.  This is an issue about our safety.  It is also an issue with respect to the political stability and the economic stability in this region.

And so it is very important for us to make sure that we are treating this the same way that we would treat any other significant national security threat.  And that’s why we’ve got an all-hands-on-deck approach -- from DOD to public health to our development assistance, our science teams -- everybody is putting in time and effort to make sure that we are addressing this as aggressively as possible.

"We’ve got an all-hands-on-deck approach – from DOD to public health to our development assistance, our science teams – everybody is putting in time and effort to make sure that we are addressing this as aggressively as possible."

"The bottom line," the President said, "is that we're doing everything we can to make sure, number one, that the American people are safe; I’m confident that we’re going to be able to do that. But we’re also going to need to make sure that we stop this epidemic at its source. And we’re profoundly grateful to all our personnel -- our medical personnel, our development personnel, our military personnel who are serving in this effort." 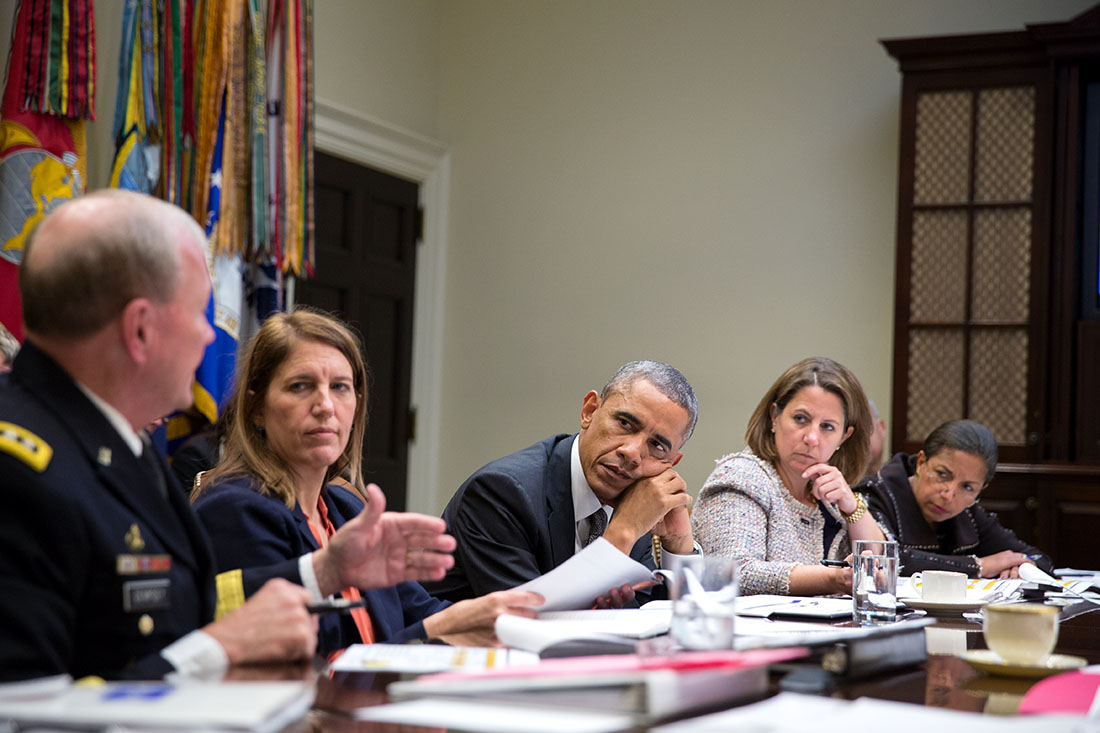 President Barack Obama meets with members of his national security team and senior staff to receive an update on the Ebola outbreak in West Africa and the Administration’s response efforts, in the Roosevelt Room of the White House, Oct. 6, 2014. Pictured with the President, Gen. Martin Dempsey, Chairman of the Joint Chiefs of Staff; Health and Human Services Secretary Sylvia Mathews Burwell; Lisa Monaco, Assistant to the President for Homeland Security and Counterterrorism; and National Security Advisor Susan E. Rice. Also present were Dr. Tom Frieden, Director of the U.S. Centers for Disease Control and Prevention (CDC); Rajiv "Raj" Shah, Administrator of the U.S. Agency for International Development (USAID); and Samantha Power, U.S. Permanent Representative to the United Nations. (Official White House Photo by Pete Souza)

In a fact sheet released later this afternoon, the White House detailed U.S. public health officials' efforts to prepare and fortify our national health infrastructure in order to quickly and effectively respond to domestic Ebola cases, to ensure that an outbreak doesn't happen in our country.

The fact sheet also details the stringent passenger screening efforts both at home and abroad, noting that CDC has been working with airlines, airports, ministries of health, and other partners since the beginning of August to assist with the development of exit screening and travel restrictions in countries with Ebola.

All passengers leaving affected countries are screened for Ebola symptoms. Such screenings involve a travel health questionnaire, visual assessment for potential illness, and measuring the passenger's body temperature. These passengers are subject to additional measures upon arrival in the United States.

Officials are constantly evaluating the effectiveness of these and other potential measures, and will make adjustments as deemed prudent by health professionals and the appropriate U.S. departments and agencies.

For more details on these efforts -- along with how the U.S. is aiding the international response -- read the fact sheet here.