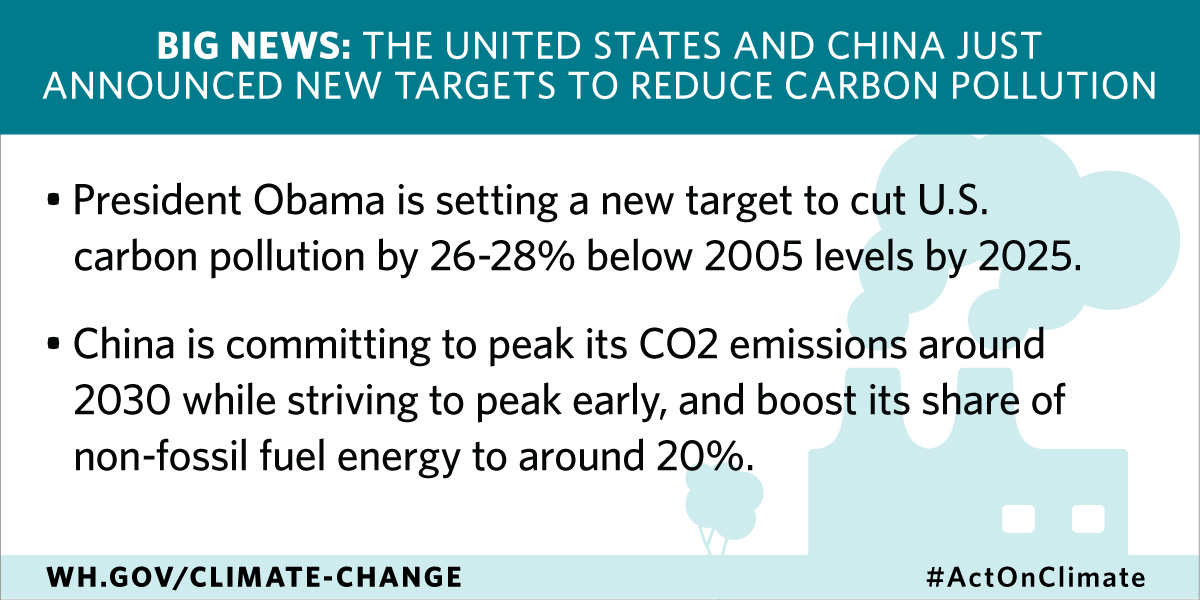 This announcement is a unique development in the U.S.-China relationship. The world’s two largest economies, energy consumers, and carbon emitters are reaching across traditional divides and working together to demonstrate leadership on an issue that affects the entire world.

By making this announcement well in advance of the deadline set out in the UNFCCC negotiations, the two leaders demonstrated their commitment to reducing the harmful emissions warming our planet, and urged other world leaders to follow suit in offering strong national targets ahead of next year’s final negotiations in Paris.

President Obama believes we have a moral obligation to take action on climate change, and that we cannot leave our children a planet beyond their capacity to repair. Over the last year, a spate of scientific studies have laid out the scope and scale of the challenge we face in the starkest of terms. “Climate change, once considered an issue for a distant future, has moved firmly into the present,” says the U.S. National Climate Assessment. “Without additional mitigation efforts…warming by the end of the 21st century will lead to high to very high risk of severe, widespread, and irreversible impacts globally,” the Intergovernmental Panel on Climate Change concludes.

In Copenhagen in 2009, President Obama pledged that the United States would reduce its greenhouse gas emissions in the range of 17 percent below 2005 levels by 2020. We’re on track to meet that goal while growing the economy and creating jobs, thanks to the historic fuel economy standards enacted during the President’s first term; the measures to reduce carbon pollution, deploy more clean energy, and boost energy efficiency through the President’s Climate Action Plan; and the leadership demonstrated by a growing number of U.S. businesses, who have increased their investment in clean technologies and pledged to phase down the potent greenhouse gases known as HFCs.

After 2020, the United States will reduce its net greenhouse gas emissions to 26-28% below 2005 levels by 2025. This goal is both ambitious and achievable, grounded in an intensive analysis of what actions can be taken under existing law, and will double the pace of carbon pollution reduction in the United States from the pre-2020 period. It also means the United States is doing its part to contain warming to 2 degrees Celsius, though achieving that global outcome will require global ambition and commitments from all economies. 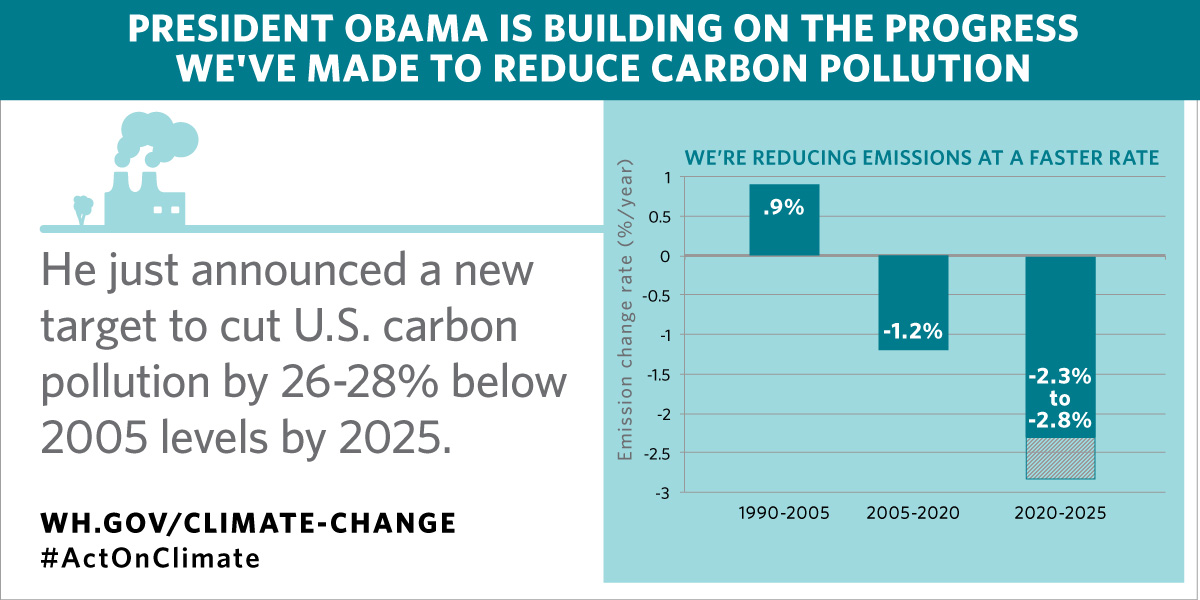 Chinese President Xi announced for the first time his intention to peak Chinese CO2 emissions around 2030, and further committed to make best efforts to peak early. China also announced a target of expanding the share of zero-emission sources in primary energy, namely renewables and nuclear, to 20% by 2030. To achieve that goal, China will have to deploy an additional 800-1,000 gigawatts of zero-emission generation capacity by 2030, about the same as all their current coal-fired capacity and nearly as much as the total installed capacity in the U.S. energy sector today.

“There’s one issue that will define the contours of this century more dramatically than any other,” President Obama said in September. “And that is the urgent and growing threat of a changing climate.”

Today in Beijing, the leaders of the world’s two largest economies -- and the world’s two biggest emitters -- stood together and committed to tackling that threat head-on. If other leaders follow suit, if more businesses step up, if we keep our level of ambition high, we can build the safer, cleaner, healthier, and more prosperous world future generations deserve.