The Road to the State of the Union (Spoiler Alert)

January 7, 2015 at 7:21 PM ET by Dan Pfeiffer
Twitter Facebook Email
Summary:
This year, President Obama is doing something he’s never done before: He’s laying out some of his State of the Union message and policies ahead of his address to Congress on January 20.

This year, President Obama is doing something he’s never done before: He’s laying out some of his State of the Union message and policies ahead of his address to Congress on January 20.

Typically, we try to hold all the news until the day of the speech. And there will still be plenty of moments on the big night. But this year, we figured there’s no time like the present. (For those who closely follow the President’s executive actions, there is a “we can’t wait” joke in there somewhere.) Building on the momentum of the last several weeks, the President didn’t want to wait until the State of the Union to take new steps to help the middle class and lay out his ideas to keep strengthening the economy.

So today, the President is getting out of Washington and taking his message on the road — straight to the people his policies will affect most.

As President Obama travels the country, he’ll be putting forward next steps, too. Call them “SOTU Spoilers.” Some of his announcements will be executive actions, and others will be legislative proposals. And despite what you might hear from the Beltway pundits, this President looks forward to working with the new Republican Congress on ways we can move America forward.

That means working with the 114th Congress to make sure that more middle class families feel the benefits of our recovery. But it also means making sure that the new Congress doesn’t roll back the progress and protections that Americans have fought so hard for over the last six years.

Today, President Obama will be at Ford’s assembly plant in Wayne, Michigan to talk about the comeback of American manufacturing and the American auto industry. The year before he took office, the auto industry was in collapse, shedding 400,000 jobs. Sales were down 40 percent. Two of the big three auto companies — icons of American ingenuity — were on the brink of failure.

Some were ready to let the entire auto industry fail. You might have even seen headlines proclaiming that was the smart move, politically. But President Obama refused to let more jobs and communities suffer. He made the hard choice to restructure and rebuild, helping those businesses get back on their feet while demanding real change and accountability in return.

Six years later — as the President will note today — the American auto industry has roared back to life. Since mid-2009, they’ve added more than 500,000 jobs. Last year, American autoworkers built cars faster than any year since 2005. Not to mention they’ve repaid taxpayers every dime and more of what the Obama administration committed to them. 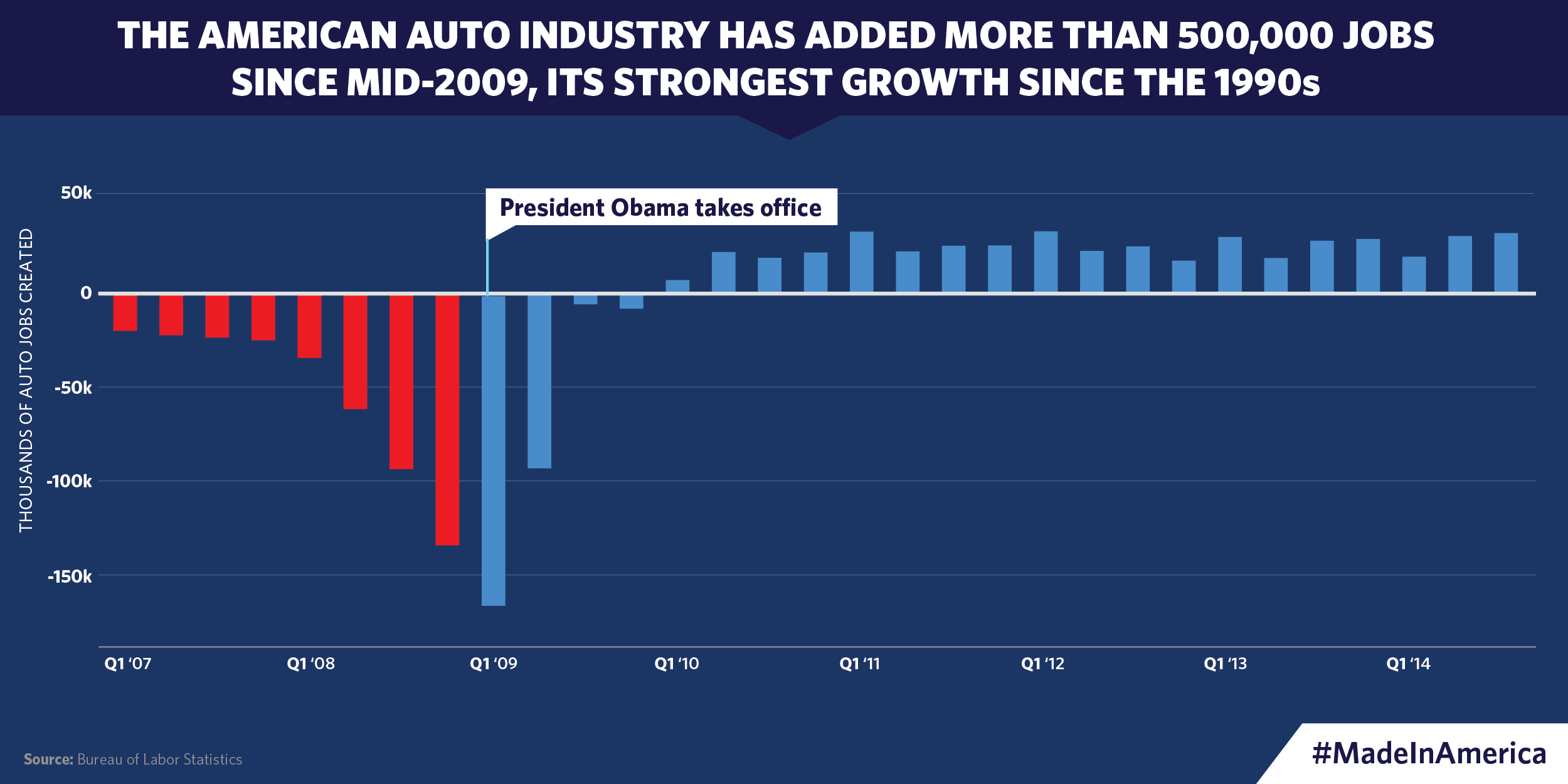 Thursday in Phoenix, the President will take stock of how far our housing market has come. In 2009, the housing market was in freefall. Thanks in part to President Obama’s swift intervention when he took office, our housing market is on much firmer footing. Rising home values have helped millions of families who were underwater on their mortgages, and new foreclosures are at their lowest levels since 2006.

Still, homeownership is out of reach for too many Americans — families who can afford to buy a home, but find themselves shut out because the lending market is too tight. That’s why the President will announce a new executive action that will help more responsible Americans own a home, building on efforts already underway to cut red tape that holds them back.

This Friday, President Obama will travel to Tennessee with the Vice President to propose ways to help more young Americans go to college and get ahead. In today’s economy, access to a college education is the surest ticket to the middle class — and the President’s proposals will help more young people punch that ticket.

We have come a long way since that first State of the Union address six years ago.

We’ve created nearly 11 million jobs over the past 57 months — the longest streak of private-sector job growth on record. 2014 was our strongest year of job growth since the ‘90s. In the last year alone, about 10 million Americans have gained health insurance thanks to the Affordable Care Act. Drivers are saving more than a dollar a gallon at the pump relative to this time last year. We’ve seen the wars in Iraq and Afghanistan come to a responsible end, and more of our troops are coming home to their families.

There’s a lot more to do. And I can promise you that in the eight years I have worked for President Obama, I have never seen him more fired up about the road ahead.

So stay tuned. Because as the President said about the next two years: