Week in Review: Let Girls Learn, a Ceremony for the Attorney General, and New Jobs Numbers

March 6, 2015 at 6:05 PM ET by Chris Evans
Twitter Facebook Email
Summary:
From joining the First Lady to announce the Let Girls Learn initiative, to this month's new job numbers, the President had a pretty productive week. See more in the Week in Review.

That's the number of girls worldwide that aren't in school. And it's why the President and First Lady announced the "Let Girls Learn" initiative on Tuesday.

Let Girls Learn focuses on supporting women and girls' education around the world. Partnering with the Peace Corps, we're taking action to support hundreds of new community projects -- from building new libraries to providing resources so girls can travel to school free from fear. These initiatives will help keep girls in school, which consistently proves beneficial for all.

"I'm convinced that a world in which girls are educated is a safer, more stable, more prosperous place," said the First Lady.

Watch the President’s and First Lady’s remarks, and learn more about the initiative.

The President spoke at the portrait unveiling ceremony for U.S. Attorney General Eric Holder -- who is departing after more than six years on the job. Calling him "one of our finest," President Obama detailed the Attorney General's accomplishments -- including hundreds of terrorism convictions, reforms to our criminal justice system, challenges to discriminatory state immigration laws, record prosecutions of hate crimes, and fierce defense of the Voting Rights Act. 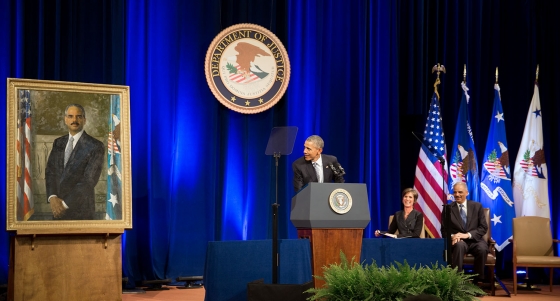 "Saying goodbye is bittersweet," the President said to the Attorney General. "You have done a remarkable job. It's hard to let you go."

The Most Progressive Trade Agreement in History

Trade has been central to our economic resurgence, contributing to nearly a third of our economic growth in the recovery and supporting 11.7 million American jobs in 2014 alone. That's why it's time to secure a trade deal that reflects the best of our values and ensures continued economic growth.

It's time for a trade deal that helps American workers and protects our environment. #LeadOnTrade pic.twitter.com/z6dbQOBlpW

Learn more about the President's trade proposal and share these graphics.

How We Celebrated Black History Month

During Black History Month, the White House hosted a number of events and activities to celebrate the contributions and accomplishments of African Americans, both past and present. From honoring the women of the Civil Rights Movement, to telling the untold stories of African Americans in STEM, to talking with faculty and alumni from our nation's Historically Black Colleges and Universities, it was an eventful month here at 1600 Pennsylvania Avenue.

Watch the wrap-up video from this year's Black History Month events at the White House.

With another robust employment report, we have now seen 12 straight months of private-sector job gains above 200,000. It’s the first time that this has happened since 1977. While 2014 was the best year for job growth since the late 1900s, 2015 has continued at this pace. Beyond this, the private sector has added 12 million jobs over 60 straight months of job growth, which extends the longest streak on record.