New data released today by the Kaiser Family Foundation show that premium growth in employer-sponsored coverage remained slow in 2015, extending the recent streak of unusually slow growth. Taken together with estimates of current trends in Medicare spending released this summer, these data suggest that underlying growth in per-enrollee health care costs remains low, even as the dramatic expansion in coverage since early 2014 drives a temporary uptick in the growth of aggregate health care spending. Recent years’ slow growth in health care costs—which is thanks in part to the Affordable Care Act—is already generating major benefits for workers and our fiscal outlook. Looking ahead, keeping these positive trends going will require that we continue to make good use of the tools provided by the Affordable Care Act, including: moving our health care system toward payment models that reward efficient, high-quality care; continuing to foster a transparent and competitive Health Insurance Marketplace; and implementing the law’s tax provision that encourages high-cost employer plans to become more efficient.

SIX KEY POINTS ON NEW DATA ON EMPLOYER COVERAGE IN 2015

1. Premiums in employer-based coverage continued to grow slowly in 2015. The new Kaiser survey finds that the average premium for employer-based family coverage grew 4.2 percent in 2015. While slightly faster than the record-tying 3 percent rate recorded in 2014, this reading for 2015 continues the recent pattern of unusually slow growth; the last four years account for four of the five lowest growth rates since the survey began in 1999. The Kaiser estimates corroborate earlier estimates from the Bureau of Labor Statistics’ Employer Cost Index that showed that slow growth in employers’ health benefit costs continued into 2015, as well as results from a national survey released last week by the consulting firm Mercer, which found that employers have seen slow growth persist through 2015 and expect it to continue into 2016.

Sustained slow premium growth is generating major benefits for families and businesses. Had premium growth since 2010 matched the average rate recorded over the preceding decade, the average total premium for employer-based family coverage would have been nearly $2,600 higher in 2015. A large portion of these savings have accrued directly to workers in the form of lower premium contributions. Employers’ savings on their portion of premium spending may be reducing total compensation costs in the short run, helping to boost job growth; economic theory and evidence indicate that these savings will be passed on to workers as higher wages in the long run. 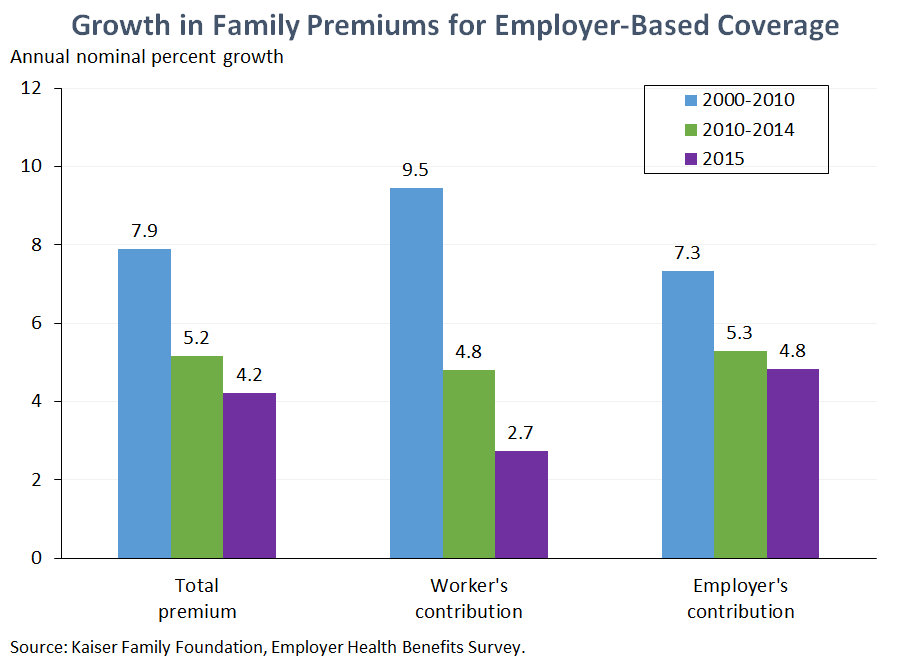 2. Recent estimates suggest that Medicare spending per enrollee is continuing to grow slowly as well. In July, the Office of the Actuary at the Centers for Medicare and Medicaid Services released updated projections of growth in per-enrollee spending in Medicare for 2014 and 2015. While these estimates are projections, they reflect data on actual Medicare spending for all of 2014 and part of 2015, so they tend to be particularly reliable. Nominal Medicare spending per beneficiary is projected to grow just 1.0 percent in 2015, only slightly faster than recent projections of overall inflation in 2015 and slower than measures of inflation that exclude the recent sharp decline in energy prices. If this projection holds, then 2015 will be the sixth consecutive year in which growth in Medicare spending per beneficiary was roughly in line with overall inflation economy-wide, a stark contrast to trends over the decade preceding 2010. 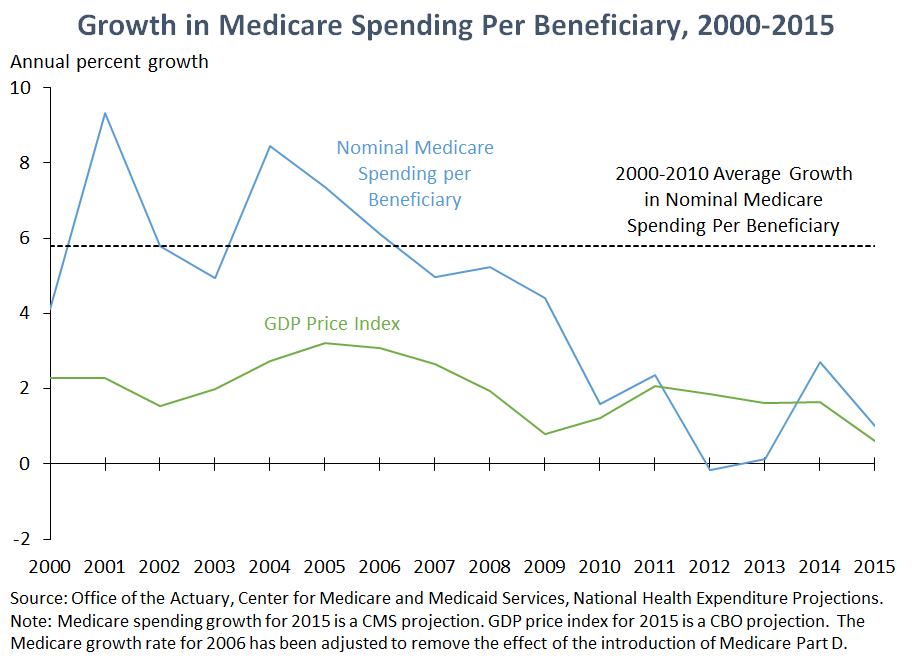 3. The continued slow growth in per-enrollee spending in employer coverage and Medicare shows that the pickup in aggregate health care spending growth since the start of 2014 largely reflects transient effects of expanding coverage. Data for the last several quarters have shown a turn toward faster (though still moderate in historical terms) growth in aggregate spending on the three largest categories of health care goods and services: hospital services, ambulatory services, and prescription drugs.

However, this faster aggregate growth does not reflect rapid growth in the cost of health care for an individual or a family; the data presented above for the two largest segments of the United States health care system indicate that growth in per-enrollee costs has ticked up only modestly, if at all. Rather, the driving factor is likely the significant expansion in insurance coverage since late 2013 as the main coverage provisions of the Affordable Care Act have taken effect, an expansion of coverage that is by far the largest since the decade following the creation of Medicare and Medicaid. As we have noted on several prior occasions, it is not a surprise, nor a cause for concern, to see a temporary period of faster growth as newly insured individuals begin to access care.

The exception is prescription drug spending, where the uptick in spending growth is much larger than can be accounted for by recent coverage expansions. Available data indicate that the main factor driving faster drug spending has been the arrival of costly, though often effective, new therapies. While the implications of the recent acceleration in drug spending for the overall health care spending outlook should not be overstated since drug spending currently accounts for only about one-tenth of total health care spending and drug spending growth may decline somewhat relative to its recent rapid pace, trends in this area have raised concerns about access and affordability in both the public and private sectors. 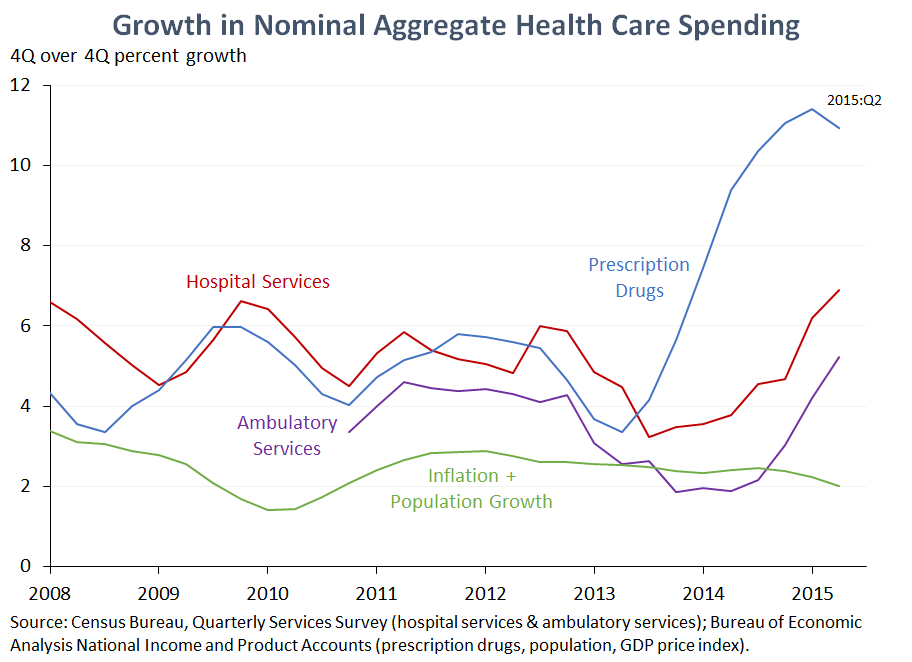 4. Average deductibles in employer coverage rose again in 2015, but the increase was in line with trends stretching back more than a decade. Typical deductibles in employer coverage have been rising for more than a decade, and the new Kaiser data indicate that that trend continued in 2015. As demonstrated in the figure above, however, neither the Kaiser data nor the Medical Expenditure Panel Survey (which provides a longer-term view on these trends) indicate that deductibles have risen more quickly in recent years. This means that there is no sense in which continued growth in deductibles is “cancelling out” the benefits to workers stemming from recent years’ very slow premium growth and that rising deductibles are unlikely to be an important reason that premium growth has been so much slower recently than in the past. 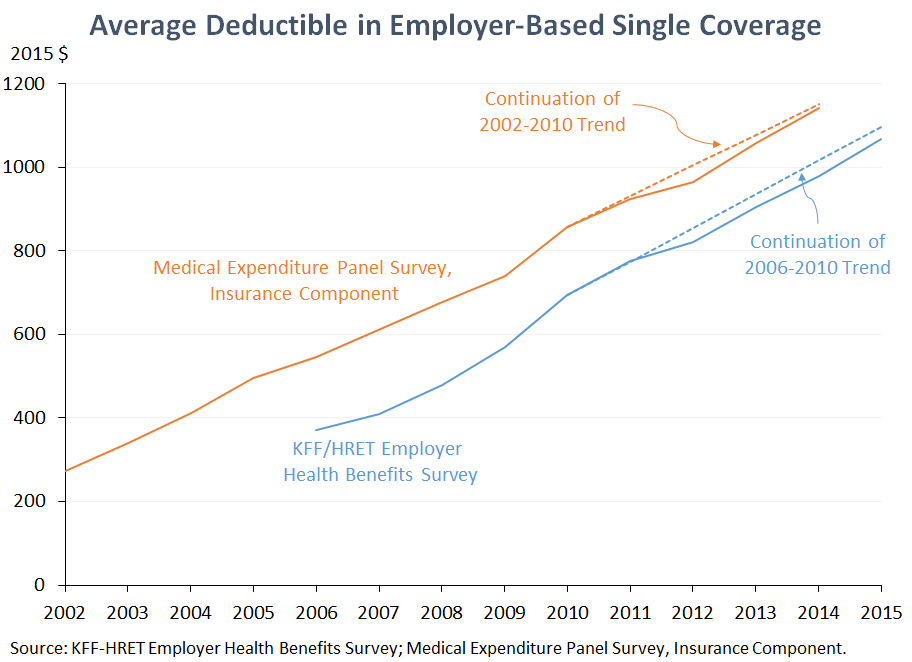 5. Virtually all workers enrolled in employer coverage now have a limit on their annual out-of-pocket spending, a protection that more than one in six enrolled workers lacked when the ACA became law. One core function of health insurance is to provide protection against catastrophic costs in the face of serious illness. Starting in 2014, the ACA required that all non-grandfathered health insurance plans place a limit on total annual out-of-pocket spending, protection which 18 percent of workers enrolled in single coverage lacked as of 2010, according to the Kaiser survey. The share without an out-of-pocket limit drifted lower after 2010 (possibly in part because firms were preparing for 2014), then fell sharply as the ACA requirement took effect; today’s data show that just 2 percent of workers in single coverage lacked such a limit in 2015. If the prevalence of out-of-pocket limits had remained at its 2010 level, we estimate that at least 22 million people enrolled in employer coverage would lack this protection today. 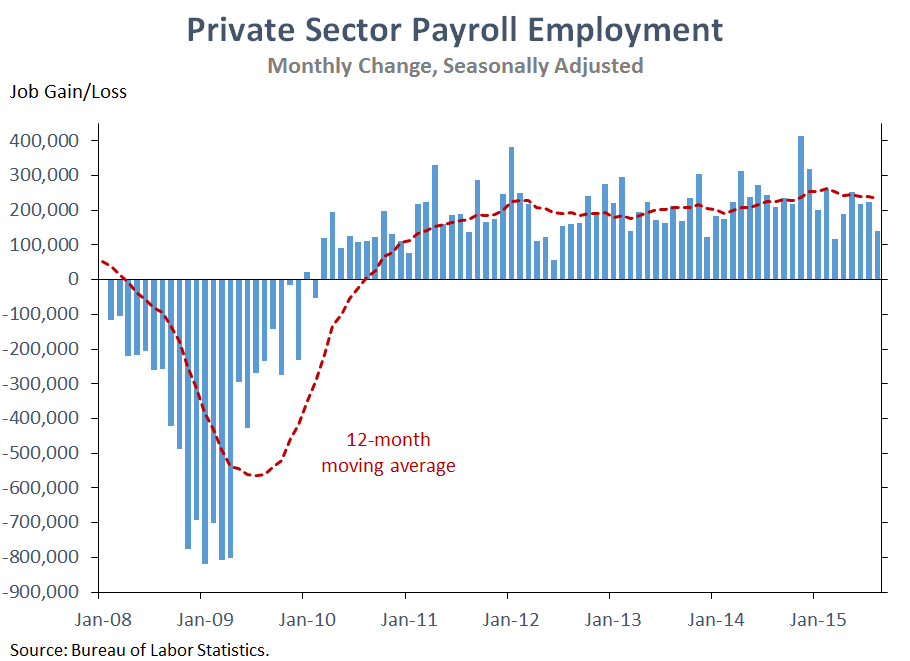 Matt Fiedler is Chief Economist of the Council of Economic Advisers.