April 28, 2016 at 9:30 AM ET by Jason Furman
Twitter Facebook Email
Summary:
Real GDP rose 0.5 percent at an annual rate in the first quarter according to the advance estimate, even as job growth remains strong.

The economy grew 0.5 percent at an annual rate in the first quarter of 2016, a slower pace than last quarter. Strong growth in residential investment boosted real GDP growth, but weakness in business investment and net exports—exacerbated by weak foreign demand and low oil prices—weighed on growth. Consumer spending grew at a moderate pace in the first quarter. Overall, the most stable and persistent components of output—consumption and fixed investment—rose 2.6 percent over the past four quarters. Nevertheless, labor market data remain robust, with continuing private-sector job creation, increasing labor force participation, and historically low levels of Unemployment Insurance claims. Today’s report underscores that there is more work to do, and the President will continue to call on Congress to support policies that will boost our long-run growth and living standards, including policies to support innovation and investments in infrastructure and job training and to promote greater competition across the economy, as well as high-standards free trade agreements like the Trans-Pacific Partnership.

1. Real Gross Domestic Product (GDP) increased 0.5 percent at an annual rate in the first quarter of 2016, according to BEA’s advance estimate. Consumer spending grew 1.9 percent, below its pace over the prior four quarters, as spending on durable goods fell while spending on services and nondurables rose at roughly their recent pace. GDP growth was supported by strength in residential investment, which increased 14.8 percent in the first quarter and which has been a positive contributor in recent years (see point 4 below). However, nonresidential investment fell 5.9 percent, weighed down by a further sharp contraction in investment in equipment and oil-related structures. Slowing global demand continues to remain another key drag on real GDP growth, with real exports falling 2.6 percent and subtracting 0.3 percentage point from growth in the first quarter. 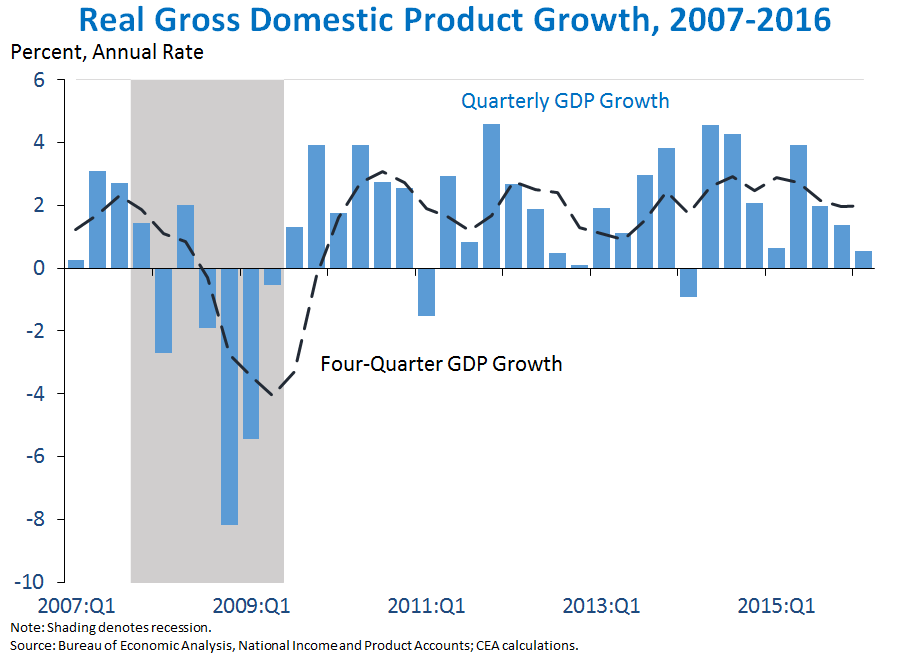 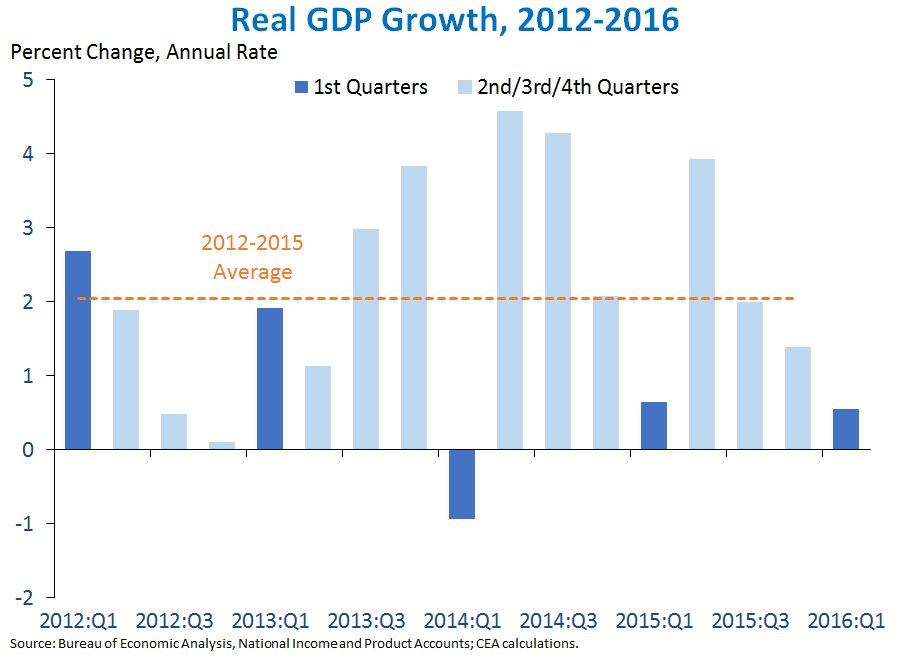 3. Business fixed investment declined in the first quarter, driven in large part by oil-related declines, but private investment in research and development (R&D) as a share of GDP rose close to a new high. Real investment in equipment and structures both fell sharply in the first quarter; on the other hand, real investment in intellectual property products (IPP)  showed positive growth, with its private R&D investment component nearly matching its recent all-time high as a share of output. More broadly, investment growth has slowed in recent years, as discussed in Chapter 2 of the 2016 Economic Report of the President. During 2014, all three major categories of business fixed investment—structures, equipment, and IPP—rose, adding a combined 0.7 percentage point to real GDP growth. In 2015, falling oil prices led to a decline in oil drilling and mining structures investment, subtracting from overall growth; on the other hand, the other components of investment remained positive during 2015. Since then, growth in equipment investment has turned negative, due in part to weaker foreign demand and reduced demand from energy producers for equipment. Slow investment growth can weigh on future output growth, since less capital deepening implies lower future productivity growth, but increases in R&D investment would offset some of this change and contribute positively to future productivity growth. 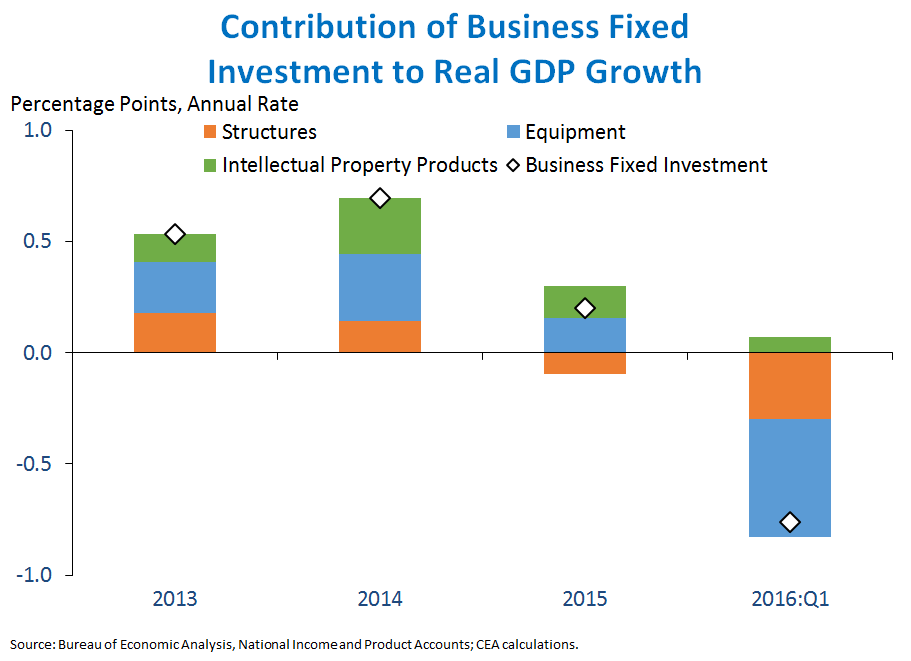 4. Real residential fixed investment rose 14.8 percent at an annual rate in the first quarter, a step up in growth from 2015, with continued potential for strong growth in coming quarters. Residential investment has grown by more than 8 percent for six straight quarters, highlighting the solid, steady recovery in the housing sector, which has been supported by strong job growth and low mortgage rates. Growth in residential investment has substantially outpaced growth in GDP and in the first quarter contributed 0.5 percentage point to growth. 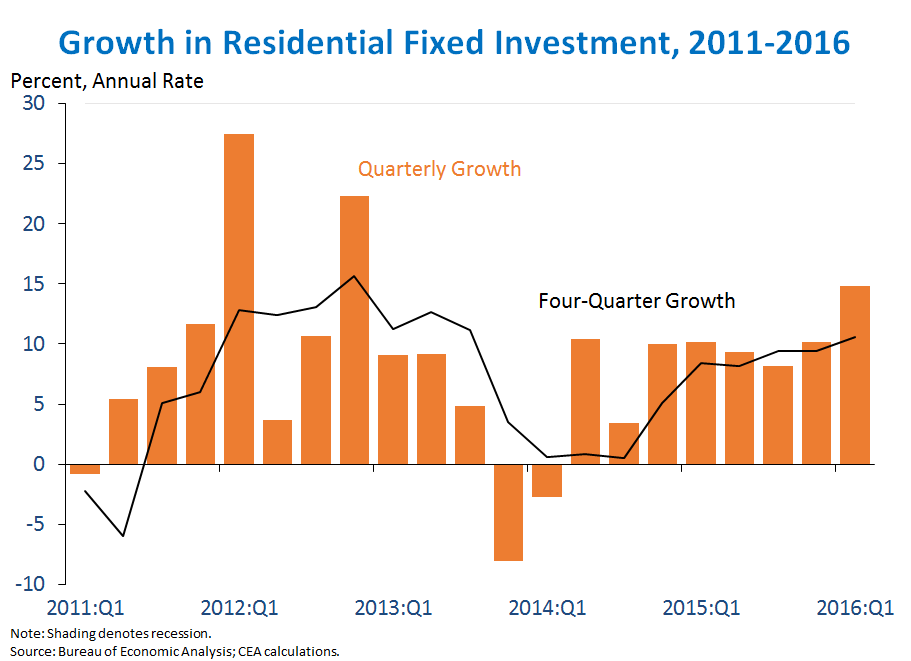 Even with the solid growth in recent years, there is room for further expansion. Household formation picked up in 2015, but had been low relative to historical trends for several years, indicating potential additional demand for housing construction. Housing starts have risen steadily since 2012 and stood at 1.1 million units at an annual rate in March 2016. Even with this improvement, this value is well below the 1.5-to-1.7 million unit range that would be consistent with long-term demographics and replacement of existing housing stock. Housing construction thus has room to expand further and remains a bright spot in domestic demand. 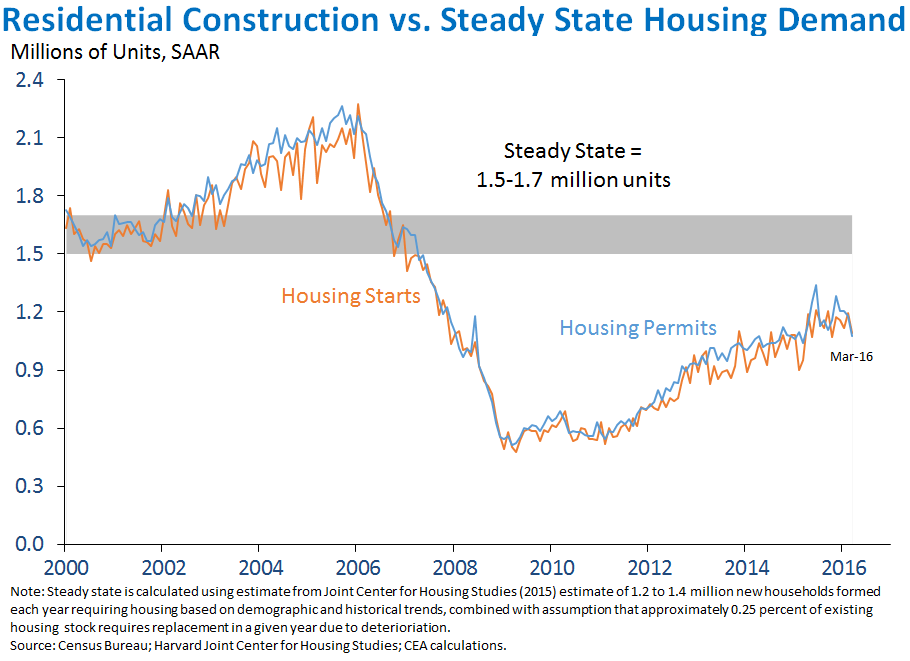 5. Real private domestic final purchases (PDFP)—the sum of consumption and fixed investment—rose 1.2 percent at an annual rate in the first quarter, a faster pace than GDP but a slower pace than in recent quarters. Real PDFP—which excludes noisier components like net exports, inventories, and government spending—is generally a more reliable indicator of next-quarter GDP growth than current GDP. The effects of weaker foreign growth, however, have consistently offset some of the strength in domestic demand over the past few years. Overall, PDFP rose 2.6 percent over the past four quarters, compared with 2.0-percent GDP growth over the same period.  The slowdown in growth this quarter relative to the past year was mostly due to components of PDFP, with transitory factors making roughly the same contributions to growth in the first quarter as in the previous four quarters. 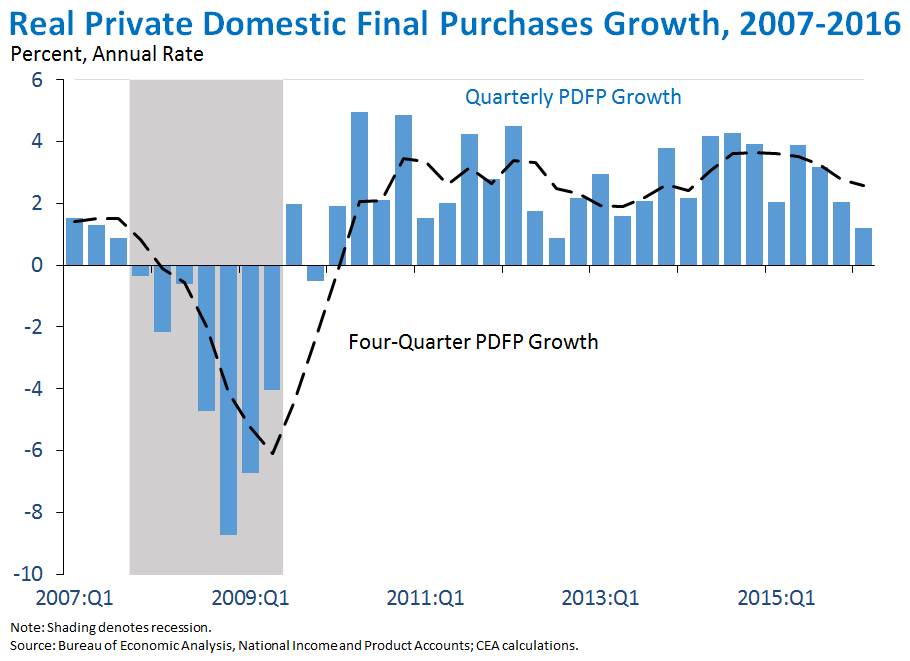