May 27, 2016 at 9:30 AM ET by Jason Furman
Twitter Facebook Email
Summary:
Real GDP growth was revised up to 0.8 percent at an annual rate in the first quarter.

First-quarter economic growth was revised up 0.3 percentage point to 0.8 percent at an annual rate. Strong growth in residential investment boosted real GDP growth, but weakness in business investment and exports—exacerbated by weak foreign demand and low oil prices—weighed on growth. Consumer spending grew at a moderate pace in the first quarter. Nevertheless, labor market data remain robust, with continuing private-sector job creation and wage growth picking up noticeably so far in 2016. But there is more work to do, and the President will continue to call on Congress to support policies that will boost our long-run growth and living standards, including policies to support innovation and investments in infrastructure and job training and to promote greater competition across the economy, as well as high-standards free trade agreements like the Trans-Pacific Partnership.

1. Real Gross Domestic Product (GDP) rose 0.8 percent at an annual rate in the first quarter of 2016, according to BEA’s second estimate.  In the first quarter, GDP grew faster than originally estimated, but growth remained slower than the 1.4-percent rate in the fourth quarter of 2015. GDP growth was supported by strength in residential investment, which increased 17.1 percent (see point 3 below). Consumer spending grew 1.9 percent, a moderate pace but below its rate over the prior four quarters. Business fixed investment contracted 6.2 percent in the first quarter, reflecting ongoing declines in investment in oil-related structures as well as a decline in equipment investment. Inventory investment subtracted 0.2 percentage point from GDP growth. Slowing global demand continues to remain a key drag on real GDP growth, with real exports falling 2.0 percent and subtracting 0.2 percentage point from growth. 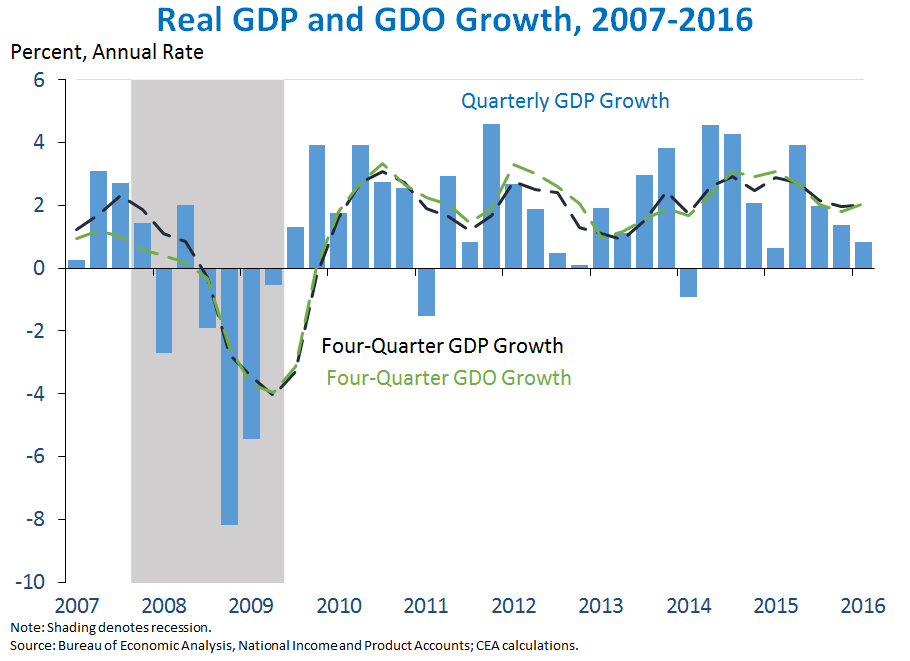 2. First-quarter GDP growth was revised up 0.3 percentage point at an annual rate. The upward revision to overall GDP growth was due to upward revisions in private inventory investment, residential fixed investment, and net exports, which each added about one-tenth of a percentage point to GDP growth relative to the advance estimate. Revisions to other components were generally small and offsetting, with the overall contour of first-quarter growth little changed from last month’s advance estimate.

In today’s release, BEA also revised up its estimate of real GDI growth in the fourth quarter of 2015 from 0.9 percent to 1.9 percent due to an upward revision to wages and salaries. This boosted fourth-quarter GDO growth to 1.7 percent, a stronger pace than the previously reported 1.1 percent. 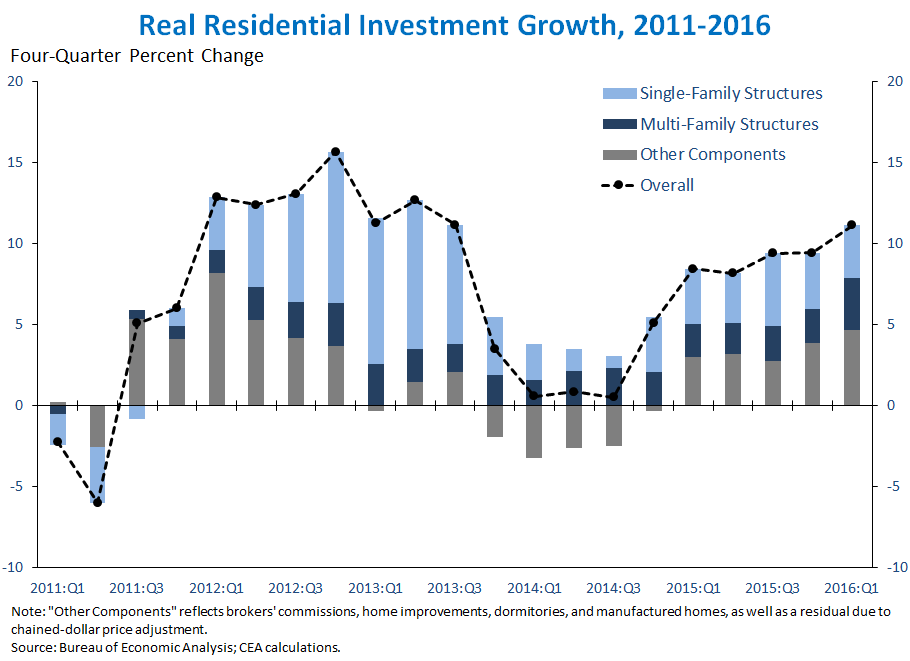 4. Slower productivity growth remains a key challenge facing the United States and other advanced economies. Although productivity growth began to slow around 2004, this shift has become more pronounced in recent years, as robust growth in employment has coincided with slower growth in output. In the first quarter, aggregate hours for the total private economy rose 1.8 percent as real GDP grew 0.8 percent—pointing to a decline in overall labor productivity (real output per hour). Some of the recent slowdown has been due to slower growth in total factor productivity (TFP), a measure of how much output can be produced from a given combination of labor and capital that in part represents advancements in technology. However, in recent years the largest contributor to low productivity growth has been a lack of capital deepening. Due to a shortfall in investment, capital services per worker hour decreased over the last five-years. 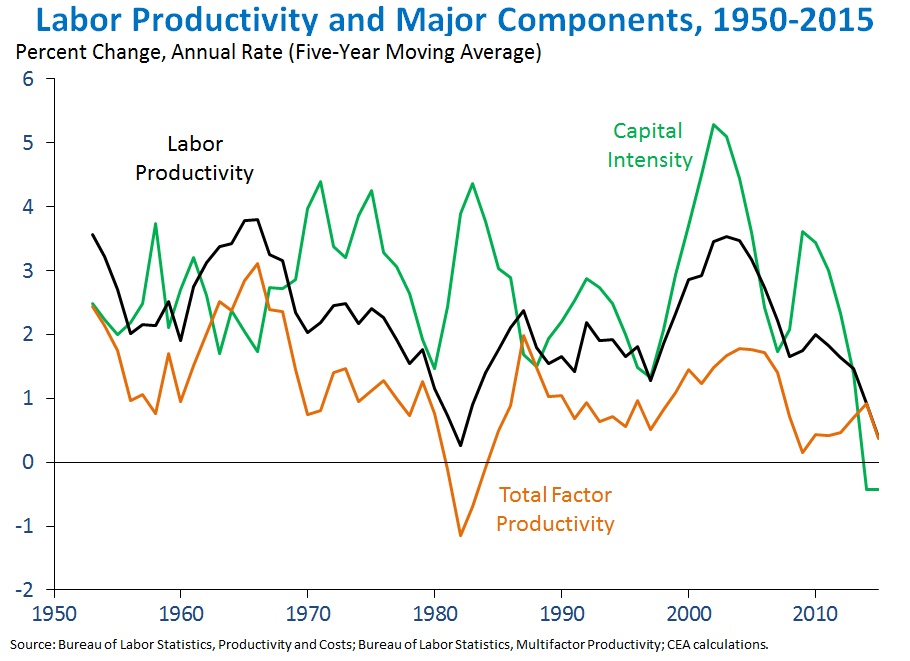 Low productivity growth in recent years has been a global phenomenon, with nearly all advanced economies seeing lower growth rates than in earlier decades; likewise, capital deepening has slowed considerably in nearly all major advanced economies. Overall, productivity growth slowed in 30 of 31 advanced economies between 1995-2005 and 2005-2015, though the United States had the strongest productivity growth of any of the G-7 economies over the last 10 years.  While some of the slowdown the United States may be due to shifts in the composition of workers and sectors in the economy, faster growth in both innovation and investment will be needed to lift productivity growth—the most important factor for raising living standards in the long run. Steps in this direction include greater investment in infrastructure and in research and development (R&D), as well as commonsense reforms to the patent system and the business tax code to encourage innovation. 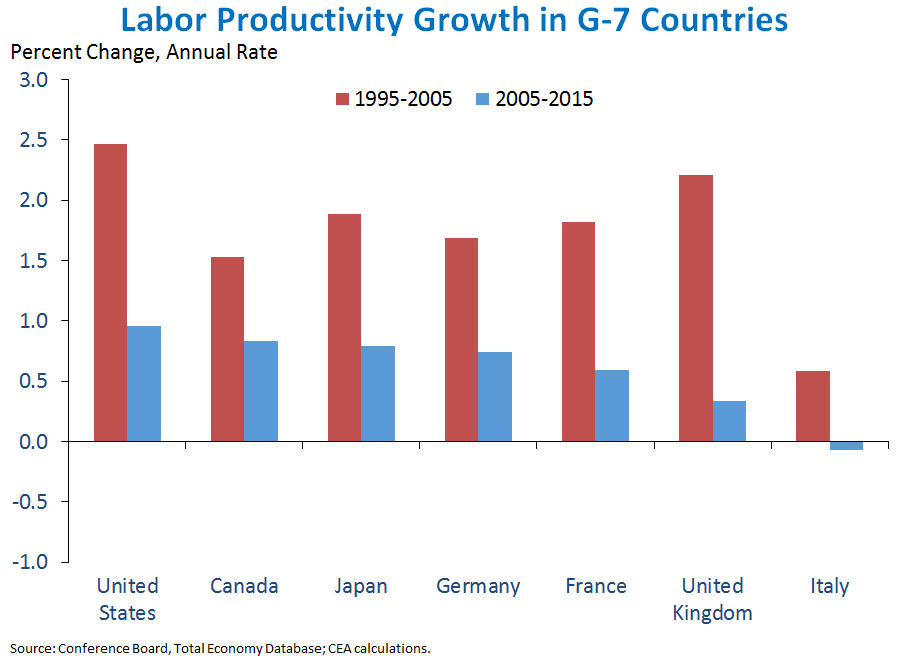 5. Real private domestic final purchases (PDFP)—the sum of consumption and fixed investment—rose 1.2 percent at an annual rate in the first quarter, a faster pace than GDP but a slower pace than in recent quarters. Real PDFP—which excludes noisier components like net exports, inventories, and government spending—is generally a more reliable indicator of next-quarter GDP growth than current GDP. The effects of weaker foreign growth, however, have consistently offset some of the strength in domestic demand over the past few years. Overall, PDFP rose 2.6 percent over the past four quarters, compared with 2.0-percent GDP growth over the same period. 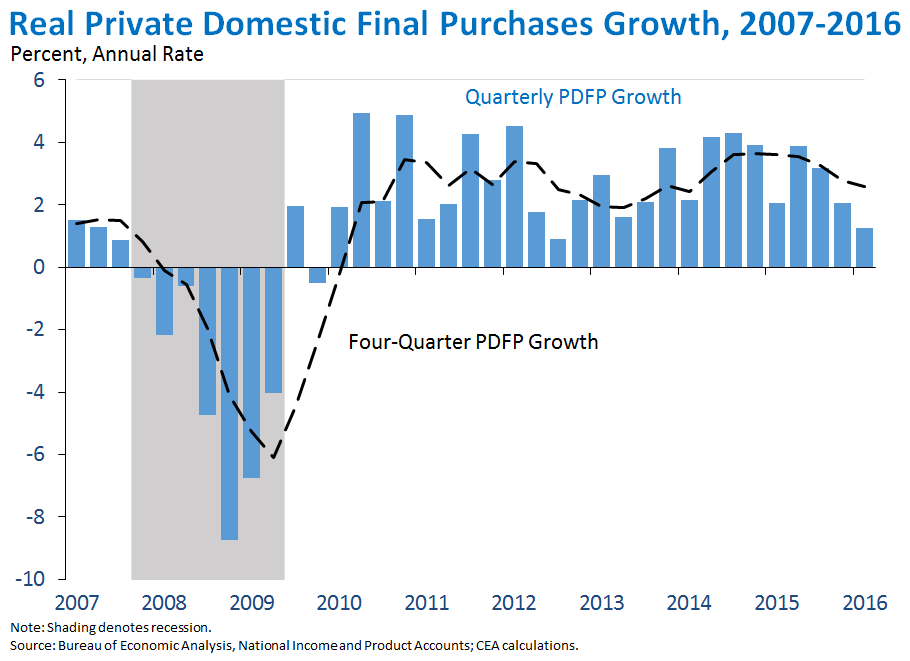