July 29, 2016 at 9:30 AM ET by Jason Furman
Twitter Facebook Email
Summary:
Real GDP grew 1.2 percent at an annual rate in the second quarter, with strong consumer spending growth offset in part by a decrease in inventory investment.

The economy grew 1.2 percent at an annual rate in the second quarter of 2016, due in part to a large decline in inventory investment (one of the most volatile components of GDP), along with declines in business investment, residential investment, and government spending. However, consumer spending grew strongly at 4.2 percent, and, in contrast to the pattern in recent years, net exports also added to GDP. Overall, the most stable and persistent components of output—consumption and fixed investment—rose a solid 2.7 percent in the second quarter. Today’s report underscores that there is more work to do, and the President will continue to take steps to strengthen economic growth and boost living standards, including promoting greater competition across the economy; supporting innovation; and calling on Congress to increase investments in infrastructure and to pass the high-standards Trans-Pacific Partnership.

1. Real Gross Domestic Product (GDP) increased 1.2 percent at an annual rate in the second quarter of 2016, according to BEA’s advance estimate. Consumer spending grew 4.2 percent, well above its pace over the prior four quarters, with pickups in growth in both durable and nondurable goods spending (see point 2 below). In addition, export growth was positive in the second quarter, and net exports contributed positively to GDP growth. However, inventory investment—one of the most volatile of the major components of GDP (see point 3 below)—subtracted 1.2 percentage point from GDP growth. Fixed investment declined, weighed down by contractions in investment in both equipment and structures amid low oil prices as well as a notable decline in residential investment following eight straight quarters of increases. Real GDP growth in the first quarter was revised down by 0.3 percentage point to 0.8 percent at an annual rate. 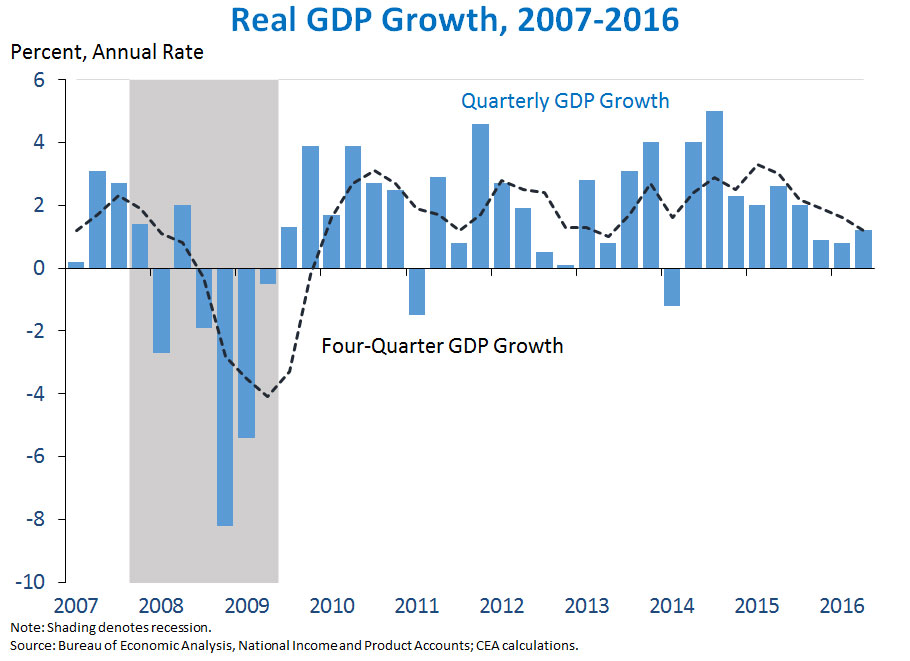 2. Real personal consumption expenditures, which account for over two-thirds of GDP, grew 4.2 percent at an annual rate in the second quarter. This ranks among the three strongest quarters for consumer spending growth since 2006. Consumer spending contributed 2.8 percentage points to GDP growth in the second quarter, reflecting improved economic conditions for many households. Over the last year, nominal wages have grown at the fastest pace since the financial crisis, the economy has continued to add jobs, and the University of Michigan index of consumer sentiment remains near its highest levels in over a decade. In line with improved sentiment, consumption growth in the second quarter was broad-based. Durable goods spending saw a noticeable pickup in growth from the first quarter, while the recent solid pace of services spending growth persisted and nondurable goods spending saw its fastest quarterly growth since 2006. 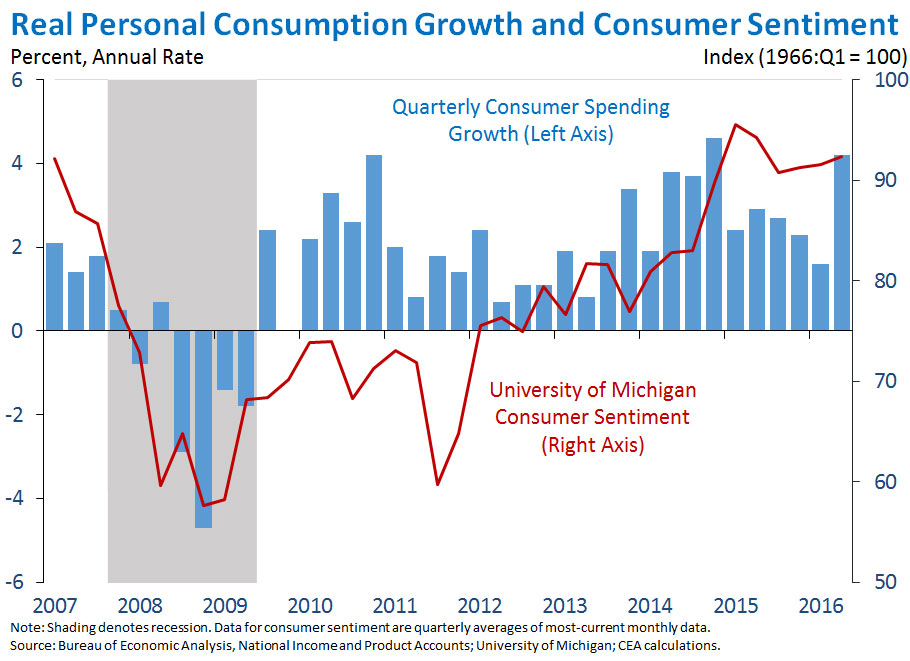 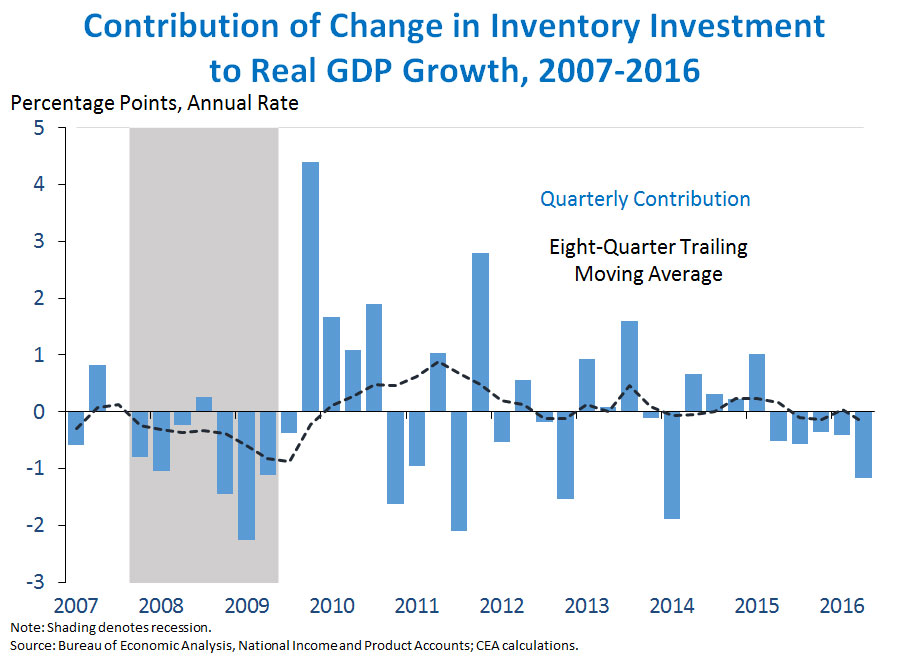 4. Revisions to historical GDP figures for 2013, 2014, and 2015 in today’s release left average annual growth unchanged but shifted the seasonal pattern of growth. Overall, average annual GDP growth from the fourth quarter of 2012 to the fourth quarter of 2015 remained unchanged at 2.3 percent. However, the pattern of growth within each of these years changed noticeably with the revisions released today, as the BEA took steps to reduce “residual seasonality”—a regular pattern of slower growth in the first quarter of each year despite seasonal adjustment of GDP growth. Average first-quarter growth in 2013, 2014, and 2015 was revised up from 0.5 percent at an annual rate to 1.2 percent at an annual rate; this upward revision was mirrored by a downward revision of similar magnitude for second-quarter growth, from 3.2 percent to 2.5 percent. Average third- and fourth-quarter growth saw smaller revisions. BEA has announced that it will make more thorough changes to its methodology in 2018 to further address residual seasonality and to revise data for earlier years. 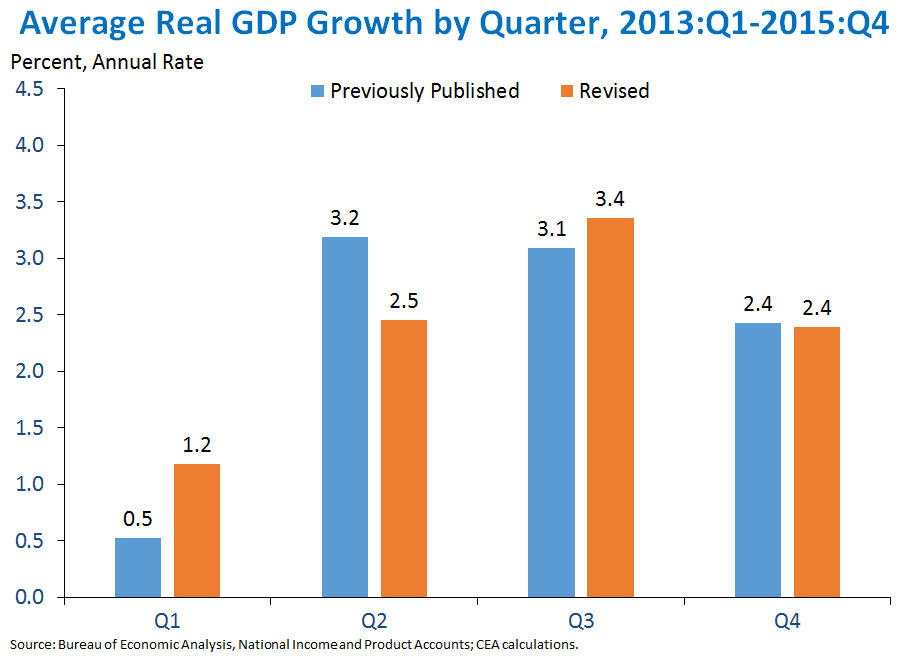 5. Real private domestic final purchases (PDFP)—the sum of consumption and fixed investment—rose 2.7 percent at an annual rate in the second quarter, noticeably faster than overall GDP growth. PDFP—which excludes more volatile components of GDP like net exports and inventory investment, as well as government spending—is generally a more reliable indicator of next-quarter GDP growth than current GDP. In recent quarters, weaker foreign demand has dampened business investment, and low oil prices have weighed on energy-related investment, both of which have typically led to slower PDFP growth. In the second quarter, though, these drags on growth were offset by strong consumer spending, resulting in a solid pace of PDFP growth. The gap between PDFP and GDP growth this quarter is more than accounted for by movements in inventory investment. Overall, PDFP rose 2.2 percent over the past four quarters, above the 1.2-percent growth in GDP over the same period. 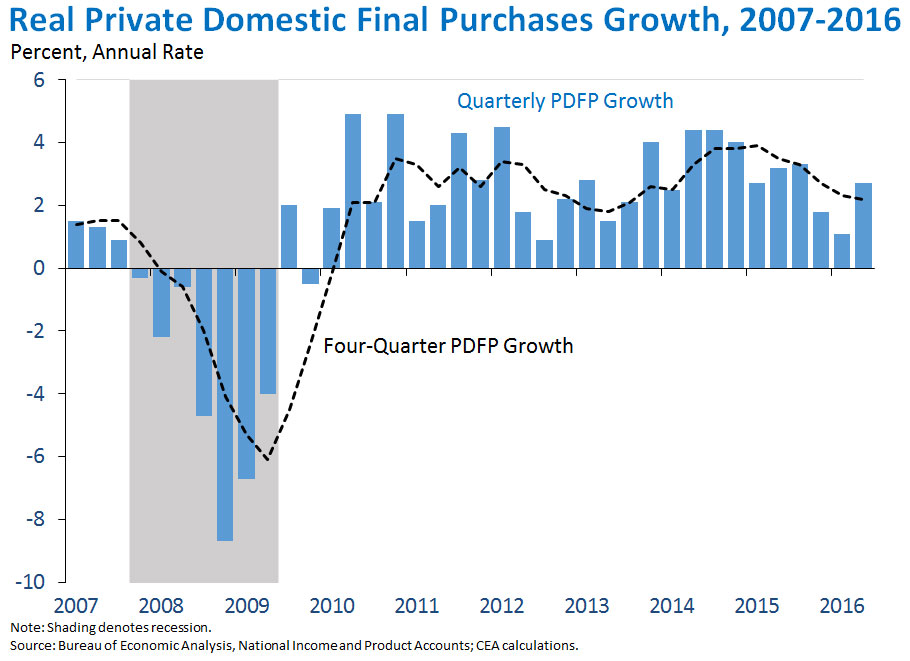