November 4, 2016 at 9:30 AM ET by Jason Furman
Twitter Facebook Email
Summary:
The economy added 161,000 jobs in October and over the past year has seen the fastest annual wage growth since the end of the recession.

The economy added 161,000 jobs in October—well above the pace needed to maintain a low and stable unemployment rate—as the longest streak of total job growth on record continued. U.S. businesses have now added 15.5 million jobs since early 2010. Most importantly, average hourly earnings for private employees increased 2.8 percent over the last twelve months, the fastest twelve-month pace since the recovery began and much faster than the pace of inflation. In fact, real wages have grown faster over the current business cycle than in any since the early 1970s. Nevertheless, more work remains to continue to boost wage growth and to ensure that the benefits of the recovery are broadly shared, including increasing investment in infrastructure; implementing the high-standards Trans-Pacific Partnership; taking steps to spur competition to benefit consumers, workers, and entrepreneurs; and raising the minimum wage.

FIVE KEY POINTS ON THE LABOR MARKET IN OCTOBER 2016

1. U.S. businesses have now added 15.5 million jobs since private-sector job growth turned positive in early 2010. Today, we learned that private employment rose by 142,000 jobs in October. Total nonfarm employment rose by 161,000 jobs, slightly below the monthly average for 2016 so far but substantially higher than the pace of about 80,000 jobs per month that CEA estimates is necessary to maintain a low and stable unemployment rate given the impact of demographic trends on labor force participation. Total job growth for August and September was revised up by a combined 44,000 jobs.

The unemployment rate ticked down to 4.9 percent in October, while the labor force participation rate ticked down to 62.8 percent—the same rate as in October 2013 despite downward pressure on participation from demographic trends. The U-6 rate, the broadest official measure of labor underutilization (and the only one still elevated relative to its pre-recession average) fell 0.2 percentage point in October. So far in 2016, nominal earnings for private-sector workers have increased at an annual rate of 3.1 percent, much faster than the pace of inflation (1.7 percent as of September, the most recent data available). 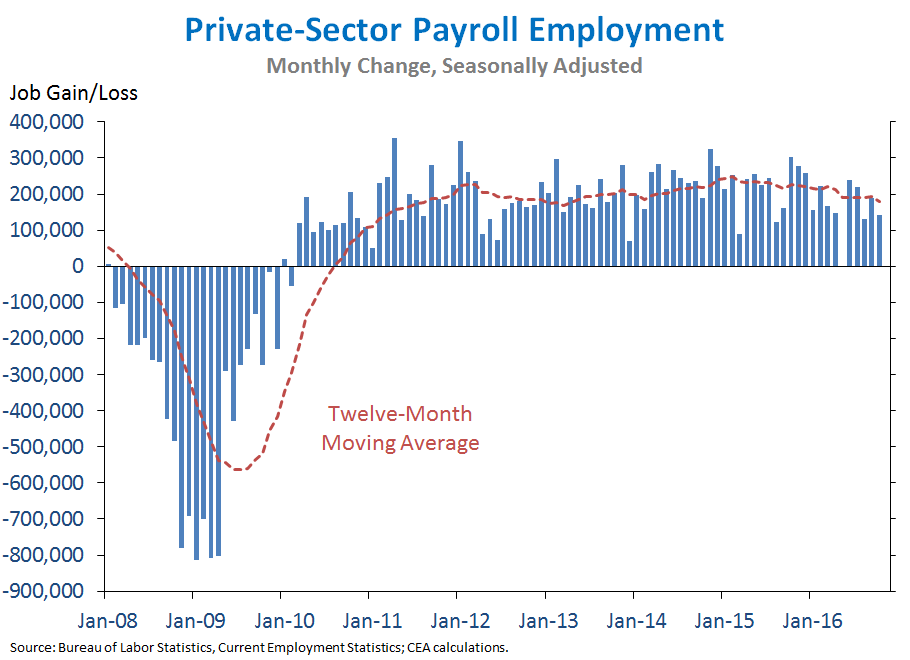 2. Average hourly earnings for all private workers increased 2.8 percent over the past year, the fastest twelve-month pace since the end of the recession. As the chart below shows, nominal wage growth has trended up over the course of the recovery as the labor market has continued to strengthen amid robust job growth. While inflation has picked up in recent months, nominal earnings have also continued to grow considerably faster than inflation, translating into sustained real wage gains for American workers. Real hourly wages have grown faster over the current business cycle than in any cycle since the early 1970s. Since the end of 2012, real wages have grown around 20 times faster than their pace of growth between the business cycle peak in 1980 and the business cycle peak in 2007, a sign of the considerable progress made by American families in the current recovery. 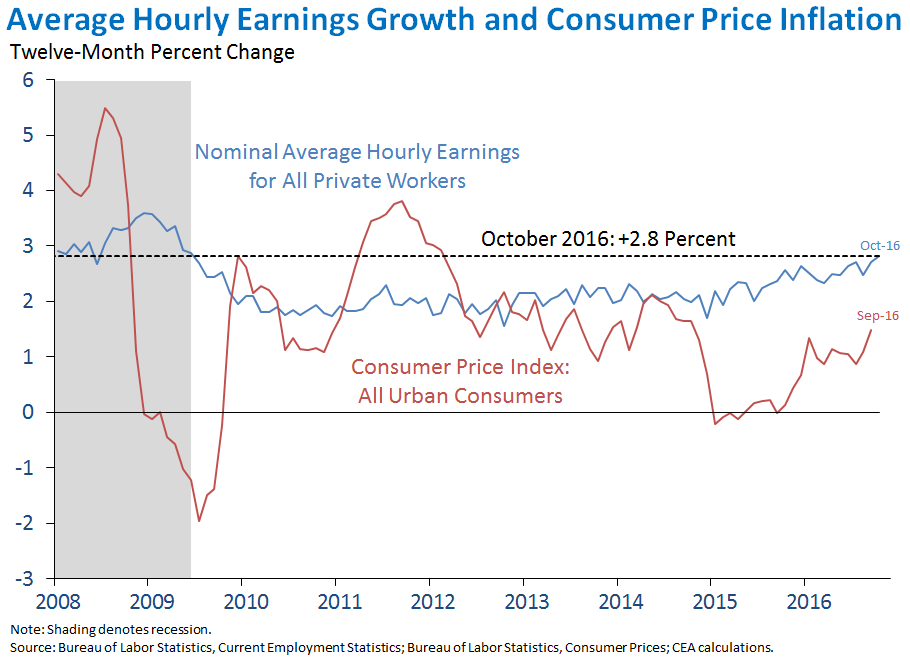 3. Amid rising real wages, the share of income going to labor has increased since 2014, though recent gains have not fully reversed a longer-run downward trend that may be partly due to decreased bargaining power for workers. The labor share of income reflects the portion of total economic output that is remitted to workers in the form of compensation. Changes in the labor share thus reflect changes in the relationship between workers’ productivity (the average real output produced by a worker in an hour) and their real hourly compensation. Recent increases in real wages have led to real compensation growth in excess of productivity growth, which has slowed across all major advanced economies in recent years. From the fourth quarter of 2012 to the third quarter of 2016, labor productivity in the nonfarm business sector has increased at a 0.7-percent annual rate, compared to an average annual increase of 1.0 percent in real compensation over the same period. Instead of coming fully out of additional output, this increase in real compensation has come partly out of profits, and, in part as a result, the share of income accruing to labor has been rising since mid-2014. Nevertheless, the labor share of income remains appreciably lower today than in 2000. While there are likely a number of reasons for this decline, a recent CEA issue brief discusses one possible cause: a general shift in bargaining power away from workers towards firms and an increase in employers exercising monopsony power (or market power sufficient for a buyer to set its own price) in the labor market. 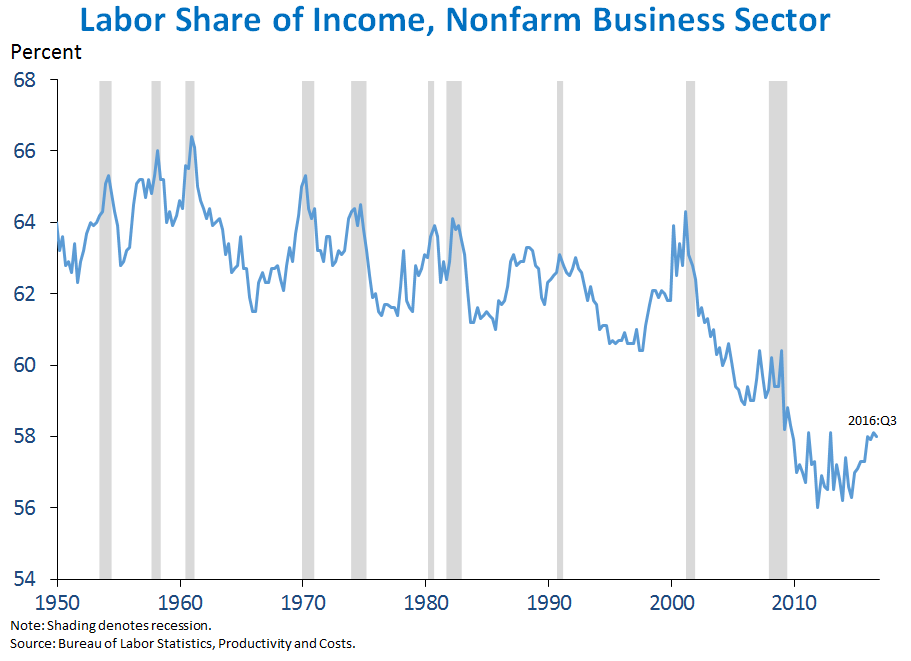 A key part of the Administration’s success in reducing veteran unemployment has been to protect the benefits earned by service members and veterans with programs like the Tuition Assistance Program and the Post-9/11 GI Bill. In 2011, First Lady Michelle Obama and Dr. Jill Biden launched Joining Forces, a nationwide initiative to support service members, veterans, and their families. Through Joining Forces, more than 50 companies have pledged to hire more than 110,000 veterans and military spouses over the next five years. As Veterans Day approaches on November 11, the Administration will take further steps to make sure veterans can get the most out of the education benefits that they have earned and to help veterans gain the skills and training that they need to succeed in the civilian workforce. 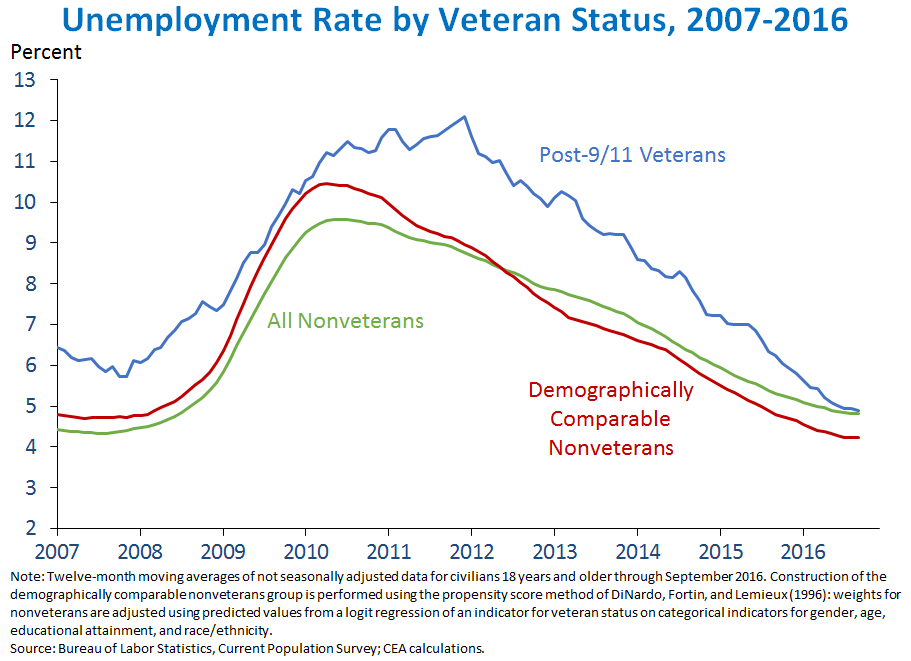 5. The distribution of job growth across industries in October was broadly consistent with the pattern over the past year. Above-average gains relative to the past year were seen in Federal government employment (+12,000), while mining and logging (which includes oil extraction) posted a smaller loss (-2,000) than in recent months amid moderation in oil prices. On the other hand, retail trade (-1,000) saw weaker-than-average growth. Slow global growth has continued to weigh on the manufacturing sector, which is more export-oriented than other industries and which posted a loss of 9,000 jobs in October. Across the 17 industries shown below, the correlation between the most recent one-month percent change and the average percent change over the last twelve months was 0.75, similar to the average correlation over the last two years. 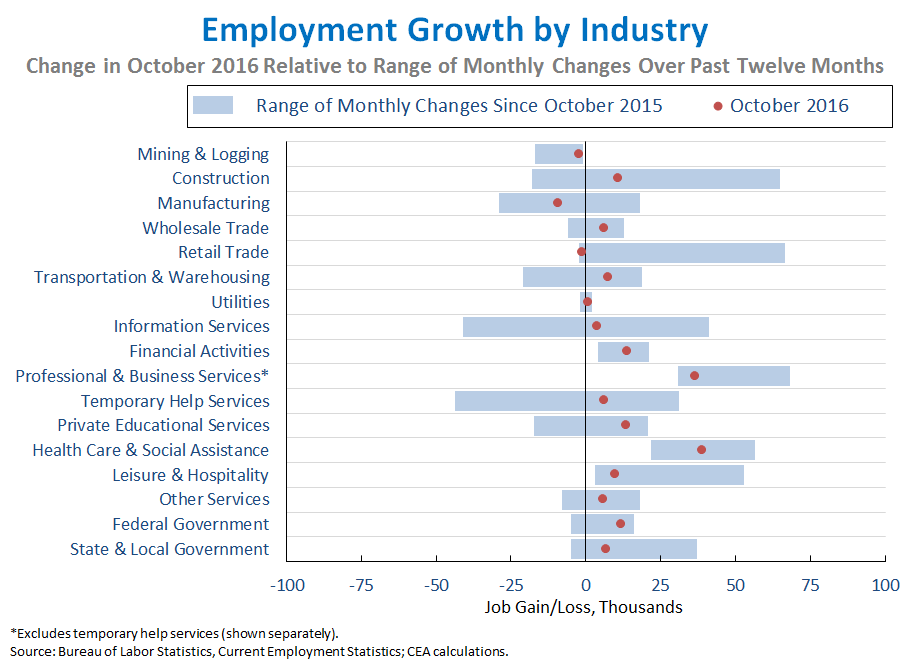