November 29, 2016 at 9:30 AM ET by Jason Furman
Twitter Facebook Email
Summary:
Real GDP grew 3.2 percent at an annual rate in the third quarter according to the second estimate released from the Bureau of Economic Analysis.

Third-quarter economic growth was revised up 0.3 percentage point to 3.2 percent at an annual rate, a noticeably faster pace than in the first half of the year. Exports, which have faced substantial headwinds in recent years from slow growth abroad, grew at an annual rate of 10.1 percent in the third quarter, boosted in part by transitory factors. Consumer spending continued to grow at a solid pace in the third quarter, while inventory investment (one of the most volatile components of GDP) boosted GDP growth after subtracting from it in the prior five quarters. Third-quarter growth in the most stable and persistent components of output—consumption and fixed investment—was revised up to 2.1 percent. Still, more work remains to strengthen economic growth and to ensure that it is broadly shared, including promoting greater competition across the economy; supporting innovation; increasing investments in infrastructure; and opening new markets to U.S. exports. 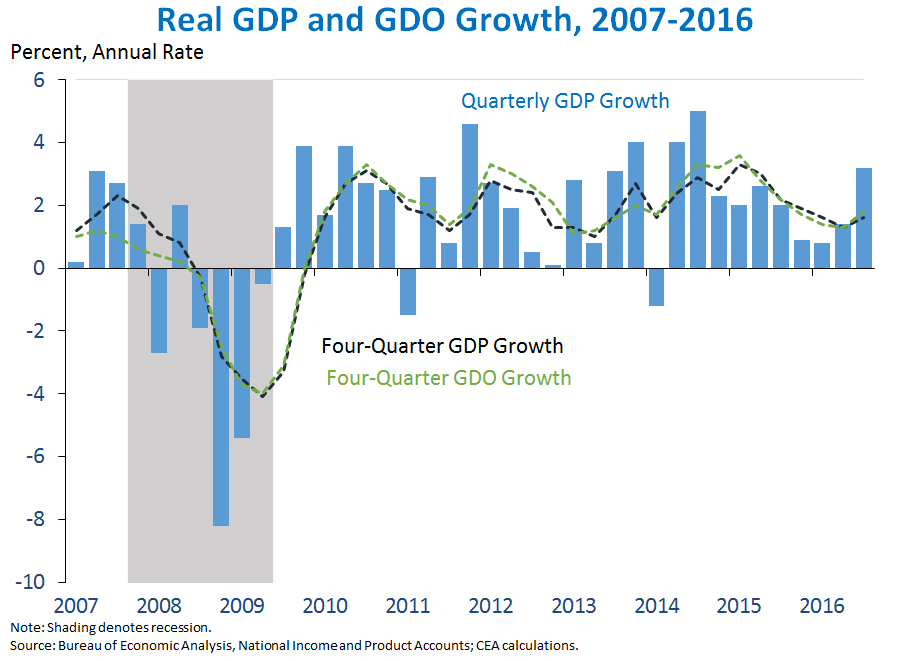 In addition to reporting its first estimate of third-quarter GDI and GDO in today’s release, BEA also revised up its estimate of real GDI growth in the second quarter of 2016 from -0.2 percent to 0.7 percent due to an upward revision to wages and salaries. This boosted second-quarter real GDO growth to 1.1 percent, a stronger pace than the previously reported 0.6 percent. 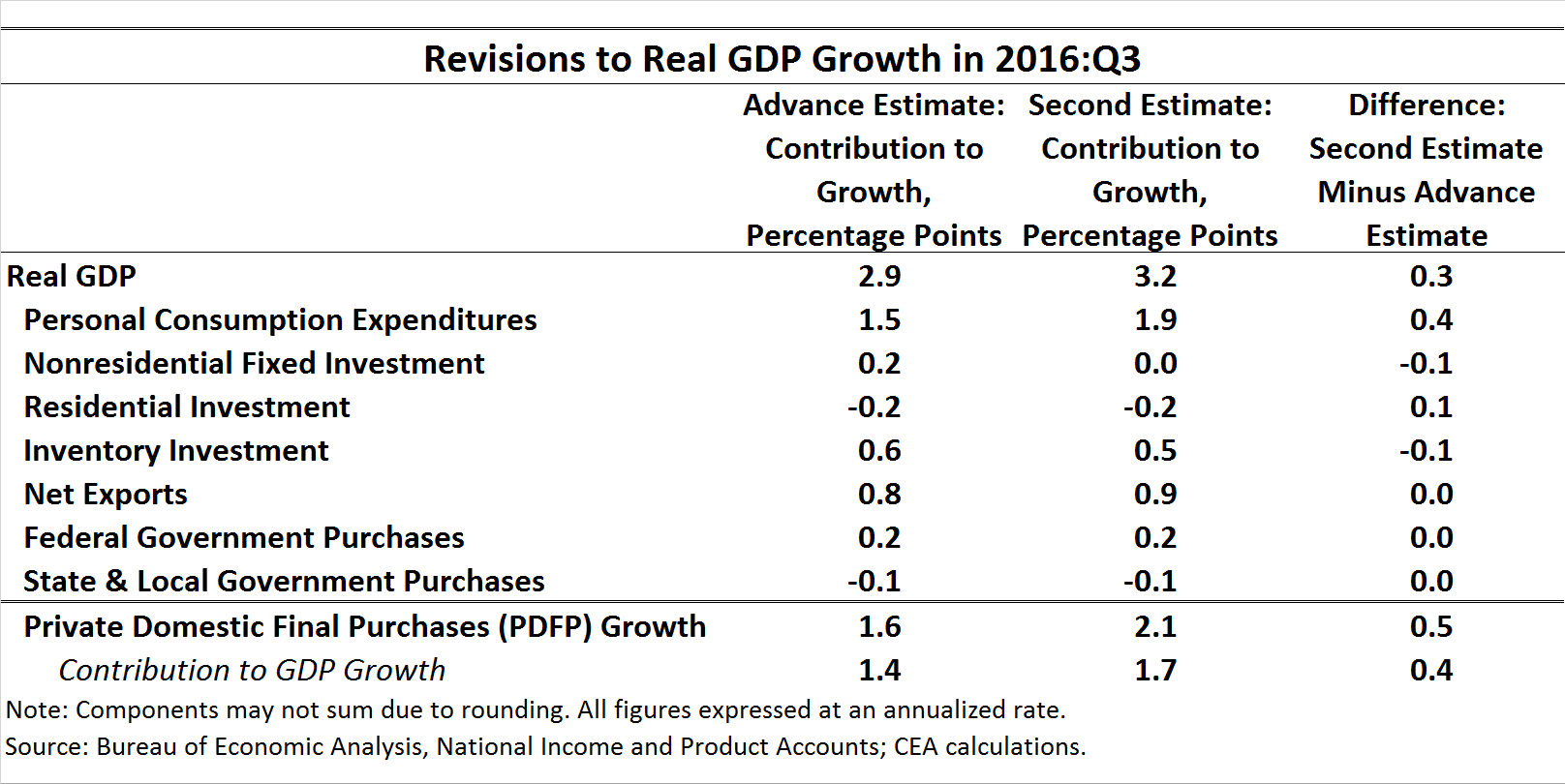 3. Strong consumer spending growth in recent quarters has been supported in part by improvements in household balance sheets, with household debt service as a share of disposable income at a historically low level. Consumer spending contributed 1.9 percentage points to total real GDP growth in the third quarter, with 0.8 percentage point attributable to durable goods spending. In recent years, durable goods spending has contributed disproportionately to consumer spending growth: although durable goods spending makes up only about one-tenth of total consumer spending, it has been responsible for about one-quarter of the growth in consumer spending since the beginning of 2014. This strength in part reflects improvements in household balance sheets since the recession, as spending on durables tends to be more sensitive to financial conditions than other types of consumer expenditures. As the chart below shows, household debt service—the fraction of disposable income that households must spend on interest and principal payments for their outstanding debt—has fallen sharply in recent years, driven both by low interest rates and by sharp reductions in the level of outstanding household debt, and is now close to its lowest level on record (with data going back to 1980). This improvement in balance sheets has left households with more disposable income available for consumer purchases, and—along with increases in real incomes—has helped to support strong consumer spending growth. 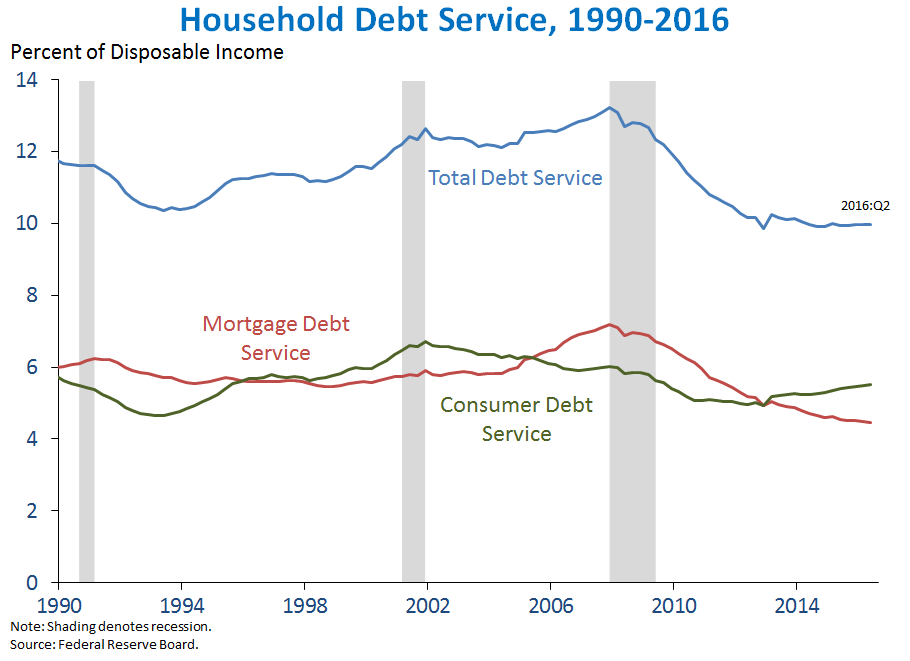 4. In part due to transitory factors, real exports contributed 1.2 percentage point to overall real GDP growth—their largest quarterly contribution since 2013—with goods exports providing the majority of the contribution. Exports of goods contributed 1.1 percentage point to overall real GDP growth in the third quarter, in part due to an unusually large increase in agricultural exports. Goods exports make up about two-thirds of total U.S. exports (with agricultural exports comprising around 5 percent of total exports) and the United States is the second-largest exporter of goods in the world according to data from the World Trade Organization (WTO). Although services exports have contributed less to overall GDP growth than goods exports in recent years, the level of U.S. services exports is high: according to WTO data, the United States is the world’s largest exporter of services, and the International Trade Administration (ITA) estimates that U.S. services exports support 4.8 million American jobs. Additionally, the division of exports into goods and services in today’s BEA release is based on final sales, and does not account for the value added by the services sector in each stage of the production process for export goods. ITA analysis finds that nearly half of the 6.8 million jobs supported by goods exports in 2014 were in the services sector. 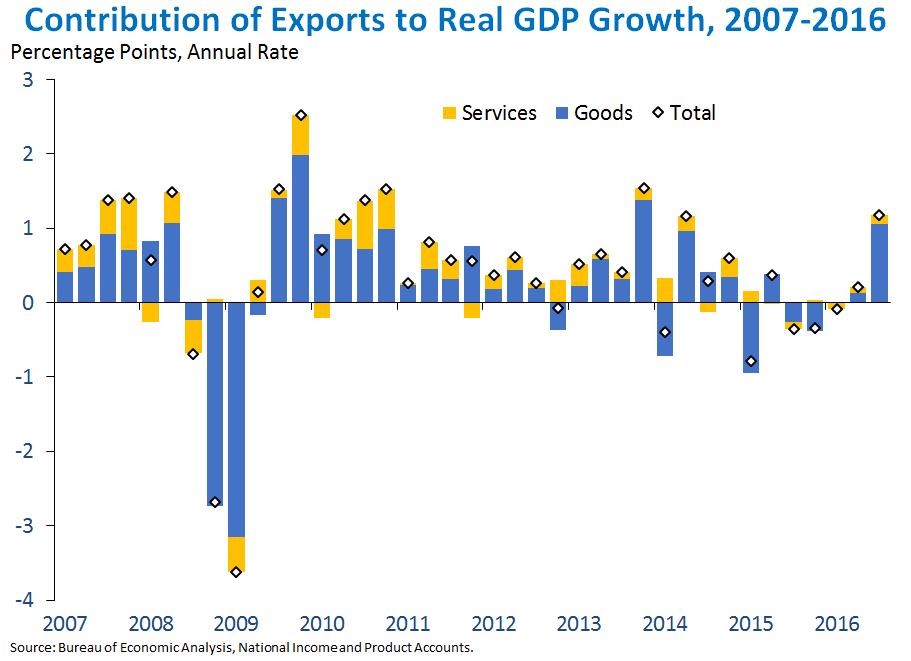 5. Real private domestic final purchases (PDFP)—the sum of consumption and fixed investment—rose 2.1 percent at an annual rate in the third quarter. PDFP—which excludes more volatile components of GDP like net exports and inventory investment, as well as government spending—is generally a more reliable indicator of next-quarter GDP growth than current GDP. In the third quarter, the divergence between overall real GDP growth and the relatively weaker contribution of PDFP to growth was largely accounted for by the large positive contributions of inventory investment and exports to real GDP growth. Overall, PDFP rose 2.0 percent over the past four quarters; this is above the pace of real GDP growth over the same period, as inventory investment has subtracted 0.4 percentage point from growth over the past four quarters. 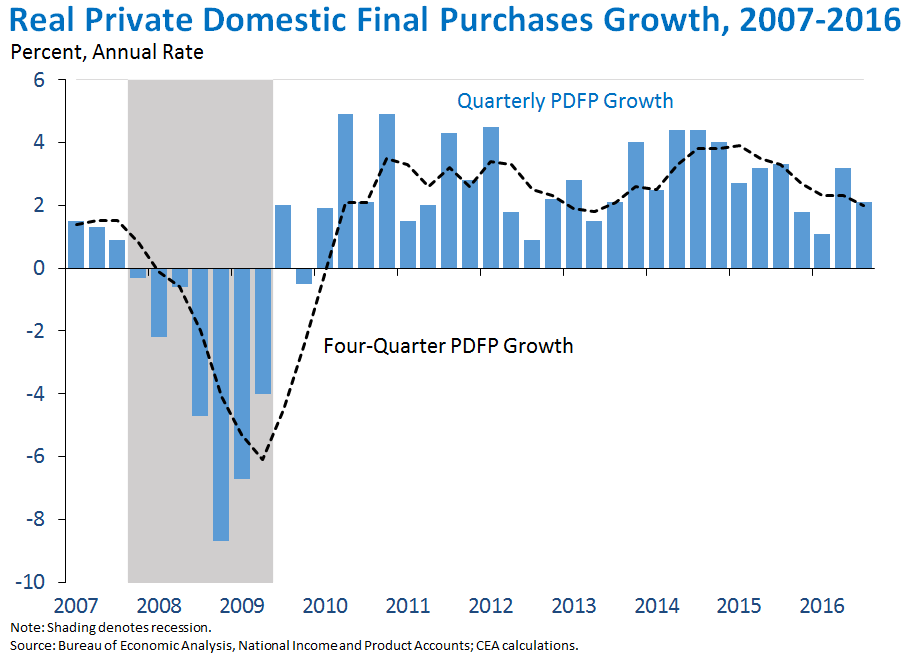