A Year of Action Supporting Computer Science for All

December 5, 2016 at 12:22 PM ET by Ruthe Farmer, Kumar Garg
Twitter Facebook Email
Summary:
Learn how 2016 has been a year of action in support of the President's Computer Science for All initiative and computer science education across the nation. 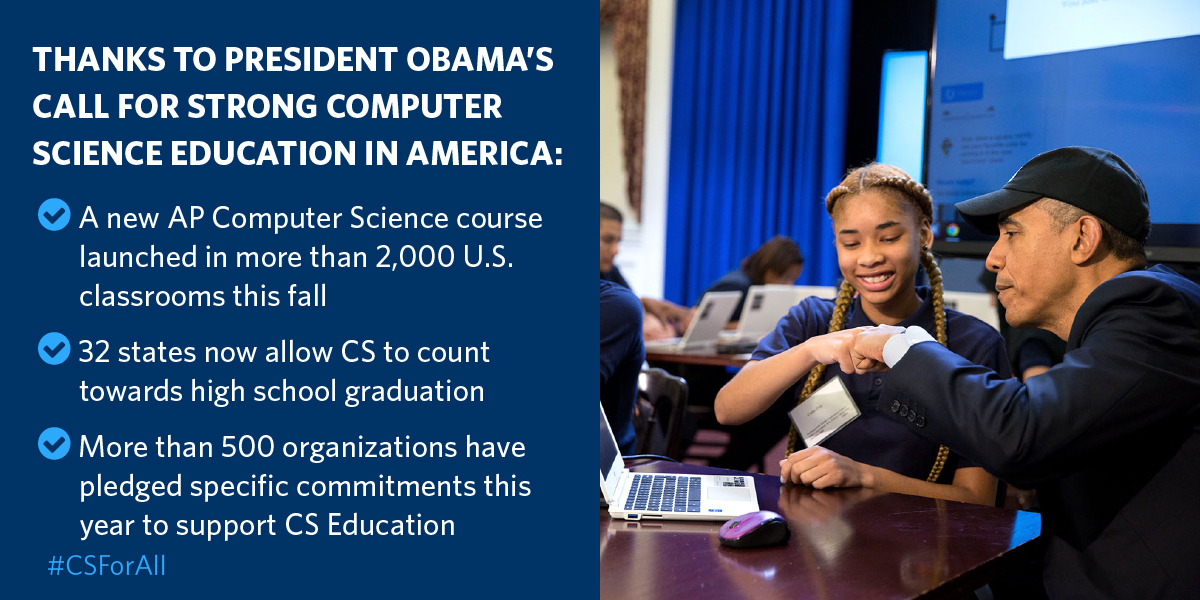 In President Obama’s final State of the Union Address, he issued a bold call to action to give every child the opportunity to learn computer science. He did so because computing is becoming increasingly relevant to America’s economy, cybersecurity, and national security.

He also thinks it’s a lot of fun!

Since then, 2016 has been a year of action in support of computer science, with new announcements made today. This year alone, 14 new states have expanded CS education, more than 500 organizations have responded to the President’s call to action, and a new AP-CS course launched this fall that is already being offered in more than 2,000 classrooms. In addition, 15 federal agencies are coordinating efforts to expand CS education, with new investments and guidance.

Learn more about all of today's announcements.

As a year of action 2016 builds on a decade of national, state, and grassroots activity to revitalize K-12 computer science education. A clear example of that steady growth and momentum has been Computer Science Education Week (CSEdWeek).

First launched in 2009 with a resolution in the U.S. House of Representatives, and timed in recognition of the birthday of computing pioneer and Medal of Freedom recipient Admiral Grace Murray Hopper, CSEdWeek has since grown into a global event celebrated worldwide where millions of students, educators, parents, and industry volunteers participate in events and activities to inform and educate students about computer science and career opportunities in technology.

In 2013, President Obama kicked off CSEdWeek with a video message urging students to try their hands at computer science saying, “don’t just play on your phone, program it.”

During CSEdWeek 2014, President Obama became the first President to write computer code as a part of a student coding activity at the White House, and last year the White House hosted the CS Tech Jam to bring developers, educators, and students together to develop new innovations for CS education.

This week, Obama administration officials, alongside hundreds of local and national organizations, are joining community-led CSEdWeek events across the nation, ranging from the Inland CSforAll Summit, which brings together school districts and community partners across central California, to the BotBall Junior tournament in Oklahoma City where 1,000 students will show off their software skills as they compete with autonomous robots, to the “Cuppa Code” meet-up for new CS teachers and tech professionals in Arlington, Virginia, hosted by CodeVA and Starbucks to the General Services Administration’s “Grace Hopper” Hackathon for open government.

Find an event in your community, and join the movement to bring computer science to all of our children!