December 22, 2016 at 9:30 AM ET by Jason Furman
Twitter Facebook Email
Summary:
Real GDP grew 3.5 percent at an annual rate in the third quarter, with the U.S. economy now 11.6 percent larger than at its peak before the crisis.

Third-quarter economic growth was revised up 0.3 percentage point to 3.5 percent at an annual rate, the fastest quarterly growth since 2014. The U.S. economy is now 11.6 percent larger than its pre-crisis peak in 2007 amid its strong recovery since the worst economic crisis since the Great Depression. Rising incomes, improved household balance sheets, and high levels of consumer confidence have supported robust consumer spending growth over the recovery. Meanwhile, the housing sector has continued to recover from the crisis and shows further potential for expansion. However, economic growth has faced a number of headwinds in the current recovery, including contractions in State and local government spending, weak foreign growth (which has weighed on both exports and investment), and the demographic effects of the aging U.S. population. More work remains to further strengthen growth and to ensure that it is broadly shared, including promoting greater competition across the economy; supporting innovation; increasing investments in infrastructure; and opening new markets to U.S. exports.

The 0.3-p.p. upward revision to GDP growth was more than accounted for by upward revisions to consumer spending, business fixed investment, and State and local government spending. However, the overall contour of third-quarter growth was largely unchanged from last month’s second estimate. 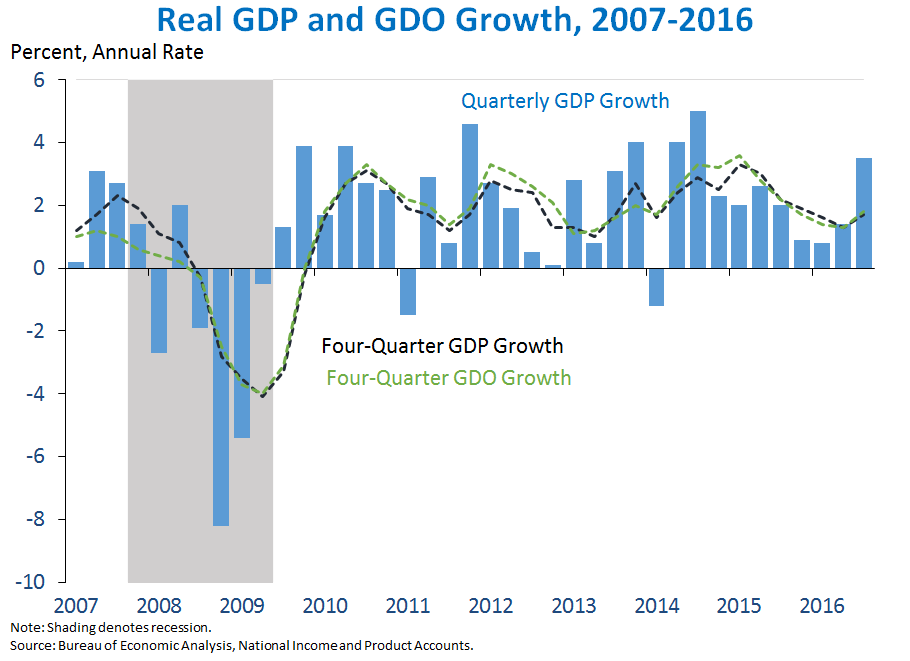 2. Strong consumer spending growth over the current recovery has been supported by growth in real incomes, improvements in household balance sheets, and high levels of consumer confidence. Consumer spending accounts for over two-thirds of GDP, and has contributed disproportionately to overall real GDP growth in recent years. This strength in domestic demand reflects improved economic conditions for American households across a wide range of measures. Real wages have grown faster over the current business cycle than in any since the early 1970s (measured peak to peak), and from 2014 to 2015 real median household income increased 5.2 percent, the fastest growth on record. Meanwhile, as a share of disposable income, household debt service—the amount that households must spend on interest and principal payments for their outstanding debt—has fallen sharply in recent years, driven both by low interest rates and by sharp reductions in outstanding household debt relative to income. Taken together, these factors have left households with more disposable income available for consumer purchases. Finally, consumers have been increasingly confident in recent years. As the chart below shows, the University of Michigan index of consumer sentiment—which tends to closely track real consumer spending growth—is close to its highest level in ten years. 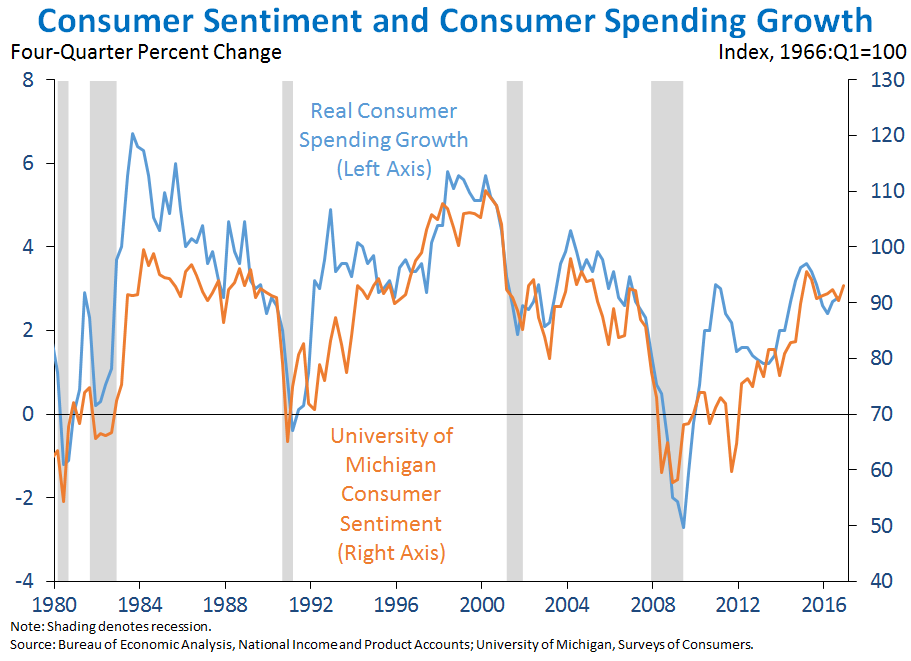 3. The recent slowdown in real business fixed investment growth can be explained largely by changes in the rate of U.S. and foreign GDP growth, as discussed in Chapter 2 of the 2017 Economic Report of the President. While business fixed investment—private spending on structures and equipment, as well as expenditures on intellectual property products such as software and research and development (R&D)—constitutes just 12 percent of GDP, it is crucial to long-run growth because it provides workers with more capital and improves technology, thus contributing to productivity growth. Business fixed investment growth has slowed since 2014; while oil-related investment has dragged on overall investment growth due to low oil prices, non-oil related investment growth has slowed somewhat as well. CEA analysis finds that much of the slowdown in investment growth can be explained using an “accelerator model,” which assumes that businesses invest if they expect rising demand growth for their products, meaning that rising GDP growth rates will lead to faster investment growth. The analysis also finds that several factors that have historically impacted investment growth—including credit constraints and other financial stress—have little explanatory power in understanding the recent slowdown. However, because the model predicts that investment follows changes in the rate of GDP growth, it predicts a rebound in the future, since U.S. and global output growth are expected to stabilize or pick up slightly in the years ahead. 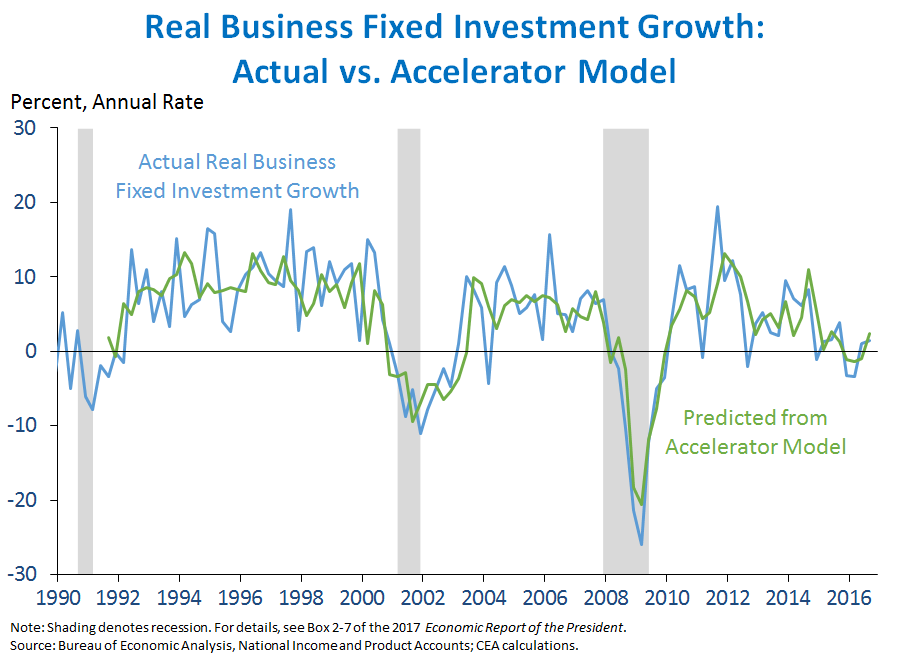 4. Ten years after the first signs of decline in the U.S. housing market, housing activity and investment have gradually recovered, with room for future expansion. Recovery in the housing sector has been supported by strong job growth, rising real wages, and low mortgage rates, with growth in real residential investment outpacing overall real GDP growth over the course of the recovery from the Great Recession. Even with the solid growth in recent years, there is room for further expansion in residential construction. As the chart below shows, housing starts remain well below the level needed to keep pace with population growth, household formation, and typical rates of housing stock replacement. CEA analysis suggests that excess housing supply from overbuilding during the 2000s has been more than offset by underbuilding in recent years. Low household formation, particularly among young adults, may be playing a role in reducing demand for housing. On the supply side, local barriers to housing development in high-demand areas may also be one factor holding back new residential construction. Still, residential investment has further room to grow in future quarters, presenting upside potential for domestic demand in the near-to-medium term. 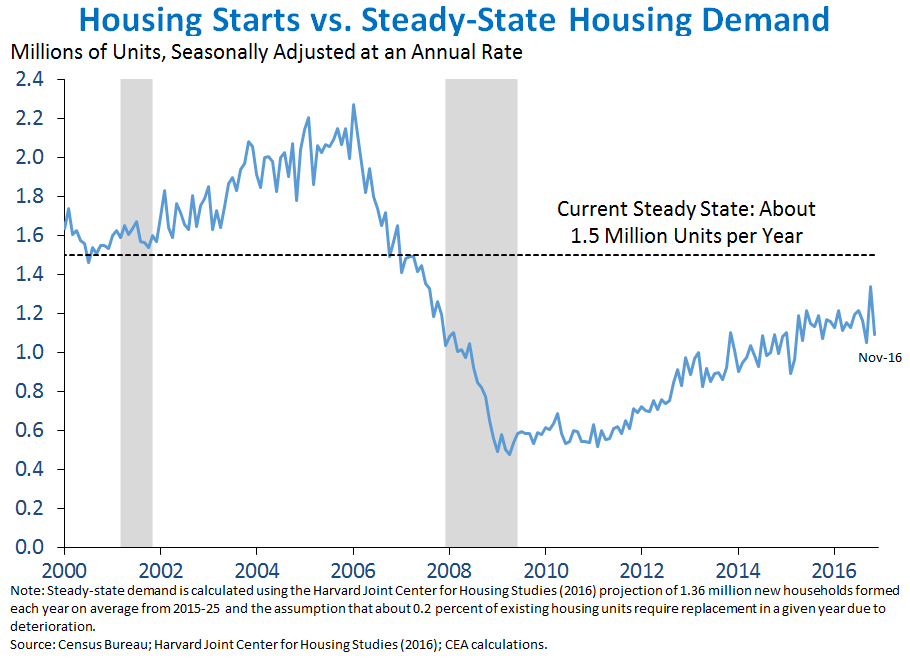 6. Growth in U.S. exports closely tracks global demand, with slowing global growth creating key headwinds to U.S. growth in recent years. The volume of U.S. exports to foreign countries is sensitive to foreign GDP growth, and, as shown in the chart below, four-quarter foreign GDP growth—when weighting countries by their relative importance to U.S. trade—explains much of the variance in U.S. export growth. Over the last five years, global growth has consistently underperformed relative to forecasts, and in its October World Economic Outlook, the International Monetary Fund (IMF) revised down its forecast of global growth for the four quarters of 2016. Still, the IMF currently forecasts global growth to pick up in 2017, suggesting less downward pressure on U.S. export growth—and on the manufacturing sector, which tends to be more export-oriented than other industries—from weak foreign demand going forward. 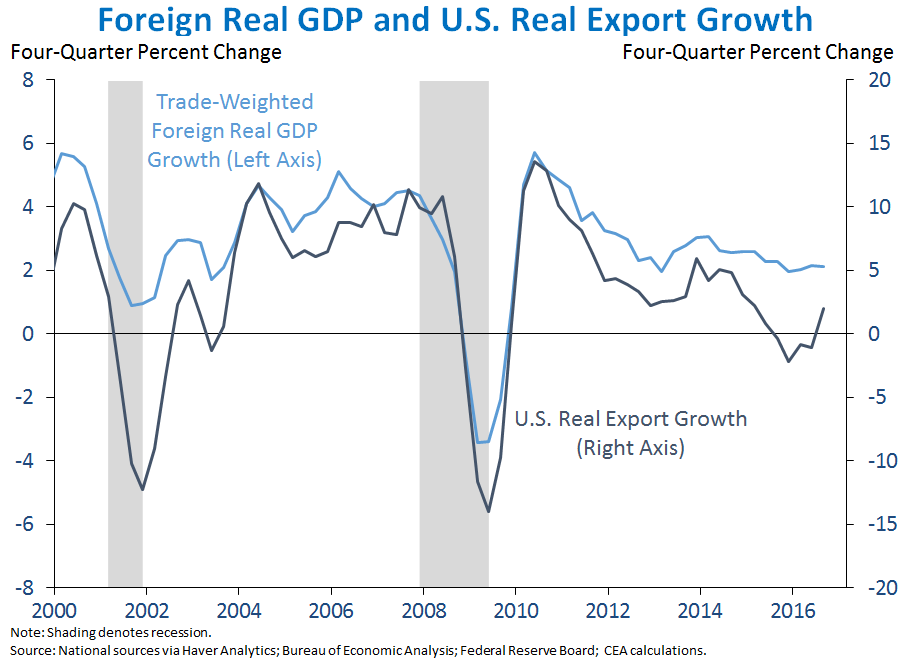 7. The aging of the U.S. population, a trend that will continue in the coming years, has placed constraints on growth in potential real GDP. The growth of the working-age (15-64) population in the United States has slowed notably in recent decades, putting downward pressure on labor force participation and real GDP growth. The working-age population grew 1.4 percent at an annual rate in the 1960s through the 1980s, but just 0.6 percent during the current business cycle. (The rate of growth of the prime-age [25-54] population has declined even more steeply, and the prime-age population even contracted between 2012 and 2015.) The decline in the growth rate of the working-age population is expected to continue through 2028, suggesting continued demographic headwinds to overall growth for at least the next decade. As noted in Chapter 2 of the 2017 Economic Report of the President, research has found that demographic shifts towards an older workforce may have also reduced productivity growth in recent years, though projections of the composition of the labor force suggest that the drag on productivity from demographics may soon abate. Still, slowing productivity growth remains a key structural challenge that the United States shares with all other major advanced economies. 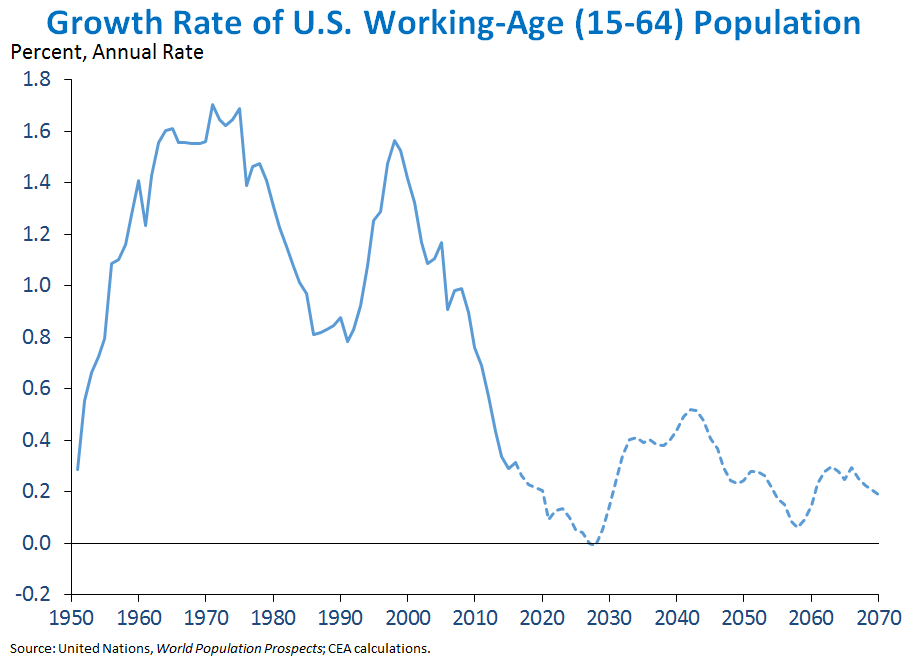