What I’m Hearing from You Through Advise the Advisor

February 16, 2011 at 11:48 AM ET by David Plouffe
Twitter Facebook Email
Summary:
David Plouffe, Senior Advisor to the President, responds to some of your Advise the Advisor feedback. 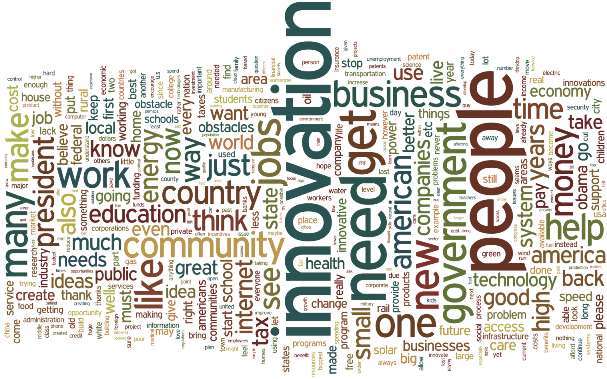 A word cloud of feedback from the Advise the Advisor program gives greater prominence to words that appear more frequently in your feedback (by Wordle.net)

Last week, I kicked off the new Advise the Advisor series on WhiteHouse.gov and asked for your ideas, comments and questions about how American innovation is affecting your communities and what we can do to remove obstacles to innovation.

Since then, thousands of you submitted comments and ideas over the course of the week. A team of people here at the White House reviewed every single submission.

We’ll post a more comprehensive analysis of your feedback in the coming days, but in the meantime, I want to highlight and respond to a couple of the common themes that we found in reading your feedback.

Education is the Key to Innovation

Many of you told me that one of the biggest obstacles to innovation is lack of high-quality education.

Education is the key to innovation and manufacturing superiority.  We must prepare all age groups…for the challenges this year and this decade.

Tony, the President couldn’t agree with you more.  In fact, President Obama spoke about this earlier this week at Parkville Middle School outside of Baltimore. In his FY2012 Budget proposal, the President has called for critical investments in our children’s future – like training 100,000 new math and science teachers over the next ten years, expanding the Race to the Top education reform initiative, and making college more affordable for America’s students and families by helping 9 million students through the Pell grant program and permanently extending the American Opportunity Tax Credit that provides up to $10,000 of tuition tax credits over four years.

Many of you, particularly those living in rural areas, told me that the lack of affordable access to high-speed Internet was slowing the pace of innovation in your community.

The single greatest thing we can do is connect rural America to the rest of the world via high speed Internet to allow the flow of information, and new business structures to grow 60 and 70 years ago it was roads and bridges that were the vital infrastructure, today it is that connection to information, a simple dial up makes it impossible or at least extremely difficult to find out basic information.

James is right, access to high-speed Internet is critical in the 21st century.  Last week, President Obama launched the National Wireless Initiative – a plan to expand wireless coverage to 98% of Americans so that small businesses can sell their products anywhere in the world and individuals can access the information and ideas they need to compete in the 21st century economy. As part of this initiative, the Administration will invest in research and development of emerging wireless technologies and applications so our nation stays at the cutting edge of internet technology. And we will establish a national wireless network for our public safety agencies.

All told, by more effectively utilizing spectrum, the President’s wireless initiative will make these investments while also reduce the budget deficit by nearly $10 billion. Check out the White House White Board video with Austan Goolsbee, Chairman of the Council of Economic Advisors to learn more about it.

Government Can Be an Obstacle to Innovation

Another common theme was that government itself can be an obstacle to innovation.  Many respondents felt that too much government regulation stifled businesses and innovators and that the patent process and intellectual property laws are broken.

The largest obstacle to continued innovation is not a secret; it is government intrusion into every aspect of American business. Startup companies are limited to those who have lots of capital to pay for legal advice. The average person cannot start a business on his own today. There are just too many regulations to get a loan. Too many hoops to get a license to operate that business and too much paper work to continue to employ workers.

In his State of the Union Address, the President called for a government-wide review of regulations to find and fix those regulations that place unnecessary burdens on businesses.  Indeed, in his Budget, the President put forward a set of common sense reforms to our patent system that will make it easier for innovators to move ideas to market and foster growth.

But there are some commonsense measures that are necessary to protect the health, wellbeing and safety of the American people. So while we work to eliminate those regulations that unnecessarily stand in the way of America’s entrepreneurs and job creators, we have to enforce safeguards like the Clean Air Act that protects the air we breathe, quality standards that ensure that our food is safe to eat, and guidelines that guarantee our water is safe to drink.

Many of you told me that clean energy innovation and energy efficiency was already shaping your communities.

I live in Iowa.  Recently I had to drive from Sioux City to Cedar Rapids.  It's been about 5 years since I've made the trip.  While cruising down the interstate I was amazed at how the landscape had changed.  Windmills - hundreds of windmills.  It was almost majestic.  I also noted all the semi's cruising down the highway with windmill parts.

President Obama is committed to helping to jumpstart a new clean energy economy here in the United State because the nation that harnesses the power of clean, renewable energy will lead the 21st century. The President’s FY2012 Budget proposal calls for America to produce 80% of our electricity from clean energy sources by 2035 and increases investments in renewable energy research and development.  Meeting that target will position the United States as a global leader in developing and manufacturing cutting-edge clean energy technologies. It will ensure continued growth in the renewable energy sector, building on the progress made in recent years. And it will spur innovation and investment in our nation’s energy infrastructure, catalyzing economic growth and creating American jobs.

You can learn more about the investments we’re making in clean energy and energy efficiency here.

I also heard a lot about some of the obstacles to innovation that many people see in their own communities, and that’s great feedback as we think about our policies to promote innovation going forward.

Innovation does not affect my community because it doesn't exist here.  The reason it does not exist is strictly because of the obstacles.  While decisions made in Washington may sound good or look good on paper, it has no bearing on my community.

Ron – that’s fair concern.  I know that especially during these tough economic times, it can be difficult to see progress.

The President’s plan to win the future by out-innovating, out-educating and out-building the rest of the world will bring innovation to parts of the country that can sometimes be left behind – whether that’s bringing high speed wireless to 98% of the country and bringing high speed rail 80% of Americans, or helping industries of the future like clean energy get a foothold in rural America.

We’re working to lay the groundwork for economic growth and innovation by rebuilding America’s infrastructure to ensure that America is the best place to do business in the world, reforming our education system to ensure that today’s students are well equipped for the jobs of tomorrow, and streamlining regulations to remove burdens on job creation. But government can’t do it alone.  We need businesses to step up and invest in America as well. In his speech at the Chamber of Commerce last week, the President spoke to business leaders about our shared responsibility to rebuild the American economy, calling on the business community to make investments in America that will pay dividends for both the American economy and their bottom lines.

I've passed along a portion of the ideas we received to Gene Sperling and his colleagues at the National Economic Council for further review and in the days and weeks ahead I hope to review even more of your feedback and incorporate the best ideas into my own advice to President Obama.  We're also planning for the next round of Advise the Advisor -- stay tuned for more on that.