October 20, 2011 at 7:35 PM ET by Nikki Sutton
Twitter Facebook Email
Summary:
President Obama laid out a plan to pay for the American Jobs Act so we can get people back to work and invest in an economy that lasts without adding to the Nation's deficit. 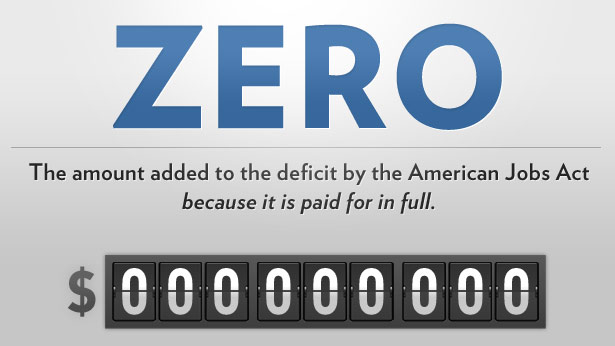 Over the last few days, President Obama traveled through small towns and communities on the American Jobs Act Bus Tour, talking with folks about how the American Jobs Act will fuel economic growth, get people back to work and put more money in the pockets of those who are working without adding to our deficit.

By rebuilding America's infrastructure, modernizing America's schools, providing tax credit incentives for hiring veterans and more, the American Jobs Act will begin creating jobs right away, if Congress answers the President's call to pass each piece of the bill. That is why we're featuring numbers that highlight how sections of the bill will impact you. Today's number is zero -- the amount added to the deficit by the American Jobs Act, because it is paid for in full.

As the President has said, we can invest in our long term prosperity without adding to the deficit:

I laid out a plan to pay for the American Jobs Act, and then some -- a plan that not only pays for the bill to put folks back to work to raise our growth rate, but to also pay down more of our debt over time.  It builds on the $1 trillion in spending cuts that I already signed this summer, making it one of the biggest spending cuts in history.

So, look, I believe we’ve got to make cuts in programs that don’t work and things that aren’t helping the economy grow so we can pay for the things that are.  Right?  We all believe that a government needs to live within its means.  We all agree with that.  But we also believe that how you bring down the deficit is important.  If we want to actually close the deficit -- not just talk about closing the deficit, not just using it for a campaign slogan, not just playing politics -- if we want to actually close the deficit, then you’ve got to combine the tough cuts with a strategy to ask the wealthiest Americans and the biggest corporations to do their part, to pay their fair share.

Asking millionaires and billionaires to contribute their fair share will make the additional deficit reduction necessary to meet the President’s goal of stabilizing our debt as a share of the economy and pay for his plan to put Americans back to work.