February 13, 2013 at 10:49 AM ET by Kori Schulman
Twitter Facebook Email
Summary:
On Thursday, February 14th at 4:50 p.m. EST, tune in for a virtual post-State of the Union interview with the President during a Google+ Hangout.

On Thursday, February 14th at 4:50 p.m. EST, President Obama will sit down with Americans from all across the country for a “Fireside Hangout” – our 21st century take on Franklin D. Roosevelt’s fireside chats. The President will join a live, completely virtual interview from nowhere other than the Roosevelt Room in the White House’s West Wing.

This online event comes just days after the State of the Union address, where the President laid out his plan to create jobs and strengthen the middle class. During the hangout, which is hosted and moderated by Google, the President will connect with people who are active online to discuss the policies and proposals in the speech.

Do you have a question that you’d like President Obama to answer? Right now, you can submit a text or video question for the President, and also vote on your favorites. Then, be sure to tune in for the hangout live on Thursday, February 14th at 4:50 p.m. EST. Watch it live on the White House YouTube Channel, Google+ page and at WhiteHouse.gov/live. 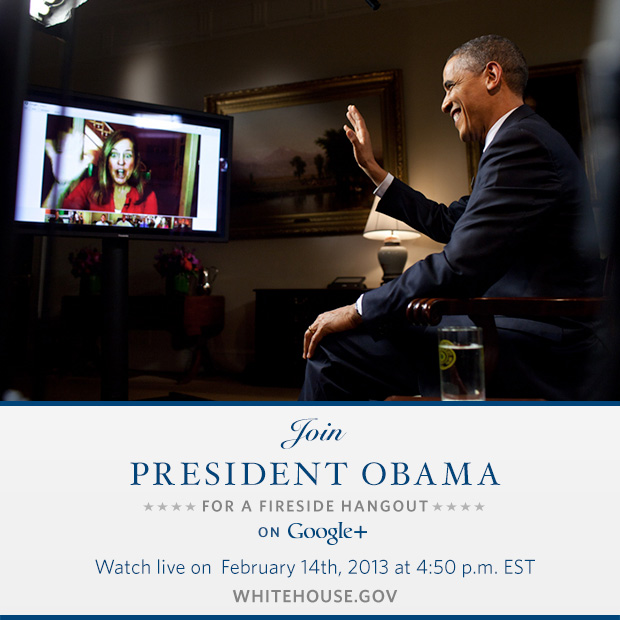 Thursday’s event with the President is the latest in a series of Fireside Hangouts and White House engagement programs on Google+. Last month, Vice President Biden kicked off the series with a virtual conversation about reducing gun violence. And after President Obama presented his plan to fix our broken immigration system, Cecilia Muñoz, Director of the Domestic Policy Council, joined a Fireside Hangout on the issue.

The White House uses Google+, and other social media networks and online tools, to directly connect President Obama and his Administration directly with the American people. Since our inaugural White House hangout with President Obama after the State of the Union in January 2012, the White House has hosted hangouts about everything from healthy families to small business and mortgage refinancing to human trafficking.