March 4, 2013 at 1:26 PM ET by Megan Slack
Twitter Facebook Email
Summary:
President Obama announces his nominees for director of the Office of Management and Budget, Secretary of Energy and administrator of the EPA. 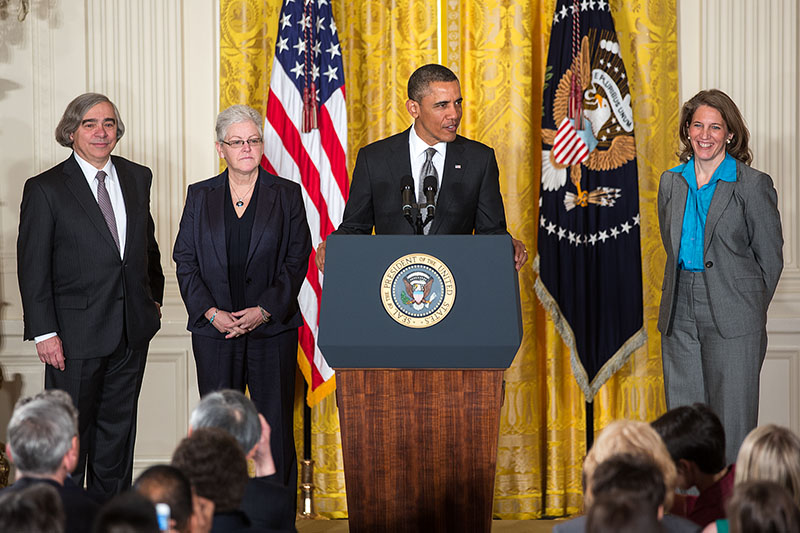 President Barack Obama announces the nominations of, from left, Ernest Moniz as Energy Secretary, Gina McCarthy as Environmental Protection Agency Administrator, and Sylvia Mathews Burwell as Director of the Office of Management and Budget, in the East Room of the White House, March 4, 2013. (Official White House Photo by Lawrence Jackson)

Today, President Obama announced his nominees for director of the Office of Management and Budget, Secretary of Energy and administrator of the EPA.

President Obama said that Burwell "understands that our goal when we put together a budget is not just to make the numbers add up. Our goal is also to reignite the true engine of economic growth in this country, and that is a strong and growing middle class -- to offer ladders of opportunity for anybody willing to climb them."

Those goals are especially important to remember now, "as we continue to try and find a way forward in light of the budget cuts that are already starting to cost us jobs and hurt our economy," he said.

The President also announced two nominees who will help build on the work his Administration has already done to control our energy future, while reducing the pollution that contributes to climate change: Ernie Moniz, who will replace Steven Chu as Secretary of Energy and Gina McCarthy to replace Lisa Jackson as administrator of the EPA.