April 24, 2013 at 3:37 PM ET by R. Gil Kerlikowske
Twitter Facebook Email
Summary:
The Obama Administration's new 21st century drug policy outlines a series of evidence-based reforms that treat our nation’s drug problem as a public health issue, not just a criminal justice issue. This policy underscores what we all know to be true: we cannot arrest or incarcerate our way out of the drug problem.

Editor's Note: This blog post is cross-posted from the ONDCP Blog.

The President has outlined his vision of an America built to last—where an educated, skilled workforce has the knowledge, energy and expertise to compete in the global marketplace. Yet--for far too many Americans--that vision is limited by drug use, which not only diminishes the potential of the individual, but jeopardizes families, communities and neighborhoods.

The economic costs of drug use are enormous: In 2007 alone, illicit drug use cost taxpayers more than $193 billion in lost productivity, healthcare, and criminal justice costs. But the human costs are worse. Nationwide, drug-induced overdose deaths now surpass homicides and car crashes as the leading cause of injury death in America.

We are not powerless to address these challenges. And as recent data has shown, we are not unable to reverse these trends. Prescription drug abuse is beginning to decline. Cocaine use and related overdoses are dropping. And recent data show the nation’s prison and jail population dropping for the third straight year.

Today we are releasing a science-driven plan for drug policy reform in America to build upon this progress. This 21st century drug policy outlines a series of evidence-based reforms that treat our nation’s drug problem as a public health issue, not just a criminal justice issue. This policy underscores what we all know to be true: we cannot arrest or incarcerate our way out of the drug problem. 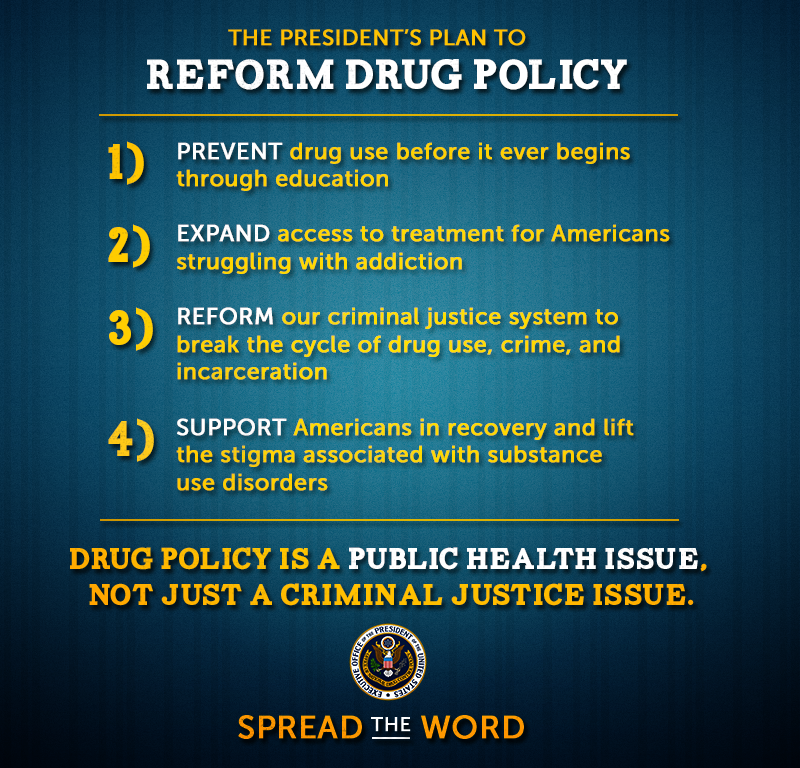 America’s 21st century approach to drug policy is built on decades of research demonstrating that addiction is a disease of the brain—one that can be prevented, treated, and from which people can recover. The 2013 Strategy reflects this understanding by emphasizing prevention and treatment programs over incarceration, by replacing “tough on crime” with “smart on crime” and by making access to treatment a reality for millions of Americans. In fact, the President’s 2014 budget requests $1.5 billion more for treatment and prevention programs compared to 2012 – the largest requested increase in at least two decades.

Drug policy is not about leaving Americans to fend for themselves. It’s about helping women with substance use disorders get access to prenatal care so their children can get a healthy start in life. It’s about showing teenagers a healthy path to adulthood so they can succeed as productive members of society with the skills they need to compete in the 21st century. It’s about giving a person who struggles with addiction an opportunity to go to treatment and receive support in recovery. It’s about the historic expansion of mental health and addiction treatment to 62 million Americans who need help provided by the Affordable Care Act.

This is what drug policy reform looks like, and that’s what is in the Strategy we are releasing today.