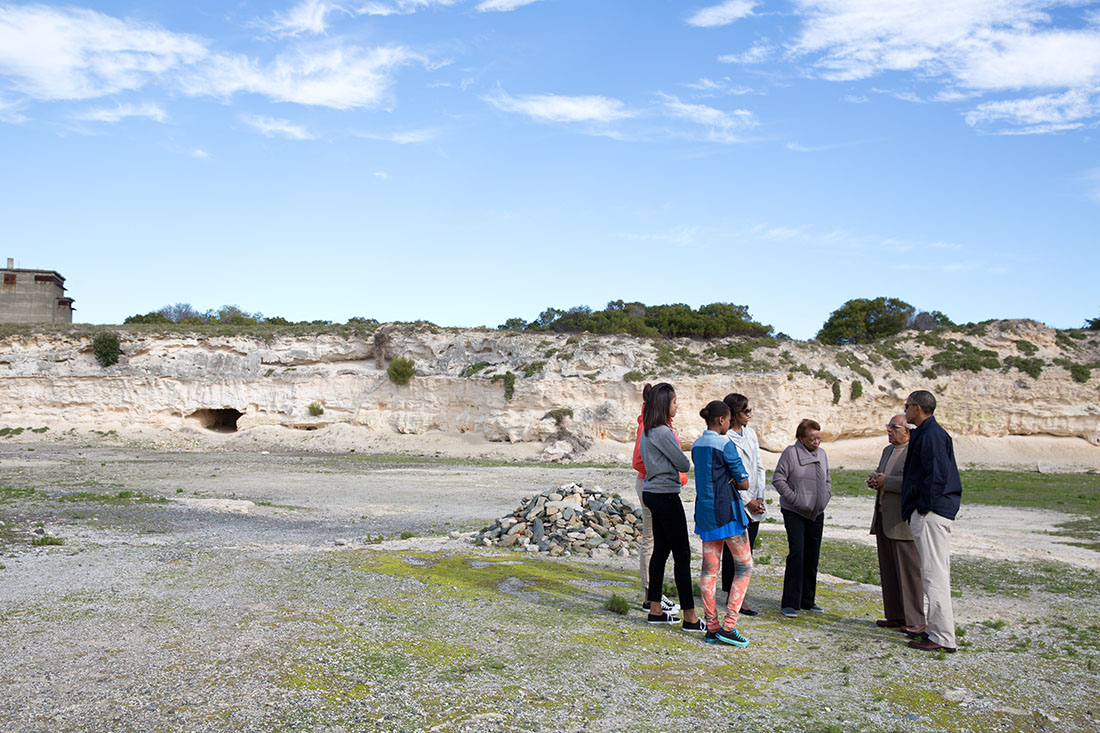 Today, our family visited Robben Island for an experience we will never forget. Robben Island is located off the coast of South Africa, and from the 1960s through the 1990s, this Island housed a maximum security prison. Many of the prisoners there – including the guide for our visit, a man named Ahmed Mohamed Kathrada – were activists who worked to bring down Apartheid, the South African government’s policies that discriminated against people of color.  Under Apartheid, people of different races were separated in nearly every part of South African society.  They were forced to attend separate schools, live in separate neighborhoods, even swim at separate beaches – and in nearly every case, the neighborhoods, schools and other facilities for black people were much worse than the ones for white people.

Among those imprisoned at Robben Island for fighting Apartheid were three men who went on to become President of South Africa: Nelson Mandela, Kgalema Motlanthe and the current president, Jacob Zuma.

So today, as we toured the island, I couldn’t help but think about how this place must have shaped these leaders.  Put yourself in their shoes – all they were doing was fighting to ensure that people in South Africa would be treated equally, no matter what the color of their skin.  And for that, they wound up confined on this remote island, far removed from the world they so desperately hoped to change.

During our visit, we toured the rock quarry where they spent their days doing backbreaking labor, crushing and lifting heavy rocks in the blinding sun.  We also saw the tiny cells – including Mr. Kathrada’s cell – where they spent their nights.  It was amazing to see Mandela’s cell, a tiny room – about 6 feet wide – where he spent 18 of the 27 years he was in prison.  He slept on a thin mat on the floor, and when he stretched out to sleep at night, his toes touched one wall, while his head grazed the other.  The walls were two feet thick with no decorations, and he was given a bucket to use as a toilet.

In his first few years on the island, Mandela wasn’t allowed to read the newspaper, listen to the radio, or even have a clock to keep the time.  Meals consisted of small rations of porridge – and every other day, he received a tiny piece of meat, but it was mainly gristle.  When his mother and son passed away, he couldn’t attend their funerals.  And at one point, a prison guard left a news clipping in Mandela’s cell – an article about the government’s mistreatment of his wife – just to taunt him.

Yet despite these conditions, Mandela and his fellow prisoners never lost hope.  As Mandela once said, “Prison – far from breaking our spirits – made us more determined to continue with this battle until victory was won.”  They did their best to get an education while in prison – they read as many books as they could, and some prisoners even got university degrees through correspondence courses.  They vigorously debated philosophy, politics, and the direction of the anti-Apartheid movement.  They stood up to mistreatment by the prison guards. And they found ways to communicate in secret, such as stuffing notes inside tennis balls that they would pass along during recreation periods.

So when these prisoners were finally released, their spirits were far from broken.  Mandela went on to lead the movement to end Apartheid and set up a new democratic government.  He won a Nobel Peace Prize and became South Africa’s first black President.  And for me, one of the most amazing parts of his story is this: when he was inaugurated as President, his invited three of his prison guards from Robben Island to join in his inaugural celebration.

So instead of becoming cynical or despondent, or allowing himself to be consumed by bitterness and hatred, Mandela found it in his heart to forgive.  And even during all those years imprisoned on Robben Island, he never stopped believing that his country could move forward together as one nation in that same spirit of forgiveness.

While very few of us will ever encounter the kind of discrimination and brutality that Nelson Mandela endured, all of us can learn important lessons from his struggle.  We can learn about the importance of standing up for what you believe in, no matter what the cost.  We can learn about how, with self-discipline and courage, we can overcome the most unthinkable hardships.  And we can learn about the power of forgiveness to turn enemies into friends and help us move forward from a troubled past to a more hopeful future.  So I hope that you will read more about President Mandela’s extraordinary life and seek to live up to his example in your own life.