Weekly Wrap Up: This Week at the White House

November 21, 2014 at 5:08 PM ET by Kajal Singh
Twitter Facebook Email
Summary:
It’s been a busy week here at the White House. In case you've missed some of our top stories this week, here’s a recap.

It's been a busy week here at the White House. In case you've missed some of our top stories this week, here's a recap.

Photo of the Week:

We Took Action to Fix Our Broken Immigration System

More than 500 days ago, the Senate passed a bipartisan immigration bill -- but House Republicans have yet to vote on the legislation. In the meantime, the President is taking the steps necessary to move our nation forward and fix our broken immigration system.

In last night's address from the White House, President Obama laid out the executive actions he's taking to fix as much of our broken immigration system as he can. Check out some of the highlights from the President's address to the nation by clicking on the graphic below: 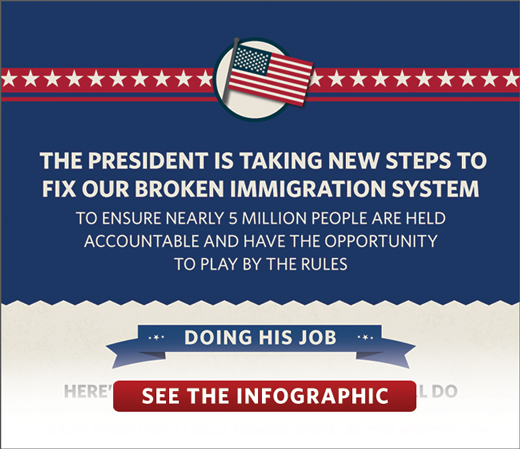 Take a look back at how Presidents from both parties have taken action on immigration:

Take a look back at how Presidents from both parties have taken #ImmigrationAction: http://t.co/eIjIo5SgVu pic.twitter.com/8bPyJ7QYmz

On Wednesday, the President signed S. 1086, the Child Care and Development Block Grant Act, into law.

What exactly will the Child Care and Development Block Grant Act do?

The new law, which reauthorizes the Child Care and Development Block Grant program:

We Launched a New Effort to Support Digital Learning

On Wednesday, President Obama launched a new effort to assist school leaders across the country in their transition to digital learning with the Future Ready Digital Pledge -- a part of the President’s ConnectED initiative.

Glad you asked. Below are some details about the initiative:

We Celebrated the 151st Anniversary of the Gettysburg Address

On Wednesday, we launched a new blog series called “This Day in History.” To celebrate the launch, we went back to 1863 and took a deep dive into the history of the Gettysburg Address. Check out some of the interesting facts from the post below:

We Received an Update on Ebola

On Tuesday, President Obama attended a meeting with his national security and public health teams to receive an update on the latest news regarding Ebola and our continued response in West Africa.

"Although we should feel optimistic about our capacity to solve the Ebola crisis, we cannot be complacent simply because the news attention on it has waned," he said. "We have to stay with it."

In his remarks, President Obama also addressed the horrific attacks that happened in Jerusalem on Tuesday morning.

“We know that two attackers senselessly and brutally attacked innocent worshippers in a synagogue during their morning prayers. Obviously, we condemn in the strongest terms these attacks. A number of people were wounded, and four people were killed, including three American citizens. So this is a tragedy for both nations, Israel as well as the United States.”