February 6, 2015 at 7:10 PM ET by Chris Evans
Twitter Facebook Email
Summary:
From releasing his Fiscal Year 2016 budget to speaking at this year's National Prayer Breakfast, the President had a busy week. See more in our latest Week In Review.

This week, the President released his fiscal year 2016 budget, talked with people who have benefited from the Affordable Care Act, welcomed DREAMers to the White House, and carried on a Presidential tradition of attending the National Prayer Breakfast.

Find out more about the past week at the White House in our latest weekly wrap-up.

The President Released His Budget

On Monday, the President released his budget for fiscal year 2016. Following up on his State of the Union address, the President's budget includes funding for Precision Medicine, combating climate change, and keeping America safe by properly supporting the Department of Homeland Security.

Also, as we’re able to communicate with more Americans than ever before, our budget presentation looks a little different than it did decades ago. See what’s new, and dig into the budget that makes the investments necessary to keep America growing.

The Affordable Care Act has helped millions of Americans – and many of them have written the President to say “thank you.” Ten of those letter-writers were at the White House on Tuesday to share their stories with President Obama.

While they come from different states and different backgrounds, each of them benefited by looking at their options for health care and ultimately getting covered.

Read and share the stories of these 10 Americans -- and if you still need to get covered, sign up at HealthCare.gov before the February 15 deadline.

Six young people visited the President in the Oval Office on Wednesday and had one thing in common: They were all brought to America by parents dreaming of a better life for their children.

We are a nation that welcomes strivers who want to earn their piece of the American Dream: http://t.co/DHHgh7htaD pic.twitter.com/oe16HlD3jS

These six DREAMers talked to the President about their stories and aspirations, and their experiences mirror those of millions more young people across our country. Take a look at their stories, and see how the President’s actions on immigration have transformed their lives.

The President noted that the breakfast offers a time to slow down and pause for fellowship and prayer, and gives him the opportunity to reflect on his own faith journey. He also laid out what he believes are three guiding principles for all of us: be humble, uphold the distinction between faith and government, and treat others as we want to be treated. 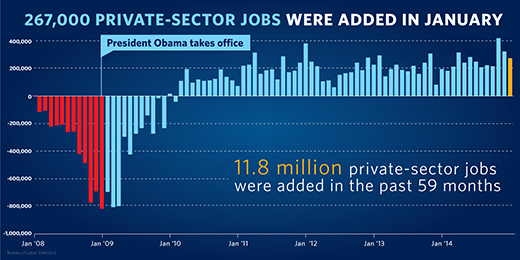 Take a look at this month’s job report and see how the American workforce is growing.