The Economic Benefits of the Affordable Care Act

April 2, 2015 at 11:49 AM ET by Jason Furman
Twitter Facebook Email
Summary:
The Affordable Care Act is generating major benefits for our economy by expanding access to affordable insurance coverage and reforming our health care delivery system to reduce costs and improve quality.

Earlier today, I spoke at the Center for American Progress about the major benefits that the Affordable Care Act is generating for our economy by expanding access to affordable insurance coverage and reforming our health care delivery system to reduce costs and improve quality. This blog post briefly summarizes my remarks, which are available in full here.

Since the Affordable Care Act’s main coverage provisions took effect at the beginning of 2014, we have seen a precipitous decline in the uninsured rate unlike anything since the decade following the creation of Medicare and Medicaid, and the nation’s uninsured rate now stands at its lowest level ever. A recent analysis by the Department of Health and Human Services indicated that, as of the early months of 2015, an estimated 16.4 million people have gained coverage, including both people who have gained coverage since the end of 2013 and young adults who gained coverage before 2014 due to the law’s option to remain on a parent’s plan until age 26. 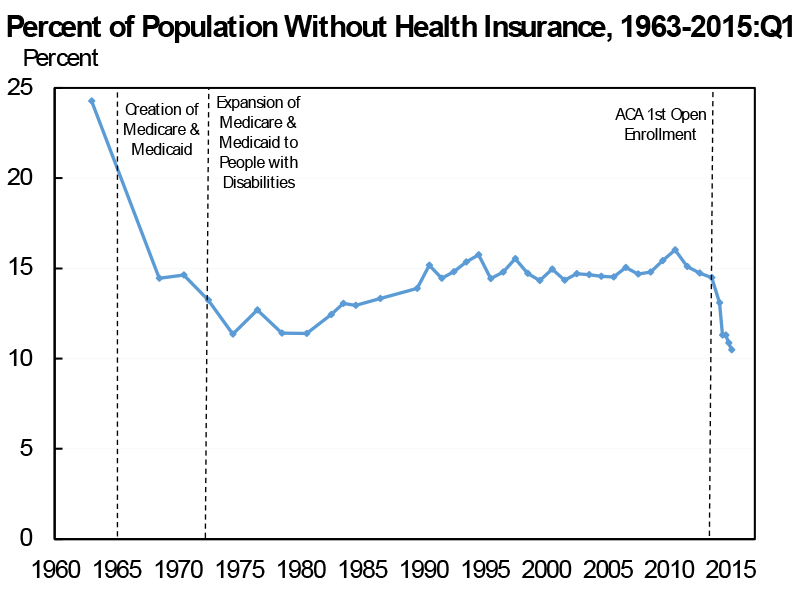 Economic research demonstrates clearly that this expansion in coverage is generating major benefits for the newly insured by increasing access to needed care, improving health, and enhancing families’ financial security. But, as I discussed this morning, expanding coverage also has important benefits for the labor market and the macroeconomy: 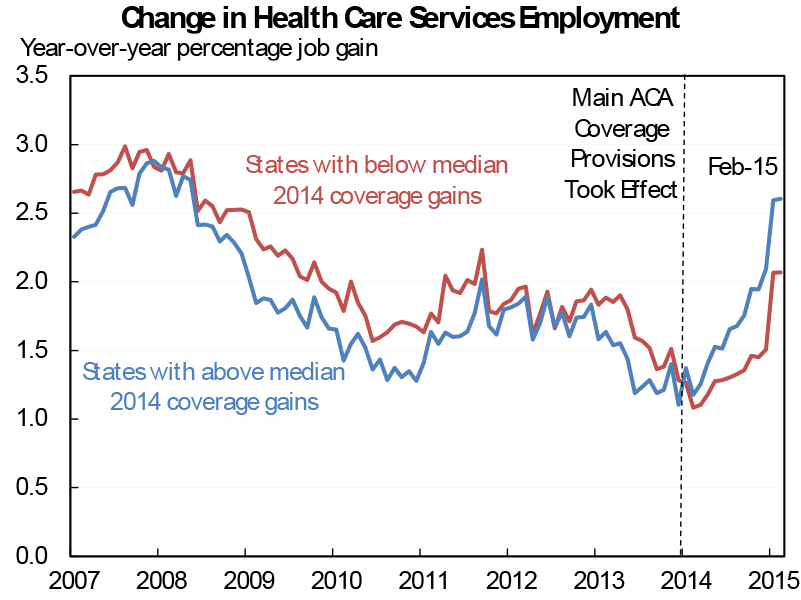 While one important goal of the Affordable Care Act is expanding access to health insurance coverage, another important goal is addressing long-standing shortcomings of our health care delivery system that have increased costs while undermining health care quality. Recent experience in both areas has been exceptionally encouraging: 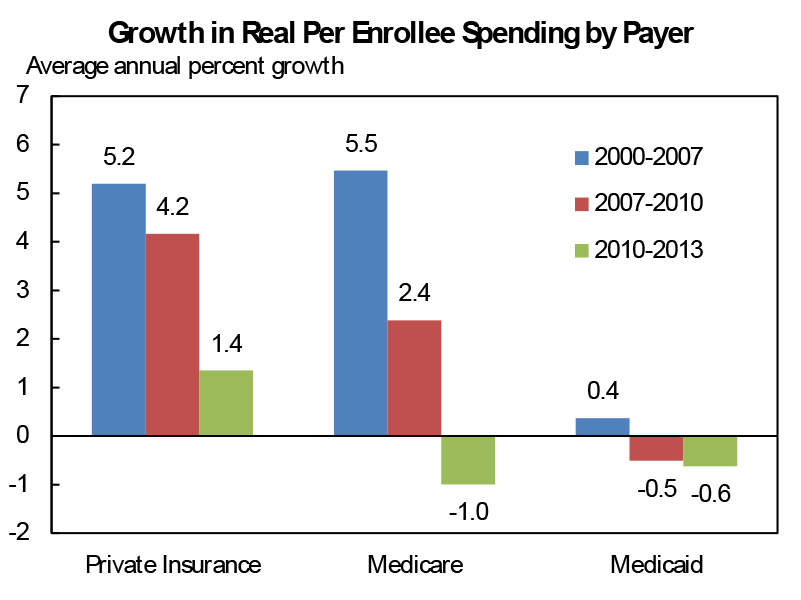 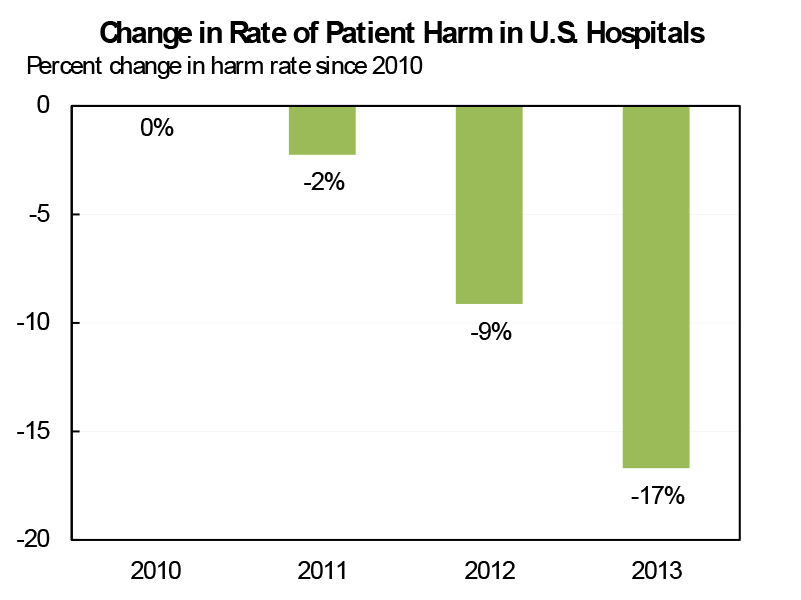 Although these reductions in health care cost growth and improvements in health care quality have many causes, there is no doubt that the Affordable Care Act is playing a role by reducing excessive payments to medical providers and insurers, reforming provider payments to reward efficient, high-quality care, and helping hospitals to identify and spread best practices. 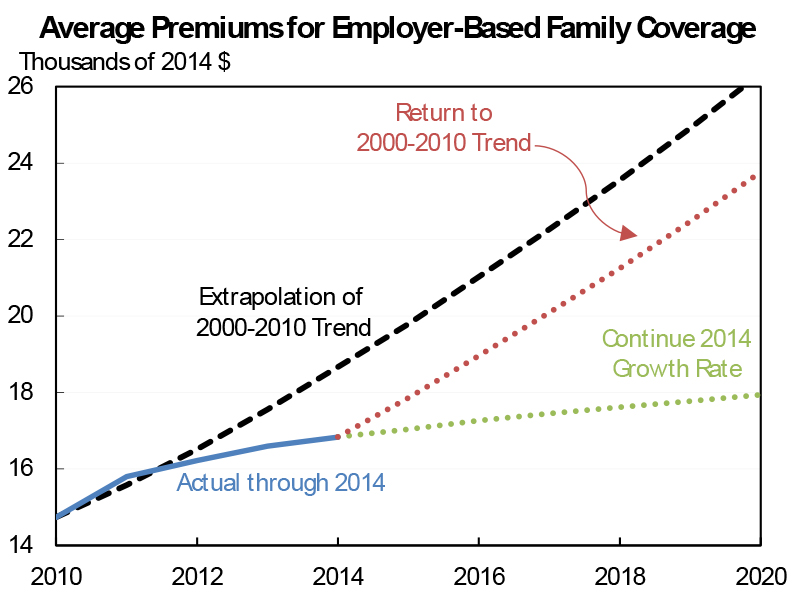 The implications for the job market and the fiscal outlook if even a portion of that slow health cost growth can be sustained are dramatic. Strikingly, the average family premium in employer-based coverage was about $1,800 lower in 2014 than if growth since 2010 had matched the 2000-10 average, and that difference will widen further if even a portion of the health slowdown continues. If we are able to sustain just one-third of the difference between the 2014 growth rate and the 2000-2010 average, then the average family premium would be an additional $2,100 (in 2014 dollars) below the pre-ACA trend by 2020, for a total of nearly $4,000 in savings.

A range of evidence suggests that significant savings are already being passed along to workers. For example, growth in worker’s premium contributions has slowed even more sharply than growth in total premiums and employers’ premium contributions. Indeed, the average worker contribution to family coverage in 2014 was about $900 below what it would have been had growth matched the 2000-2010 trend. Moreover, in the short run, the premium reductions may also be reducing employers’ compensation costs, helping to boost job growth, while economists expect the full savings to be passed on to workers over time.

Moreover, the deficit reduction associated with the Affordable Care Act and subsequent downward revisions in CBO’s projections of health care spending have been sufficient to cut the 25-year fiscal gap by more than half. 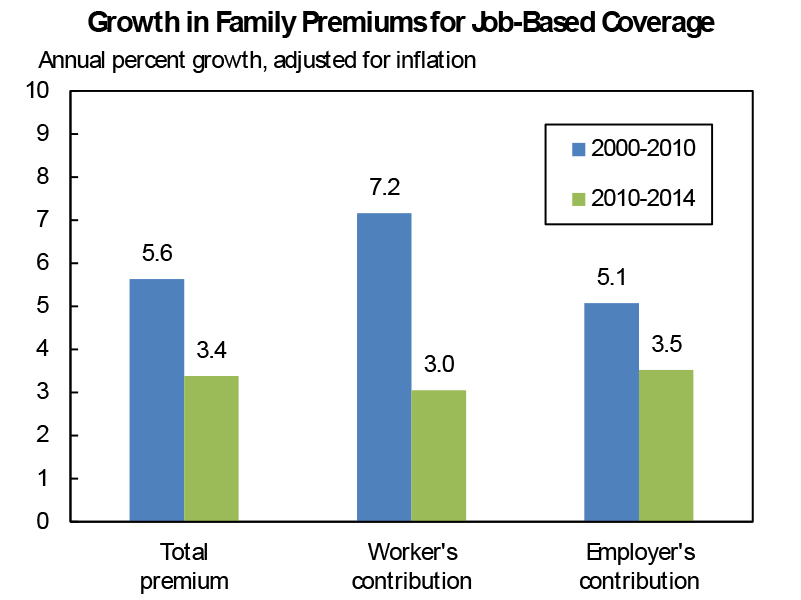 A Look Back at More Than Five Years of Doomsday Predictions

This morning, I also spent a moment reflecting on what the law has not done. During the debate over the law and the years that followed, we heard a stream of predictions that the law would cause economic catastrophe. To put it mildly, these doomsday prophecies have not come to pass.

One popular claim has been that the law would be a “job killer.” To the contrary, starting with the month the Affordable Care Act became law, our businesses have created 12 million new jobs over 60 months of continuous job growth, the longest streak of private-sector job growth on record. And over the last 12 months as the Affordable Care Act’s main coverage provisions have begun to have their full effect, we have created 3.2 million private-sector jobs, the strongest 12-month period of private-sector job growth since 1998. And, from 2013 to 2014, the unemployment rate declined by 1.2 percentage points, the largest annual decline since 1984. 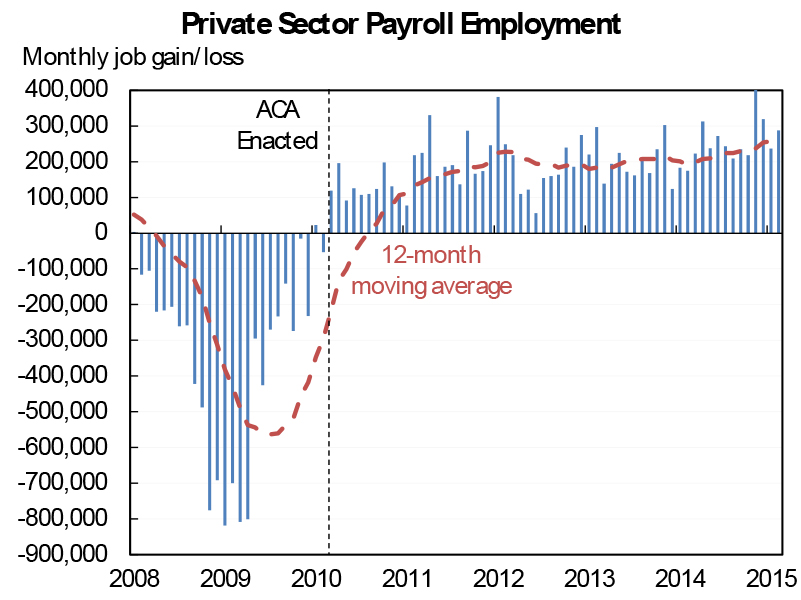 Others said that the law would create a “part-time economy” and drive a major shift toward part-time work. This too has turned out to be false. Since the Affordable Care Act became law, 101 percent of overall increase in employment has been in full-time jobs. In other words, part-time employment has actually declined slightly, even as overall employment has grown steadily. 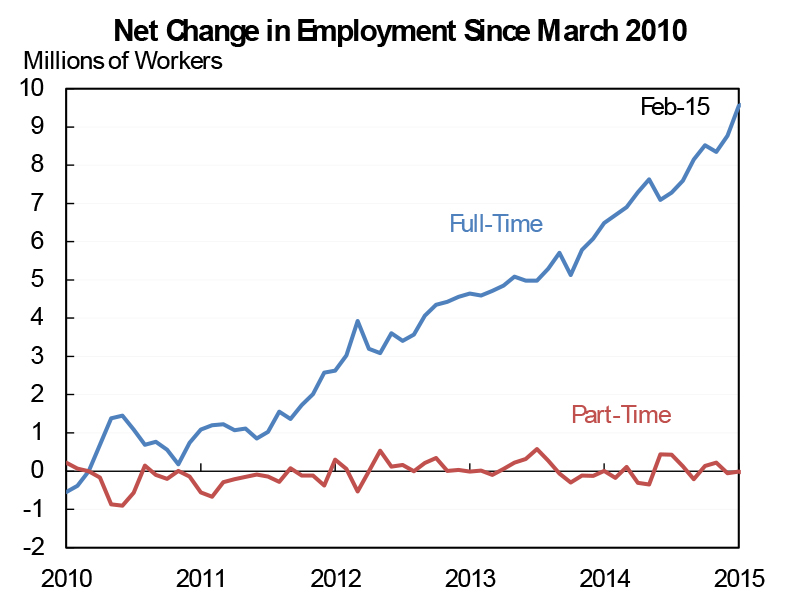 Likewise, many claimed that the law that was a “budget buster” that would explode deficits. To the contrary, over the past several years, we have seen the federal deficit fall by more than two-thirds as a share of the economy. And, more to the point, the Congressional Budget Office (CBO) has consistently predicted that the law will reduce deficits, particularly long-term deficits, generating savings of more than $1 trillion over two decades. If anything, the law’s fiscal effects are looking better than originally anticipated. Since March 2010, CBO has reduced its estimate of the long-term cost of the law’s coverage provisions by about one-third. 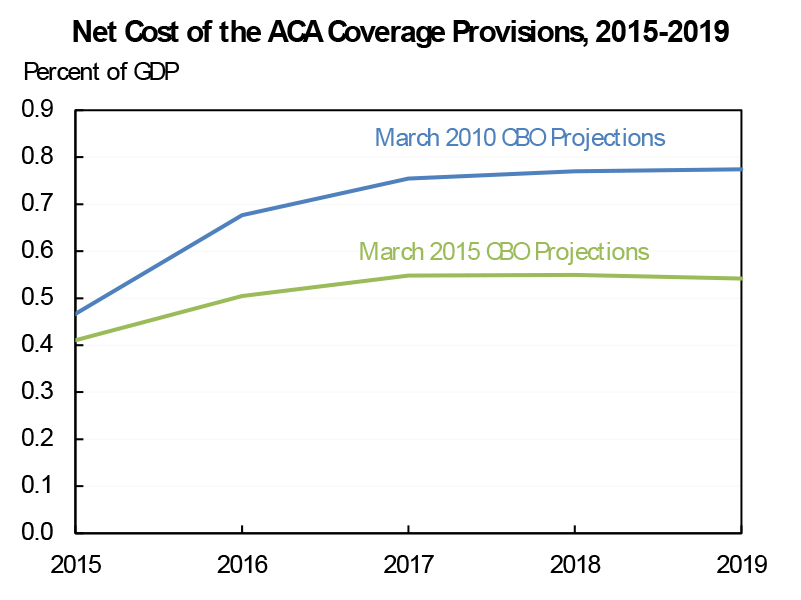 In short, the evidence is clear: Not only have the doomsday predictions of the law’s critics been decisively refuted by events, but the Affordable Care Act is working to expand coverage, reduce costs, and improve quality—all of which are also helping our economy.