August 26, 2016 at 9:30 AM ET by Jason Furman
Twitter Facebook Email
Summary:
Real GDP grew 1.1 percent at an annual rate in the second quarter according to BEA’s second estimate.

Second-quarter economic growth was revised to 1.1 percent at an annual rate, down slightly (0.1 percentage point) from the advance estimate. Consumer spending grew strongly at 4.4 percent in the second quarter—its second-fastest quarterly growth since 2006—and, in contrast to the pattern in recent quarters, net exports also added to GDP. Some of this growth was offset by a large decline in inventory investment (one of the most volatile components of GDP), along with declines in business fixed investment, residential investment, and government spending. Overall, second-quarter growth in the most stable and persistent components of output—consumption and fixed investment—was revised up to 3.0 percent. Today’s report underscores that there is more work to do, and the President will continue to take steps to strengthen economic growth and boost living standards by promoting greater competition across the economy; supporting innovation; and calling on Congress to increase investments in infrastructure and to pass the high-standards Trans-Pacific Partnership.

1. Real Gross Domestic Product (GDP) increased 1.1 percent at an annual rate in the second quarter of 2016, according to BEA’s second estimate. Consumer spending grew 4.4 percent, well above its pace over the prior four quarters, with faster growth in both durable and nondurable goods spending (see point 3 below). In addition, export growth was positive in the second quarter, and net exports contributed positively to GDP growth. However, inventory investment—one of the most volatile components of GDP—subtracted 1.3 percentage points from GDP growth. Fixed investment declined, weighed down by contractions in both equipment and structures investment as well as by a decline in residential investment following eight straight quarters of increases. 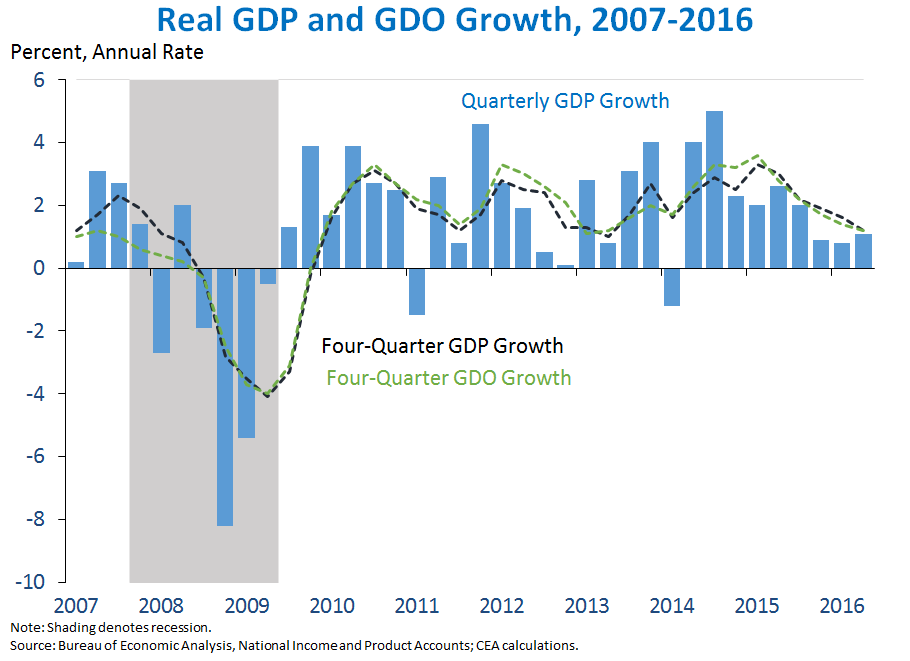 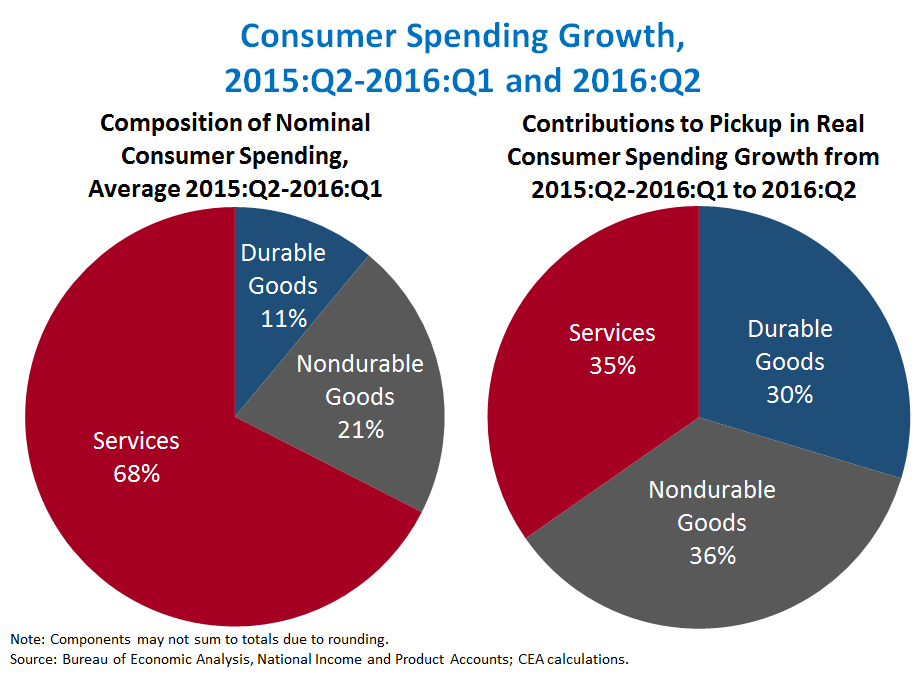 4. Slower productivity growth across many advanced economies over the past ten years can be traced in part to weak investment. According to the latest estimate—which does not account for the revisions to GDP growth in today’s report—overall labor productivity (real output per hour) in the nonfarm business sector decreased 0.4 percent over the last four quarters, reflecting faster growth in total hours worked than in output. Low productivity growth in recent years has been a global phenomenon, affecting nearly all advanced economies (though the United States has had the strongest productivity growth of any G-7 economy in the last decade). Labor productivity depends on three factors. The first, total factor productivity (TFP), measures how much output can be produced from a given combination of labor and capital, with increases largely representing advancements in technology. The second, labor composition, measures the quality, education, and training of workers. The third is the amount of productive capital available to each worker, with increases in this ratio, known as “capital deepening,” making each worker more productive. As shown in the chart below, all of the G-7 countries except Canada saw appreciably slower capital deepening from 2004 to 2014 than from 1994 to 2004, with this slowdown even larger than the slowdown in the combination of TFP growth and changes in labor composition in Germany, Japan, the United Kingdom, and the United States. 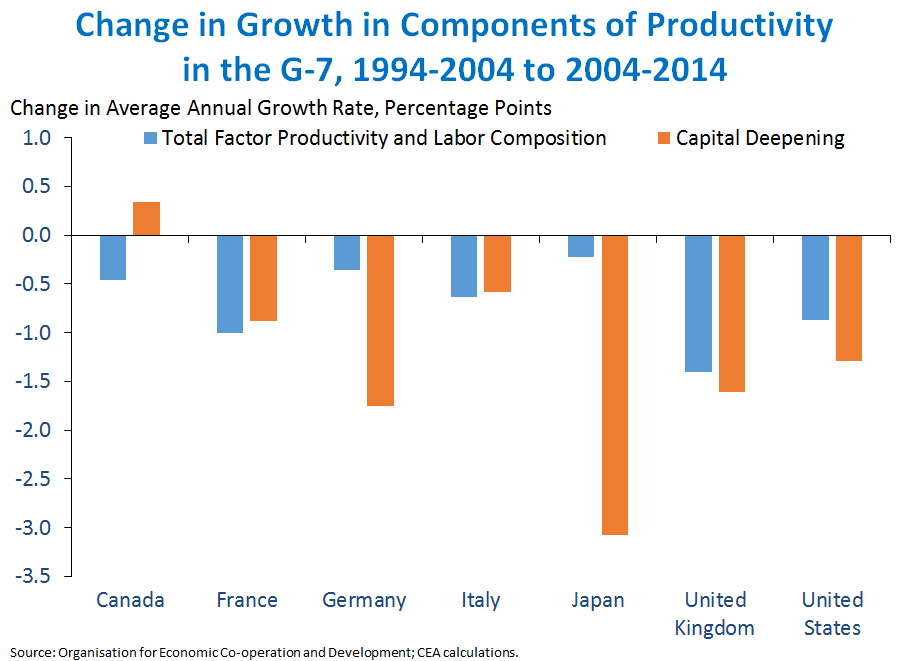 In part, the slowdown in capital deepening—which has been the largest contributor to the slowdown in labor productivity growth in the United States—can be traced to a shortfall in investment. This, too, has been a global phenomenon: in the advanced economies, investment was still roughly 20 percent below its pre-crisis trend in 2014, and weak growth abroad has likely weighed on investment in the United States. In the face of these headwinds, faster growth in investment (in addition to faster TFP growth) will be needed to boost productivity growth, the most important factor for raising living standards in the long run. Greater investment in infrastructure in particular can play an important role in boosting productivity and economic growth.

5. Real private domestic final purchases (PDFP)—the sum of consumption and fixed investment—rose 3.0 percent at an annual rate in the second quarter, noticeably faster than overall GDP growth. PDFP—which excludes more volatile components of GDP like net exports and inventory investment, as well as government spending—is generally a more reliable indicator of next-quarter GDP growth than current GDP. In the second quarter, the divergence between the strong contribution of PDFP to growth and the relatively slower growth of overall real GDP was almost entirely accounted for by the large negative contribution of inventory investment. Overall, PDFP rose 2.3 percent over the past four quarters, above the pace of GDP growth over the same period, as both inventory investment and net exports weighed on growth over the past four quarters. 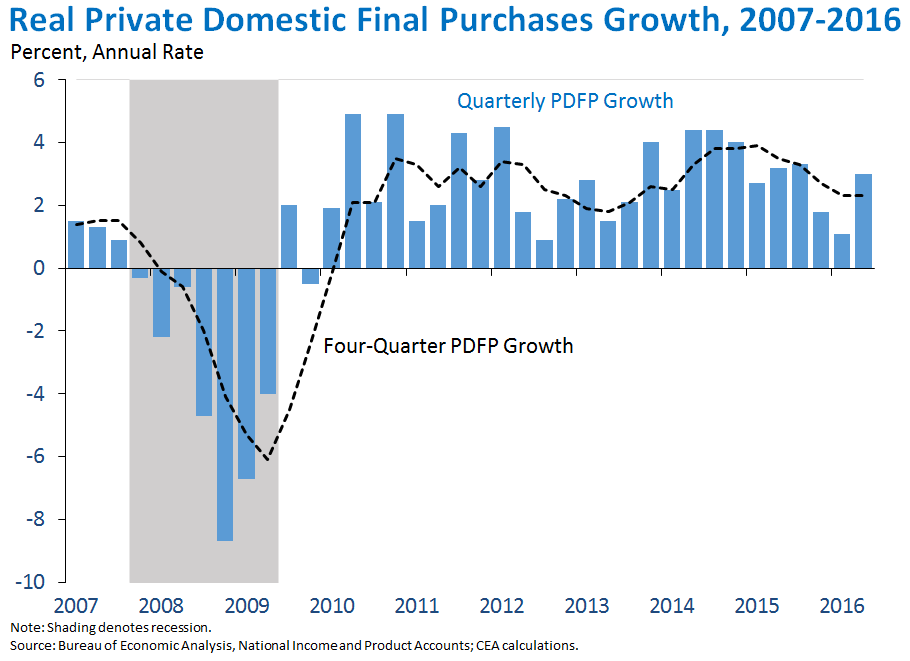