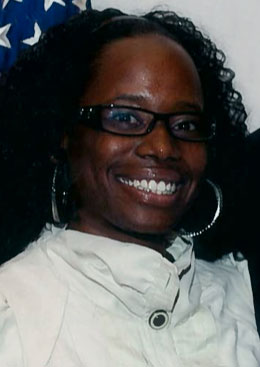 Tamara Washington hopes Congress passes the American Jobs Act. Provisions included in that bill that will affect the long-term unemployed "allowed me to start back on the ladder, which I am still climbing." The single mom from Torrance, California thinks others should be afforded the support she had when she needed help. (by)

Tamara Washington is a single mother whose main priority in life is taking care of her 3 year old son, Amir. Washington, who lives in in Torrance, California hopes Congress passes the American Jobs Act, because there are provisions in that bill that can change people’s lives. Washington knows that from experience, because she benefitted from one of the programs that will be extended if the American Jobs Act is passed.

Washington lost her job at Hunter Douglas early in the economic crisis, and she struggled mightily to find another. “I could be homeless right now. I can never forget the experience – I was at a bad place. When you are out there trying to find jobs, you’re not sitting at home, you are out there looking and no one is hiring. My unemployment was running out, my son was an infant and I was afraid I was going to lose my home.”

Fortunately for Washington, she received a “blessing” in the form of subsidized employment in the Temporary Assistance for Needy Families (TANF) Emergency Contingency Fund, which enabled her to obtain a job and support her son. “It allowed me to start back on the ladder, which I am still climbing.”

Through her TANF job, Washington learned all new skills in visual technology and sales. “I started out at a lower rate, but what I learned enabled me to get another job somewhere else and I got a lot more money. The program funded my training and gave me the experience to get the job I have now and I can take care of my son.”

Washington says the American Jobs Act will help many families in her area which was hit hard by the economic crisis. “A lot of people lost their businesses and then people lost their jobs, and if you are not making any money you can’t take care of your daily needs. Families have been  displaced from their homes after losing their jobs, they are not able to take care of their children. With no source of income they are not able to be productive.”

And most of all, Washington says the Jobs Act is important for our nation’s children. “Teachers should be the last to be laid off, they are teaching our children, who are our future. You have to start somewhere and with no education, you start from nowhere.”