October 11, 2011 at 7:00 AM ET by Ari Matusiak
Twitter Facebook Email
Summary:
Chris Yura says "We have the people that want and need jobs; we need to invest in them" 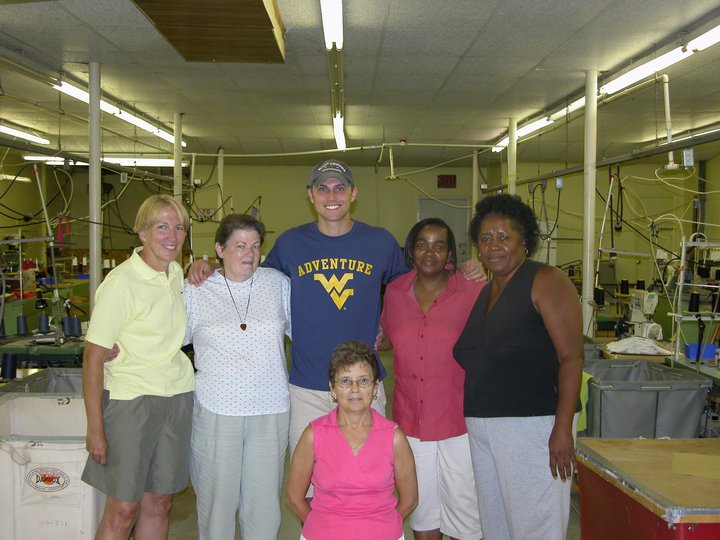 SustainU's Chris Yura, center, with workers Carolina Cut ' N Sew in Mt. Gilead, NC, where his line of environmentally-friendly apparel for colleges and universities is produced.

The payroll tax holiday on all new hires and wage increases that is part of the American Jobs Act will help Chris Yura of SustainU and his manufacturing partners in West Virginia, North Carolina and Tennessee "free up much needed capital to continue growing in our community and in other areas of the country as we look to expand."

Yura is especially drawn to the tax credits for hiring the long-term unemployed and for hiring service-disabled veterans that are provision of the American Jobs Act. “The growth and potential of our business lies solely in our American contracted manufacturers. Giving our partners in manufacturing the ability to rehire skilled workers increases our productivity and will change the global scope of apparel manufacturing. We have the people that want and need jobs; we need to invest in them.”

When Yura was a fullback for Notre Dame, he wore his Fighting Irish uniform with great pride. Yura recognized the power of the school’s signature apparel by the excitement generated in the stands when they took the field, and saw “The Shirt” bring people together even far  from the college stadium. After graduating in 2003, Yura spent five years modeling in New York City where he became particularly interested in the sustainable fashion movement and was frustrated to learn about the misleading character of the “green” clothing movement.

Yura saw an opportunity to combine his interests and experience and do something on his own. His dream was to create a more authentic garment that embodied his own social, environmental and economic values.  In June of 2009, 28-year-old Yura founded SustainU, a line of environmentally-friendly apparel for colleges and universities that is made in the USA.  SustainU has grown to nine full-time employees operating in four factories. SustainU’s apparel is made in the southern textile regions of the United States from 100% recycled materials; the business model has created 400 textile jobs while reducing waste and environmental stress in West Virginia, North Carolina and Tennessee. Yura says that by partnering with small businesses on production (two spinning factories, three knitting factories and four cut and sew factories), “our model is one that encourages people to hire back the unemployed and keep our existing workers in their communities.  We understand that these business owners want to keep people working and with every order we receive we can help them keep the doors open.”