April 5, 2012 at 9:23 AM ET by Ronnie Cho
Twitter Facebook Email
Summary:
This week's "For the Win" spotlights Evan Ducker, a high school student who wrote a book to raise awareness and educate others about birthmarks.

Evan Ducker attends John A. Coleman Catholic High School in Kingston, N.Y. He created and self-published the children’s book, Buddy Booby's Birthmark, based on his personal experience living with a facial vascular birthmark. Evan is a member of the 2011 PARADE All-America High School Service Team, an award recognizing outstanding young service leaders presented by Parade Magazine in partnership with generationOn, the global youth enterprise of Points of Light.

According to published medical journals, many children with birthmarks develop psychological and self-esteem issues as well as suffer from depression and anxiety (especially in social situations). Additional research showed, children with noticeable birthmarks “suffer a significant degree of social stigmatization and have lowered levels of self-esteem,” causing an “adverse effect on social development.”

I have a facial port wine stain, and I don't think kids’ lives should be adversely affected, just because they’re born with a mark on their skin.

Throughout history, birthmarks (and the people who have them) have been portrayed in literature as hideous, evil, ugly, ashamed, lonely, and other primarily negative connotations. Even the medical community needs more education about birthmarks – as evidenced by a recent statistic from the Minnesota Vascular and Birthmark Center stating “over 60 percent of all vascular birthmarks are misdiagnosed”  (vascularbirthmark.com). Some insurance companies are ignorant to the fact that birthmarks are not cosmetic issues. They are medical issues that pose no public threat, but can pose tremendous challenges (both physically and emotionally) for the children who have them – particularly if there's no common understanding or tolerance. 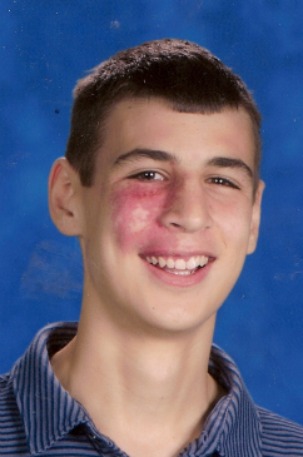 Because many children with birthmarks face multiple surgeries throughout their time in school, it’s important to educate their classmates before they develop prejudice based on misinformation. In 2006, after creating a children's book called, "Buddy Booby's Birthmark," I began receiving thousands of emails from parents of children with birthmarks. Despite coming from many different countries, they all shared similar stories about their children having a 'hard time' in school. Most of the struggles were due to the negative treatment they received from classmates. Many of these families invited me to visit their children's schools to share my book. On my days off I visited as many schools as I could. I spoke to thousands of students and answered hundreds of intriguing, intelligent questions about birthmarks from kids as young as 4-years-old.

I found that just 30 minutes of education and discussion immediately changed attitudes about birthmarks and towards the people who have them. But, I couldn't possibly get to every school in every country. So an organization suggested I create an actual reading 'event' in conjunction with their annual "Day of Awareness" campaign. The "International Buddy Booby's Birthmark Read-Along for Tolerance and Awareness" was born.

The Read-Along is a group effort to educate early school-age children about birthmarks and open the lines of communication between teachers and students about relevant topics such as tolerance, diversity, prejudice and the pressures for 'physical perfection'. Teachers (from both private and public schools anywhere in the world) register on-line and promise to read and discuss the children's book, "Buddy Booby's Birthmark" with their students on May 15. Schools from 26 countries haveparticipated to-date.

Early feedback from the program proved that, when armed with the facts children are less likely to fear, shun, or ridicule individuals with birthmarks. In turn, school became a less 'threatening' place for kids with birthmarks. By introducing the concepts of tolerance, compassion, diversity and global thinking to students in early grades (K-5), children with birthmarks will have a better shot at experiencing less anxiety, bullying, and self-esteem issues throughout their time in school.