For the Win: Parramore to Morehouse

Shanta Barton-Stubbs was recently selected as a 2011 L’Oreal Women of Worth honoree. Points of Light partners with L’Oreal to celebrate “women of worth” for their inspiring devotion to service.

In the summer of 2006, as a 21-year-old college student, I decided that I needed to make a change. When my parents moved their church to a new area, the Parramore community of downtown Orlando, Fla., I was astounded at the lack of resources and support available. Parramore is notorious for its low income residents, high crime rates, drugs and violence.

Community involvement has been instilled in me since I was young. I felt compelled to do something for the kids of Parramore, they were acting out and hanging out in the streets, putting themselves in dangerous situations. They needed a place to escape and just be kids. In response, I began the New Image Youth Center at the church to serve as a safe haven and positive activity center for the at-risk youth.

Since I started the center, I've not only seen a change in the kids, but a change in myself. Giving the kids a true family environment has allowed them to see their full potential. Throughout the seven years that New Image has been open, we have seen no cases of pregnancy, college drop outs or trouble with the juvenile system – in a community where this was the norm. My kids have been able to rise above what is expected of them and have learned to expect more of themselves. 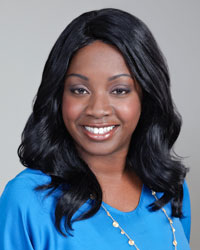 Service has become who I am. I don’t live in Parramore, but it has become my community. All of the youth at the center have their own families, but they have become my kids and we have become a family. Service is important to me because it has given me a family of people who want change for the community and want change for themselves. Serving the youth at my center has taught me that the impossible is possible and change can come from just a few passionate individuals.

Community involvement is also something I instill in my students, teaching them the value of giving back through feeding the homeless and giving away gently used clothing. We teach the youth that no matter how little they have, they are always in the position to offer service to others with what they do have. As President Barack Obama has stated, "Change will not come if we wait for some other person or some other time. We are the ones we've been waiting for. We are the change that we seek."

I've always upheld the hope and belief that as my kids grow and rise above the influences in the community, that they will come back and remember where they came from. That they will serve the community that made them who they are. I hope that through becoming civically minded individuals, they can in turn help make a change in the community. If my kids recognize this, we can start a new cycle of change, prosperity, and community, rather than a cycle of poverty, drugs, and violence that they were accustomed to before coming to the New Image Youth Center.

Through my own service, I have learned so many hard lessons and become a stronger person all while forming relationships with amazing people, and that's why I think it is important for other young people to be involved. I think it's important for young people to learn outside of the classroom, outside their comfort zone. Through my service, New Image currently has six students in college, one of which is at Morehouse University, the first student to leave the Parramore Community and make it to Morehouse in 10 years. New Image has given these youth a chance they never thought they had. We have dedicated our lives to help make the lives of these youth better, to help them create a new image for themselves.